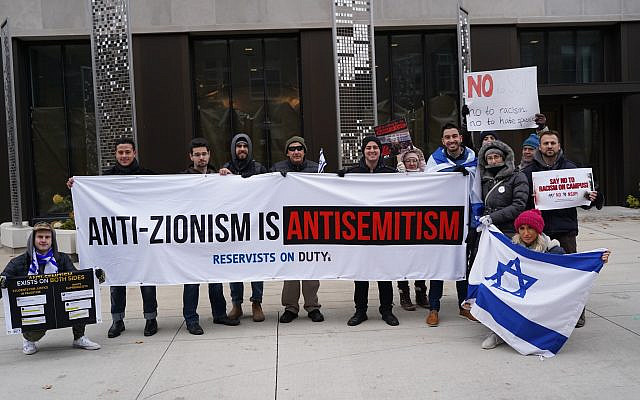 Reservists on Duty fight hate one person at a time -- and sometimes a whole bunch.

How do you fight all the noise, the accusations and curses hurled at anyone who dares to support Israel? How do you make people stop and think? Those attempting to combat the rabid anti-Zionism and anti-Semitism on social media know how disheartening that can be. Many give up in despair. Leaving the haters in their bubbles of hate.

Reservists on Duty, an Israeli NGO established by IDF reserve soldiers in 2015, is one of the organizations that show us how it is done.

A Reservists on Duty team landed back home in Israel last week after a ten-day trip to the United States; I spoke with Jonathan Elkhoury about 20 minutes before he boarded his flight in Texas to find out how it went.

He told me a story: Last year, at a pro-Israel table at Houston University during Apartheid Week, he was approached by a man who told him he is against Zionism and believes Jews do not have the right to a state. Elkhoury identified himself as a Christian Israeli and asked the man if he is a human rights activist. When the man said “yes”, Elkhoury simply asked him: “So how can you call yourself a human rights activist if you deny the Jews their human rights?”

From the expression on his face, Elkhoury could tell he was taken aback, shocked perhaps. The discussion heated up and Elkhoury, diplomat that he is, found a way to end it.

This year, Elkhoury saw the same man at an event organized together with Houston Hillel. This time, he came to listen. It seems that members of Hillel had followed up on that incident and had continued to engage him in discussion.

“We hugged,” said Elkhoury, “and he told me he is going on a trip to Israel later with a group — not with Birthright, of course, because he is not Jewish. He still considers himself pro-Palestinian, but he is more moderate now and accepting of the Jewish state.”

And this is one of Elkhoury’s goals: to show people that one can be pro-Israeli and pro-Palestinian simultaneously. “Pro-Palestinians think we are against them,” explained Elkhoury. “We are not. We don’t mind you [Palestinians] wanting your own state, we mind you wanting to take ours away.”

Jonathan Elkhoury (27), a graduate student in political science and communications, is director of the Reservists on Duty Minorities Project, established three years ago. It fights anti-Israeli activism by showing them Israel in all its complexity. “People have almost never met Israeli minorities,” Elkhoury explains. “By sharing our life stories, they can connect to a side of Israel they knew nothing about.”

On this trip, Elkhoury was joined by Atif abu Nagi, (21), a Muslim law student from Nazareth, Magd Bader (26), a Druze student from Hurfeish in the Galilee pursuing a degree in Government Studies, and Baruch Mor (33), an American Jew who immigrated to Israel at the age of 15. They led discussions at Colombia College in New York, the University of Houston, at a community event organized by FIDF (Friends of the IDF), and a Maccabi Hatzair (youth movement) event for 180 high school students aged 16-18 in Miami.

“It’s important to speak with kids who are the next generation,” said Elkhoury. The high school pupils and university students had many pointed questions for the Minority Project speakers. They asked if it is really fair to call Israel a democratic country when it is a Jewish country. They asked whether or not the minority citizens of the state really do have equal rights. They wanted to know why it is considered antisemitic to criticize Israel. And one person asked how they feel about the national anthem, Hatikva.

Abu Nagi said that he sings Hatikva. Elkhoury added: “if you have a problem with Hatikva then you are saying that everything is perfect and you are only dealing with this small issue of a symbol. What is important is that we can take part in the political process and have [minority] members of Knesset and ministers.”

There are problems of course. Abu Nagi admits that the minority will always feel “less than”, simply because “another language is the official language, another culture is the main culture that runs the country.”

Yet, the non-Jews of Israel are free to pursue their dreams. “There is no law in Israel preventing a member of any minority from being prime minister,” Bader said.

Abu Nagy remarked on the changes within the Muslim community in his hometown, Nazareth. “Ten years ago it was very different,” he said. “Now on Israel Independence Day you can see lots of Israeli flags. The Arabs are starting to feel more fully a part of the country, more Israeli.”

And that is the message the Minorities Project is bringing to those outside the country who think they are doing anyone a favor by slandering Israel.

Feature image credit: screenshot from the Facebook page of Reservists on Duty.