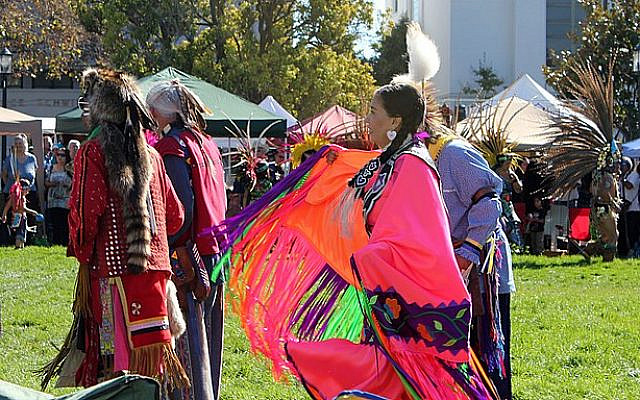 Sometimes it takes the wrong holiday to get us to the right one.

“Our country was conceived on a promise of equality and opportunity for all people — a promise that, despite the extraordinary progress we have made through the years, we have never fully lived up to,” the President wrote. “Today, we recognize Indigenous peoples’ resilience and strength as well as the immeasurable positive impact that they have made on every aspect of American society.”

It is not coincidental that this day, October 11, is the day that the United States is also observing as Columbus Day. In recent years, groups from across the country have rejected Columbus as a representation of the violence against Indigenous peoples perpetrated by Columbus himself and by the colonial powers that followed him to the “New World.”[2] Indigenous people have been pointing this out for decades. The rest of us are finally starting to take notice.

These days, many of us see Columbus Day as a celebration of European dominance and a rejection of those the Europeans pushed aside to conquer the Americas. However, Columbus Day was initially created as an expression of America’s multicultural nature. Columbus Day as a national holiday was first introduced in 1892[3], partly in response increasing violence against Italian immigrants. Columbus Day was meant to celebrate the Italian contributions to the country.

More than 100 years later, the idea that Italian Americans need to be protected seems pretty silly. We classify Americans of Italian heritage as just another group of European Americans, part of the privileged white majority. We forget that at one time, Italian immigrants were considered outsiders. In the 1880s, Italian immigrants were the focus of bigotry and were “maligned as sinister and criminal.”[4]

I have recently seen suggestions that celebrating Italian Americans is a reasonable goal but perhaps they should have chosen someone else to celebrate? Galileo, maybe? This idea reflects our modern sensibilities, not those of the 1890s. The choice of Columbus to celebrate was not accidental. It was meant to remind people that Italians had actually been in the Americas longer than the English. The idea that Columbus’ actions could be called atrocities would not have occurred to them – the US was still committing those atrocities. In the 1890s, the armies of the US were doing their best to violently crush any possibility of free or independent Indigenous nations.

We have come a long way since then. We recognize the peoples who were here when Columbus landed and who continue to be a vibrant part of the American community. We acknowledge the atrocities we have perpetrated against them in the years since that landing and how we still fail to live up to the promise of equality and opportunity. We appreciate the importance of acknowledging those actions, and more importantly, of celebrating those people.

Bending the arc of the moral universe

Martin Luther King told us that “the arc of the moral universe is long, but it bends toward justice.”[5] Bending toward justice is not a simple process, though. It takes multiple steps. In retrospect, some of the early steps may seem wrong. But without those initial steps, we cannot see where we really need to be.

Indigenous People’s Day is, in truth, not the final step. By saying “Indigenous People,” we are still lumping together wildly different cultures. As we develop celebrations for this new holiday, I hope we will find a way to acknowledge each of these cultures for themselves. I hope we find a way to separately celebrate the Pamunkey and the Wampanoag, the Tlingit and the Hupa.[6]

Perhaps the next step is a holiday to celebrate Sequoyah.[7] A brilliant inventor, he created a syllabary to write the Cherokee language, transforming the Cherokee Nation into a literate society in the space of a few years. This amazing feat, one of the few times writing has been invented in recorded history, is worthy of celebration in its own right, irrespective of his heritage. But representation matters and as a Native American, Sequoyah represents the ingenuity, drive, and resourcefulness of his people, and should be an inspiration for all people.

[2] The Europeans called it the “New World,” but it was, of course, not new to those who already lived there.

[6] The Pamunkey live in Virginia, the Wampanoag in Rhode Island, the Tlingit in British Columbia, and the Hupa in California. These are all living tribes with living cultures. These are, of course, only a few of the many tribes, living and dead, that we should be celebrating on this day.

[7] I would not presume to tell the Indigenous community who their heroes should be, but Sequoyah is one of mine. For more information about him, see georgiahistory.com/education-outreach/online-exhibits/featured-historical-figures/sequoyah.