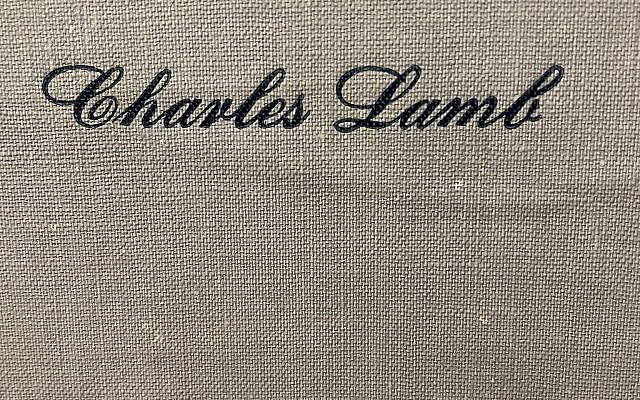 Lying before me, as it does at the start of each year, is Charles Lamb’s essay “New Year’s Eve,” written for the January issue of London Magazine, 1821. No matter how poorly scored the past year, (this latest performance was particularly inharmonious), the twelve-movement symphony will at least be given an eloquent coda.

Lamb manages to make New Year’s, most public of public holidays, a solitary and most personal affair. The essay is wistful, pensive, playful, full of inky sentimentality, pathos in plenty. And like all Elia essays, biographical particulars are encrypted within the text. (Decoding such allusions compounds the pleasure for the Lamb enthusiast. ELIA’s anagram— A LIE).

Enduring literary compositions are rather banally declared “timeless,” but Lamb’s essay (immortal as it is), is all ado over time’s fleetingness. “New Year’s Eve” is a panegyric to the past, less a felicitation to the future. While others are lifting the curtain to a birth, Lamb is throwing the pall over the freshly departed. His midnight tribute— that stilled moment when the coin of time, turning over, is suspended upright on its edge— is more fit for a funeral than a bris.

The peal of the bells signals, not a ringing in, but a ringing out of the Old Year, which prompts a great deal of introspection on “all I have done or suffered—in that regretted time.” Looking back, Lamb will not admit the slightest alteration, any more than he would alter “the incidents of some well-contrived novel.” Not the seven fallow years spent in “thrall to the fair hair, and fairer eyes, of Alice W——n.” Not even the duplicitous uncle who bamboozled him out of an inheritance, lest he lose the arresting image of that “specious old rogue.” The past, being composed of more solid material than that of the inchoate future, provides surer ground for living. Moreover, its scenes can be manipulated at will. Foes can be forgiven, trysts can be revisited.

Ask your innermost self to choose between the following: would you rather have the idea of love, though it remain distant, unrequited, or lost? Or, to avoid the pain of its absence, never have had the experience of it withal? I know on which side I fall (this last word chosen deliberately).

That all this indulgent retrospection can appear sickly, maudlin, he is himself aware. There are possible explanations for this, such as, being without offspring, he adopts the image of his childhood self as his heir.

Indeed, he traces the germs of this idiosyncrasy to childhood. Even at the fledgeling phase, the “midnight chimes” which would induce everyone else to frissons of mirth, brought to his mind “a train of pensive imagery.”

The tone is intimate, delivered as if relaying a confidence. This is especially the case as it delves into thoughts on mortality, with its ineluctable implications:

Shall I confess a truth?…I begin to count the probabilities of my duration…I care not to be carried with the tide; and reluct at the inevitable course of destiny.

I am in love with this green earth… I am content to stand still at the age to which I am arrived;…I do not want to be weaned by age; or drop, like mellow fruit, into the grave.

Reverence for what has been is rivaled by dread of what will become:

Sun, and sky, and breeze, and solitary walks, and summer holidays, and the greenness of fields, and the delicious juices of meats and fishes, and society, and the cheerful glass, and candle-light, and fire-side conversations, and innocent vanities, and jests, and irony itself–do these things go out with life?

Note the appreciation of irony for its own sake (italics his). For the writer, the faculty which allows him to seize on and appreciate irony is of vital importance.

Of the possible loss of his literary possessions he speaks as would a paramour taking leave of his lover:

And you, my midnight darlings, my Folios! must I part with the intense delight of having you (huge armfuls) in my embraces?

One suspects Charles Lamb would have welcomed quarantine. Though preventing his habitual perambulations through the congested streets of his venerated London (that “multitudinous moving picture”), whose very smoke he loved, the prospect offered by endemic disease of being bound to the hearth will have appeared sufficient compensation.

The compass was for him a purposeless instrument, and his ignorance of the points on a map was properly twitted at by Coleridge &co. He was perfectly at home— if this doesn’t sound too quaint— at home. He would spend long evenings with his prized folios, duodecimos, Quartos—his “midnight darlings” Burton, Fuller, Smollett, Fielding, Sir Thomas Browne, Richardson, Marvell, Drayton, Drummond of Hawthornden, Cowley, Duchess of Newcastle, all-hallowed Shakespeare— names “which carry a perfume in the mention.” So far as dead literary acquaintances go, excellent company.

(And were it not for his Specimens of English Dramatic Poets Who Lived About the Time of Shakespear, those other Elizabethans— Marlowe, Jonson, Webster, Ford, Dekker, Massinger, Kyd, Beaumont, Fletcher, among others— may conceivably have remained, to use W.S. Landor’s fine evocation, “mushrooms that sprang up in a ring under the great oak of Arden.”)

Lamb’s essays are already written from the isolated viewpoint: the carnivalesque world parades round, but Lamb, detached from the multitude, is a sequestered observer.

The true pandemic which plagued Lamb was more domestic. The line between genius and madness is a romantic (and treacly) literary conceit. But it loses its mien of romanticism in the case of the Lambs, for whom lunacy, a paternal bequest, loomed ever above (or rather, within) their hapless heads.

In a letter to Coleridge we find Lamb forwarding the news of mental breakdown with almost mocking flippancy, as if asylum-confinement were an unplanned stay at a roadside hostelry:

My life has been somewhat diversified of late…[This period] your very humble servant spent very agreeably in a madhouse at Hoxton. I am got somewhat rational now and don’t bite any one. But mad I was!

The family mental heirloom was for him not again to be taken out of its precarious vitreous casing. For Mary, his sister, the protective pane was thinner.

Any skimmer of the headlines from the news-sheets of Charles Lamb’s life has doubtless come across the following tragic clipping:

On the evening of 22 September, 1796, as the family were preparing for dinner, Mary Lamb, in an aspect of madness brought on by work exhaustion, fatally pierced their mother through the heart with a case-knife. Lunacy was the verdict brought by the coroner, and Charles became legal guardian to his sister. This solemn assignment was met without grievance, as one would expect of any brother who could write of a sister: “I wish that I could throw into a heap the remainder of our joint existences, that we might share them in equal division.” The spectre of mental degeneration accompanied them always. Among the regular items packed for any holiday excursion was invariably found a grim incongruity— a straitjacket, neatly stowed by Mary herself.

In spite of the overworked embraces, the eternal expressions of short-lived rapport, and all those sacrificed corks— post-celebration, we all are liable to the anticlimactic feeling which is solitary and personal and lonely. We are aware, if latently, that another year has elapsed, which means less for elapsing, and few of us, gazing back, are ever replete. Without a certain dissatisfaction, there would be none of that telling tradition, ‘making resolutions.’ Perhaps this is partly reason we exhibit togetherness with such din and disport: we desiderate the solidarity of fellow players, unwittingly called to the table in the first place, when another chip from the slimming pile before us has been abruptly confiscated by the dealer. Underneath the fêting, the fraternizing, the raucous goodcheer, the effulgent, almost insistent good time, we are obliquely aware that another mark has been notched, and there are only so many grooves. With each puncture in the belt, is a tightening. To announce any new chapter is perforce to mention another’s end, but we are always surprised when yet (this yet grows increasingly emphatic) another year has passed, no matter how many times we count down from ten as its coffin is recast into the depthless humus of time.

This, in part, is the reason for all our making merry— we holler (literally) in the direction of the new, at least partly to advert our gaze from what will lie forever in the other direction. New Year’s Eve is essentially the expiration date to the year, and when it arrives we chug from the carton. We party hardest at the occasion most fit to remind us of the party’s inevitable end. Accordingly, then, the publicized delirium, the projected jubilation, the endless salutations— exultant orisons for a better harvest. Lamb simply bypasses the pretense.

This essay originally featured on New Year’s Eve in The Punch Magazine.