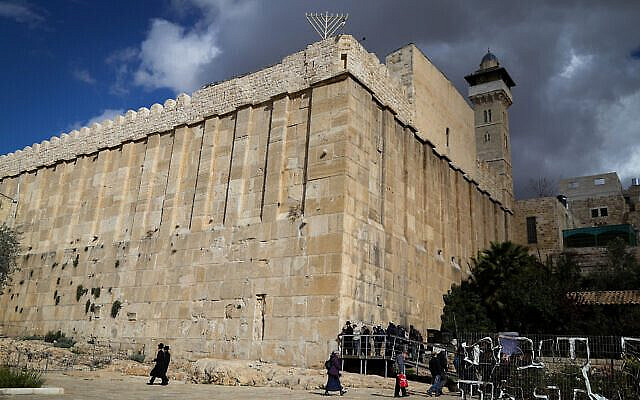 The Tomb of the Patriarchs in Hebron (Gershon Elinson/Flash90)

When attending a funeral, one usually listens to the eulogies, continues with the procession, and then the person who passed away is taken to burial. That is the usual course of things. Yet, in this week’s Parsha, we find the process of burial to be strangely out of order.

“And Sarah died in Kiryat Arba, which is Hebron, in the land of Canaan, and Abraham came to eulogize Sarah and to weep her. And Abraham arose from before his dead, and he spoke to the sons of Heth, saying, “I am a stranger and an inhabitant with you. Give me burial property with you so that I may bury my dead from before me.”

Abraham sees Sarah die; he weeps for her and eulogizes her. Yet suddenly, after the eulogy comes to the negotiation for the burial plot, his discussion with the children of to buy the cave of Machpela. Why does Abraham not place his eulogy close to the burial after he buys a piece of land for Sarah’s grave?

Commentaries, troubled by this chronology, give different explanations. Rashi explains that Abraham must have been coming from Be’er Sheva to eulogize her. Rabbi Naftali Zvi Yehuda Berlin, also known as the Netziv, follows this line of Rashi. He explains that as Abraham was coming along to bury Sarah, many of those who knew of her greatness joined him and the crowd assembled so that Abraham ended up giving his eulogy right then and there.

Taking a different path, the late Rabbi Samson Raphael Hirsch explains that Abraham’s pain for Sarah was most personal and intimate. When hearing of Sarah’s death, Abraham closed himself in his home and mourned for Sarah. He wept privately as his pain for her was most intimate. It is only once he properly wept for her that he put on his public face, went out, and engaged with the children of Het to arrange for a funeral befitting Sarah’s honor.

Yet there is another way to explain what is happening here. The late Rabbi J. B. Soloveitchik famously explains the dichotomy of Abraham telling the children of Het that he is both a Ger–a stranger–and a Toshav– a resident. Rabbi Soloveitchik explains:

“Abraham’s definition of his dual status, we believe, describes with profound accuracy the historical position of the Jew who resides in a predominantly non-Jewish society. He was a resident, like other inhabitants of Canaan, sharing with them a concern for the welfare of society, digging wells, and contributing to the progress of the country in loyalty to its government and institutions. Here, Abraham was clearly a fellow citizen, a patriot among compatriots, joining others in advancing the common welfare. However, there was another aspect, the spiritual, in which Abraham regarded himself as a stranger. His identification and solidarity with his fellow citizens in the secular realm did not imply his readiness to relinquish any aspects of his religious uniqueness. His was a different faith, and he was governed by perceptions, truths, and observances that set him apart from the larger faith community. In this regard, Abraham and his descendants would always remain “strangers.”

These words of Rabbi Soloveitchik capture the essence of what it means to be a Jewish minority throughout the millennia. We balance being part of society while being apart from it. When Abraham came to eulogize Sarah, he attributed this Jewish quality to her. Abraham eulogized Sarah and told the Hittites: “I have been a resident and a stranger among you. My ability to lead a separate life while being part of your society is thanks to my wife, Sarah.

Furthermore, Chief Rabbi Jonathan Sacks explains: unlike Noah, who responds to his grief over a destroyed world with drunkness and shame, Abraham responds to grief over the loss of Sarah by securing the future of their children in the land of Israel and securing the future through finding a wife for their son Isaac. This is Abraham’s eulogy for Sarah, the woman who enabled all these qualities.