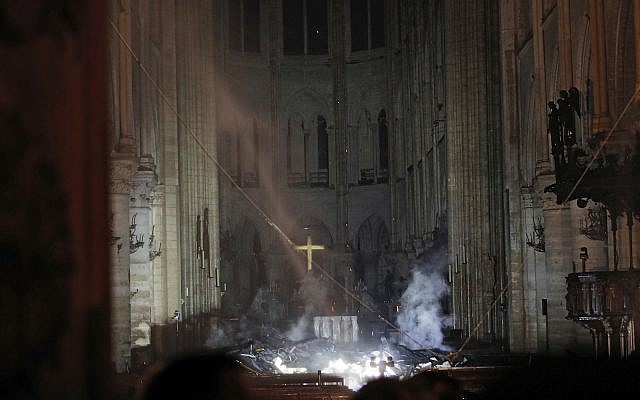 Smoke is seen in the interior of Notre Dame Cathedral in Paris, Monday, April 15, 2019 (Philippe Wojazer/Pool via AP)
I used Notre Dame cathedral for the purpose for which the old stonemasons built it: prayer. Awed adoration not of architecture but of the Architect. And today I’m sad. Just like most everyone else.
I first discovered the place at 20 while studying in Paris at a school of international relations. The place was not far from my classroom. And as I walked in, I knew – was sure I knew – what I was walking into. Just as I had back in Wisconsin, just as I had anywhere I ever went, I was walking into church.
I was a bit impatient with the knot of noisy people around the only open door with the huge sign, Entrée. Then, as now – at least until yesterday – the cathedral was used as a sort of pressure-release valve for tired tourists disappointed by Paris’s constantly wet weather. I remember explaining to Japanese tourists as I stood uncomfortably in a line to confess my sins to a priest that the confessional-box was not just another attraction on the tour.
Walking in, shuffling in, I prayed. I prayed by name for the members of my family who were not there with me. I thanked God for the privilege of seeing the place myself. I tried to notice the architectural details I had read about in my fat American guidebook on cheap pulp paper, but what I really saw were the motifs on the windows and in oils on the walls – saints and sons and stories of astounding drama that I know as well as my own story. When you’re Catholic and you go to church, a family follows you.
As everyone knows, Notre Dame means “our lady.” The reference is to the Virgin Mary, whom Catholics also call the Blessed Mother. Going to the cathedral felt like coming home to mother. And, like mother, the place seemed stable and settled in what it was. It was ready calmly to give me its embrace. As if it knew I’d be by, one of these days.
As old and large as it is, Notre Dame represents something older and larger than itself. Through Catholic eyes, it is not a prime example of architectural innovation in the late 12th century. We don’t see the flying buttresses first. It is not in its essence the site of tragic desecration – of French revolutionaries defecating in chalices upon its high altar and beheading the statues of the kings of Judea because, in their stupidity, they thought they were French kings. It is not simply the backdrop of the Hunchback of Notre Dame, whether by Hugo or by Disney, nor is it mainly — though it was — the stage for the burning of the Talmud. A friend turned me on to a lament composed by the Maharam of Rothenburg after the burning of the Talmud in the mid-1200’s right in front of Notre Dame. I hear this is said on Tisha b’Av:
״ולכן אשרי שישלם לך גמוליך, צורי בלפיד ואש, הלבעבור זה נתנך כי באחריתך תלהט אש בשולייך״
(Therefore praised be He Who has paid you your recompense. My Rock, in torch and fire, has struck you. Is it this that He has given you? For, at the end of your time, a fire will burn at your edges.) Hamevin yavin.
***
When I was just out of school, I worked at a monthly magazine whose editors and writers were Protestants, Catholics and Jews, working together. Above all the genuine intellectuals and all the hopeless luftmenschen that came through that office, the true mistress and maven of the place was a Jewish lady from Chicago whom I will call Miss Bremen. Miss Bremen never married.

She had been raised in the Thirties, as she put it, “a red diaper baby“ — by a vociferously Stalinist, and angrily atheist, father. She came to New York as a young woman after the War in the short golden age of the American theater, only to see the theater collapse in a heap of absurdity. “I remember seeing those actors strip off and smear themselves with finger-paint, and since I was in back with my usher’s light I had a front row seat: a trickle at first and then a flood from the audience got up, turned their backs, and went out the door. And all I could hear were the big padded doors going ‘flump, flump, flump’.”

I was working in Miss Bremen’s office a few years after 9-11. The place was on Fifth Avenue, so on that disgusting morning she had a plumbline-view of the towers on fire at the bottom of the island. Here, years later, between refilling the Mister Coffee and picking up labels from the printer, Miss Bremen stopped. Without any prompting or apparent provocation, she took her stage and declaimed, “These people just don’t get it.” She was talking about her fellow New Yorkers; her fellow Americans.
“These people think that all this is just going to go on. They think it will never go away. The riches. Consumption. They guess they’ll always have enough to eat and they can’t imagine a place where someone would club them over the head just for stepping out the door. Stupid people! Take away the foundations and the whole thing collapses. It could be gone tomorrow. Just like that.”
*** 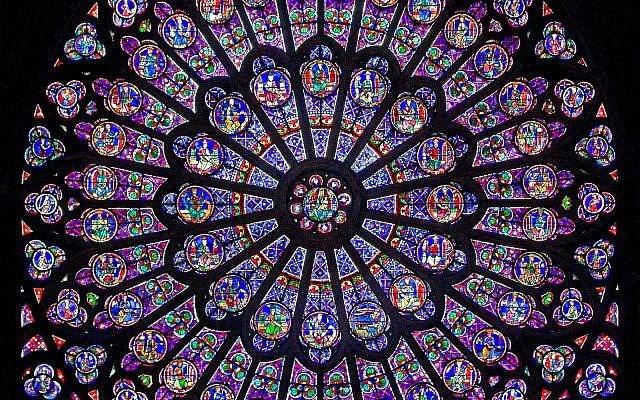 When I close my eyes and think of Notre Dame, the image I retain is the mirror of the one most tourists are impressed with. They come in facing the altar and so they progress, along the indicated track, with their backs to the rose window above the organ pipes over the monumental doors. But I was Catholic when I lived in Paris, as I am Catholic now, and through an excess of zeal I joined the student choir. For weeks we practiced a repertoire that was painfully French: lots of spun-sugar phrases; light and airy rhythms. We were preparing for a mass to launch the Advent season.

And then we were all there, stuffed behind the main altar with our backs to the front and our fronts facing backwards, positioned so as to welcome the scruffy student-faithful as they streamed in. The piercing royal blues of the famous rear window stood out against the blackness. They lent their hue to the tips of shoulders and the tops of heads and to stray strands of hair. The churchgoers, as they came, seemed to be gliding over the floor of a deep lake.
As I look at my computer screen this morning, the image I think I will remember is not blue but red: a picture taken after sunset last night. It’s an aerial shot. The scientific purpose of the photographer and his editor was probably to show the full extent of the damage: what happens to a church when its entire roof goes up and the flaming wood of forests from 800 years ago falls down into the sacred space.
From above, though, the image is unmistakable: it’s a glowing red cross. This cathedral, like so many others, is constructed in the shape of a giant cross, the nave transected by the apse to form a sort of lowercase t.
The old roof died last night, and, dying, it beamed its message: In the cross of Christ I glory, towering o’er the wrecks of time; all the light of sacred story gathers round its head sublime. (That’s what John Bowring wrote in 1825, and the Christian is hip to it still.)
The cross is there, right in the middle of Paris, stuck in the eye of the city of Robespierre and Madame Pompadour and Puccini. Stuck in the ear of the planners and the smooth-shoed technocrats who want to make the world faultlessly neat. Stuck in the craw of a vain city. And there, for now, it stays.
This afternoon, Notre Dame is a stinking black trench. But the void is cross-shaped: cruciform. Who can look away? No one who knows the cross. Try to forget me, try to unsee me, try to avoid me, I’m here.

All distances in France are measured, by tradition, from “point zéro” – a marker showing the geographic center of Paris. Point zero is incised in the pavement on the Parvis-Notre-Dame, the cathedral square. That, looking from the air, puts it right at the foot of the cross.

This is the cross as lodestar or magnetic north. Remove it and the charts are off. The compass needle wobbles sickly around its orbit with nothing to point at. Just ask Miss Bremen, who brews coffee in Flatiron still: Stupid people! Take away the foundations and the whole thing collapses. It could be gone tomorrow. Just like that.
About the Author
Born in Wisconsin, Erik Ross is a priest of the Dominican Order who lives in Switzerland and comes often to Israel. For many years, he was stationed in Poland. He has long been active in Jewish-Christian conversations. He writes here with the permission of his major superior.
Related Topics
Related Posts
Comments