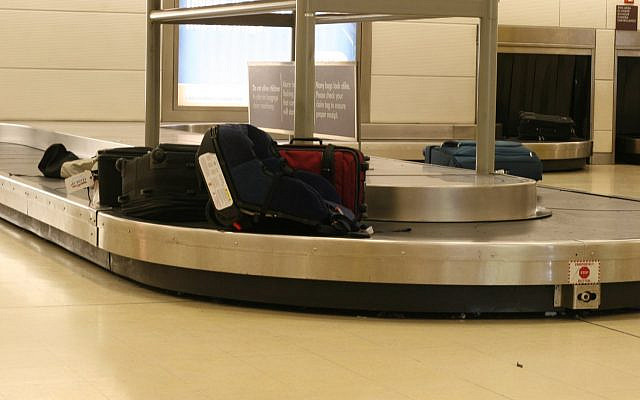 A few weeks, a story on social media went viral … perhaps you saw it because someone shared it with you, but if not, I’ll summarize here.

Rabbi Barry Kornblau’s daughter was planning to fly home from Israel, but one of her luggage pieces was overweight. A man who was with his teenage son at Ben Gurion Airport saw her plight, and offered to check her bag as one of his bags — since he had a luggage weight allowance that he didn’t need. The two of them had already connected with each other waiting on the long line, and realized they knew many people in common.  Just as they approached the check-in counter, he spontaneously offered her this very kind gesture, and she accepted.

After he checked in, Rabbi Kornblau’s daughter began checking in.  At that moment, the two of them realized that she was heading to Newark Airport… but he and her luggage item were heading to JFK Airport.  On different airplanes!

So she called her brother, who was planning to pick her up in Newark, but he couldn’t get to JFK to get the luggage.  So she called her father, who then spoke to the man who checked in her luggage to obtain pick-up parameters. Rabbi Kornblau found out that he and the luggage would soon be in Woodmere.

Rabbi Kornblau immediately posted a message on Facebook, seeking someone traveling between North Jersey and the Five Towns, and sent a similar email to the Teaneck Shuls listserv.   He received a reply from a Teaneck resident, who was traveling round-trip to the Five Towns that day, and who offered to pick up the luggage at the man’s house. (Amazingly, three other people make similar offers!) The luggage was picked up later that day, and dropped off at the owner’s door. The young woman retrieved her bag eight hours after landing. All because of the kindness of a stranger.

It’s truly an amazing story of chessed in our community.  However, what’s most remarkable to me is that many of us within our community likely would have performed the same thing – and that this unusually kind action is almost taken for granted.

It shouldn’t be.  Our community is blessed with an enormous capacity to perform acts of kindness, and to help out others in need.  While we often might hear stories of our friends performing chessed, we should recognize that these actions are part of what makes our people special.

In March 2020, when our world was turned upside down after the COVID-19 pandemic, a WhatsApp group called Making Mitzvah Moments was created in our community in Stamford.  Initiated by Rabbi Daniel Cohen of Congregation Agudath Sholom, its purpose was to facilitate the performance of chessed for those in need.  Deliveries of food and other essentials were made by volunteers to homebound seniors, and buddies were assigned to call them to stay in touch.  A young Stern College student volunteered to tutor students online and help them with their studies.  An individual who was able to secure hundreds of N95 masks offered them to community members free of charge.  Dozens of other acts of kindness were able to be expediated through this online communication group.

This WhatsApp group in and of itself is impressive.  However, what’s most interesting to me is that more than two years after the height of the pandemic, the group is now stronger and larger than ever, with close to 200 people signed up to assist in performing various chessed projects.  It seems that in this case, “mitzvah goreret mitzvah,” one good deed will bring about another good deed.

This weekend, our community will be hosting a panel in which two Jewish educators will be discussing the subject of “Money, Materialism, and Modern Orthodoxy.  No doubt there will be talk about the extravagant weddings that many in our community make, the expensive Pesach programs some of us attend, and the general need and desire to “keep up with the Schwartzes.”

While this a timely and worthy discussion, I think it’s important to realize that quietly and without fanfare, there is also an enormous amount of money that our community provides to charitable organizations that make sure that the needs of those who are less fortunate than us are taken care of.  It’s difficult to criticize those living in million dollar homes and taking expensive vacations when those same individuals are giving large amounts of tzedakah and engaging in other acts of chessed.

Many people will likely read this airline story, and proudly proclaim, “Mi k’amcha Yisrael” – Who is like your people, Israel!  However, Rabbi Kornblau pointed out that this kind of story might have also happened in other tight-knit communities.  And based on a comment he received to his Facebook post from a Pakistani man, he likely is right.

Nevertheless, Rabbi Kornblau pointed out, “…these community features have been central to Jewish survival and even prosperity during our long exile. For centuries, they enabled Jews to trust one another across long distances, and successfully trade, marry, exchange sensitive information, and more.”

It’s reassuring to know that we are part of a community that historically has taken care of one another (although you still might want to weigh your bag before going to the airport on a trip!).