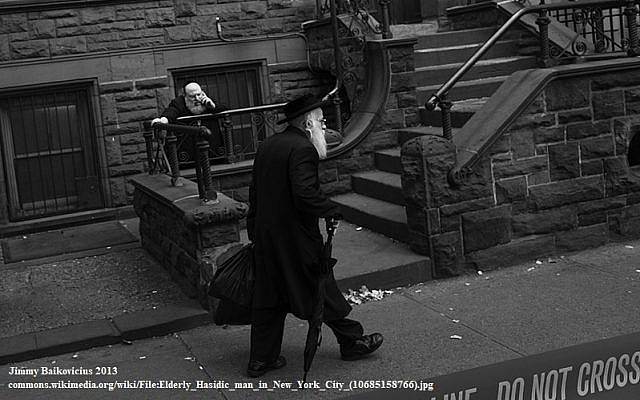 Ninety-nine years ago in New York City gangs went marauding through the city assaulting any man seen wearing a straw hat. It was after September 15th, a time of year the mob had decided was well past the respectable cut-off date for such fashion headgear.  The rioters knocked off hats, stomped on them, impaled and set fire to them.  Thousands wound up fighting in the streets from the Bronx to the Battery in the Straw Hat Riot of 1922.

A century later there’s a new hat-knocking fad being revived today. Angry assailants are emerging from where anti-Semitism percolates, attacking random Jews in the streets of major American cities, the focus of their ire being the shtreimels worn by Hasidic Jews. Sometimes the attackers simply knock off the religious hat, on other occasions they’ve been stolen, and occasionally a punch in the face accompanies the interaction.

The irony is that Jews in the past had very often been legally constrained to identify themselves by their dress—Jewish women in Italy, for example, required by law to wear ear rings, yellow veils, red overskirts depending on the region—and subject to fines and punishment for failure to do so.

It’s more than ironic, however,  that the supposedly liberal, progressive, inclusive and welcoming leftist administrations which plague so many large US cities  haven’t a thing to say about Jews being harassed in a public space they often allow to lapse into disorder, riot, looting, chaos and lawlessness. Jewish concerns for simply being able to stroll peaceably down the sidewalk are shunted to the side by politicos who’ve created a new urban zeitgeist in which Jews had best keep their heads down in public.

The anti-Jewish signals from those leaders having shanghaied and distorted what used to be liberalism are clear and plain. The sloganeers, boycotters, radicals, Israeli flag-burners and the rest aren’t welcomed in decent political parties in the West—but a red carpet has been rolled out for them by the Democrats, the very party American Jews cling to in one of the most inexplicably bizarre unions in history.

It’s certainly not paradoxical that the extreme militants among the anti-Semitic constituencies in Democratic Party circles should take advantage of the winks and nods that indicate open season on Jews. The great mystery though is what impels 75% of the Jewish-American electorate to traipse to the polls every two years to vote for the very party that does everything in its power to advise them that it doesn’t care for them in the slightest, and in fact, has quite a few bones to pick with Jews and Judaism.

Armenians are hardly well-represented in Pan-Turkic parties across Asia, and the Parmahutu in Rwanda never saw its first Tutsi seek membership into their virulently anti-Tutsi party. Yet Jewish-Americans vigorously support the party of Keith Ellison, Rashida Tlaib, Ilhan Omar,  and Linda Sarsour, the party of BDS, the party whose national delegates flashed thousands of “Free Palestine!” placards for a nationally televised audience during the 2016 Democratic National Convention. What are Jews doing—Armenians, Turks, Hutus, Tutsis and everyone else should ask—among this assembly?

Jewish-Americans aren’t asking themselves that question but they should because attempting to placate one’s captors, oppressors and bullies has never worked, doesn’t work now, and never will. Jews should know that better than any people on Earth.