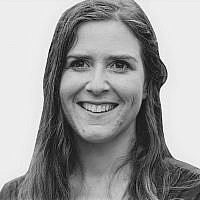 The Blogs
Rishe Groner
Apply for a Blog
Please note that the posts on The Blogs are contributed by third parties. The opinions, facts and any media content in them are presented solely by the authors, and neither The Times of Israel nor its partners assume any responsibility for them. Please contact us in case of abuse. In case of abuse,
Report this post. 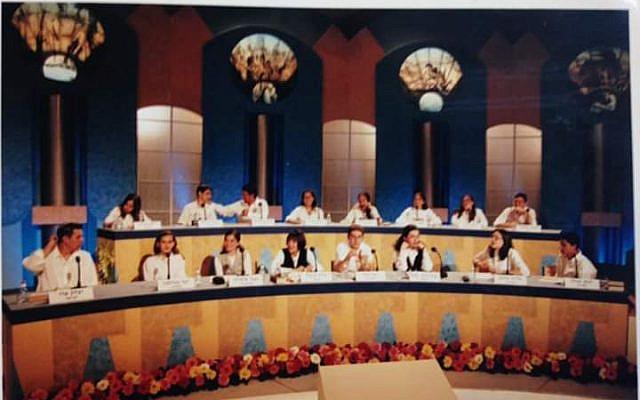 Photo of the top 16 contestants in the final round of the Chidon HaTanach in 2000. The author is second from right in the back row. Photo courtesy of Merav Fima Saidoff

I was one week into my first trip to this land, spellbound most of the time.

I was fourteen years old, and I had spent most of my life feeling left out. Socially, spiritually, intellectually. Somehow, I could never be me.

And now, here I was. I’d found a place, a community, a way of being that finally validated so many aspects of myself, something i hadn’t yet experienced at that point in my life.

As a representative of Australia at the international Chidon HaTanach (Bible Quiz), for the first time in my life I found myself surrounded by people my age who also loved, lived and breathed the ancient book that had become my obsession in those years.

Those two weeks, back in May 2000, I stepped into myself in a way I never had before. It changed me for life. Suddenly I had permission to share, to be, to laugh and to lead. I became more outgoing, more open, more alive. I felt what it was like to be in the center, not at the sidelines, for the first time in my life. My new friends were teenagers from all over the world, and my curiosity and excitement over new people pushed me past my shame over my Australian-day-school accent and I began to speak Hebrew to people whose native tongues were Russian and Spanish and Hebrew.

I was surprised, but probably shouldn’t have been, to find that we had far more in common than that which kept us apart.

Sure, we dressed differently, and liked different music, and had different ways of practicing our Judaism. Some of us had ICQ, some of us were into AIM, others MSN. (This was a big deal.)

But we were all head over heels for Tanach, and as we rode our epic tour buses across the country, every random Tzomet was another place we recognized from the books we held in our hands.

It was the first time I felt like I could be unequivocally me. I was seen for who I was, and could start to blossom into the person I have since become.

I learned there was more than one way to practice Judaism, and that there could be space for us all at one Shabbat table; at one campfire, in one stressful backstage dressing room at the Jerusalem Theatre.

Some of us were Orthodox, and gravitated towards a group of girls who until that point had rarely socialized in mixed-gender environments. Others were traditional yet not observant, but the most Jewishly practicing family in their home town; and some were deeply passionate Dati Leumi Israelis. There were those who read books of Jewish law for fun; and those whose Judaism came from Tanach and only Tanach. It shook me up, opened my eyes, and made me recognize that there were so many ways to be, so many pathways leading to the same destination.

Twenty years later, I’m back in Israel, this time for an extended period of study, now indefinite thanks to the global pandemic. I imagined this year would be my chance to revisit where the magic began. On Chanukah, I attended the adult’s contest and sat side-by-side with a fellow alum of Machane 2000, as we called ourselves, our twenty year reunion. As he murmured the answers under his breath, I was alternately shocked and disappointed when I either nailed a quote or had absolutely no idea where it came from in Tanach. We made plans for this year’s Yom Ha’atzmaut festivities, and I wondered if I’d see those teens wandering around as we did, filled with the glorious discovery of life when you’re not alone in your weirdness, your geekiness, your obsession with Torah and tradition.

Humans plan, God laughs, and today I’m here in this country, listening to celebrations around me. They resonate differently to me now than they did then, having spent the last decade or so almost disengaged from thinking about Yom Haatzmaut, a complicated day for me since childhood, and one that I commemorate differently each year. In college, we drank and danced to Israeli music; and in New York we’d commemorate Yom Hazikaron and discuss our complicated history. The last few years, I attended intentional gatherings, celebrating the magic, reflecting on the challenges, and wondering how I could grapple with my complicated feelings.

Now, after eight months here, reconnecting to the earth under my feet, the people around me, the tradition that holds me and the Torah that flows from this sacred space, I’m commemorating my personal Yom Ha’Atzmaut.

The independence day that I celebrated 20 years ago, when I came into my own. When I realized that I could be anybody I wanted to be. When I made friends who are soul family for life, including those I just caught up with recently after decades feeling like no time at all had elapsed.

When I learned to be who I am, my crazy weird geeky song-singing people-loving Bible-bashing self without fear or anxiety or shame.

When I started speaking my broken Australian-accented Hebrew, asking to be interviewed on the radio, because I was so exhilarated that the language of my books was now a living language, to be spoken out loud, here, to the people. When I became unafraid to share, to speak, to live.

When I found the threads that tie us all together are infinitely stronger than I’d ever imagined, uniting us from Uzbekistan to Panama to Romania to Canada to Australia to Spain to Costa Rica to everywhere in between. It was my moment of becoming me, becoming part of the Jewish people, and starting me on the path of who I am today.

I love this complex land. I love that I have had the immense privilege of walking on it for eight months, being held in the history and the mystery. I am thirsty, curious, concerned, grateful. Soaking up the spiritual revolution I see taking place, learning the Torah that is bursting forth from this earth, seeking my place in bringing harmony and Tiferet to this region, wondering what I was brought here to do at this time. Amidst the pain of yesterday’s Memorial Day and the joy of today’s Independence, and the complication of what all those mean for our relationship with our neighbors and our ancestors and our future generations, I am here for reflection, gratitude, and resolution to do the very best I can to honor the earth I walk on, to do justice to the stones I tread, and to listen to those voices as we continue to move forward in truth.

Thank you, Machane2000, for bringing me into being.

And to this land, for holding it all.

PS. If you were a Machane 2000 attendee, email me! It would be so fun to get a Facebook or whatsapp group going. I love you all.

About the Author
Rishe Groner is the creator of The Gene-Sis, a post-Hasidic movement toward embodied experience and personal growth through Jewish mystical texts. Groner is a writer, strategist, marketer and teacher, and her work has appeared on Alma, JTA, Lilith, Tablet, The Wisdom Daily and on www.thegene-sis.com. Subscribe to Rishe's daily meditations and "Soulhacks" for Sefirat Ha'Omer here http://eepurl.com/bYVcdT
Related Topics
Related Posts
Comments