A gathering for members of the National Women’s Council, established by Mahapach- Taghir, which brings together leading Jewish and Palestinian activists from communities around the country. Givat Haviva- Fall, 2019. (courtesy)

My weekly five a.m. drive to Hebrew University was more spirited than usual last week – as I had a visitor in tow. My mom had just arrived from the US and per usual, she wanted to sit in on my class. (And yes, when you move far away from home and your mom comes to visit, you basically agree to everything.) Our plan was to spend the morning with my students, who are becoming certified in ‘how to make the world a better place’, and then meet other inspiring university students volunteering at an after-school learning center in a nearby Jerusalem neighborhood.

When we arrived at the center, set up by the nonprofit Mahapach-Taghir, the neighborhood kids were discussing questionnaires they had developed with their parents to get feedback on potential after-school programs. These young children were learning the first steps of community organizing, which always starts by asking questions. And this model is exactly what Mahapach-Taghir (‘revolution’ in Hebrew and ‘change’ in Arabic) has done for over twenty years. A shared Palestinian- Jewish NGO, it is run by co-directors­ – Fida Tabony Nara, a well-known activist in both feminist work and shared society circles, and Nurit Barak, who herself started tutoring as a university student over a decade ago.

Captivated by our visit with these kids (and especially partial to the teaching of research skills at such a young age), I decided on the spot to give Fida and Nurit new job titles, labeling them ‘Co-Chief Inspiration Officers.’ Along with everyone on their team at Mahapach-Taghir, they are in the business of inspiring – of creating momentum and change based on a partnership with local communities, university students, parents and kids. 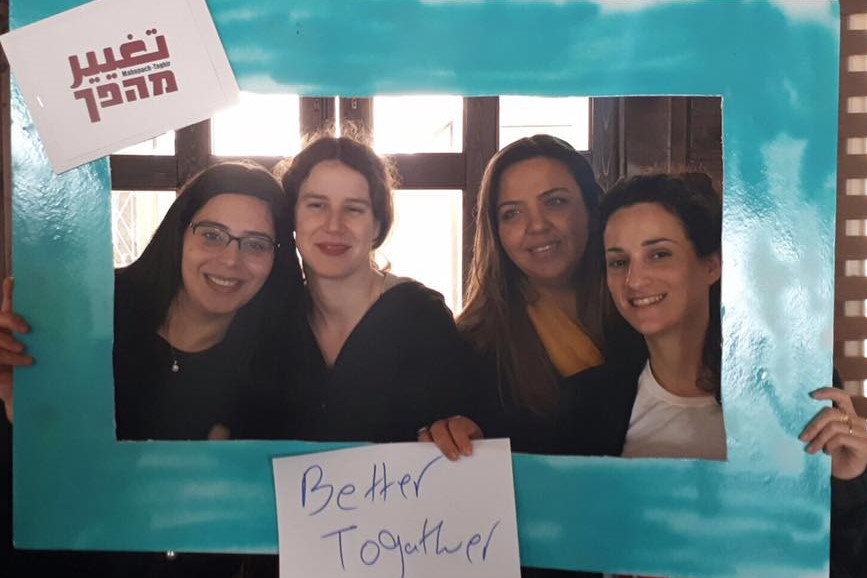 From right, Nurit Barak and Fida Tabony Nara, together with Sigal Yonah, and Raghda Awad, featured in their media campaign ‘Better Together’ – promoting Palestinian and Jewish partnership as part of building a better future. Fall, 2018

From public parks in Katamonim and neighborhood clean ups in Florentine, to bringing public transportation to a neglected neighborhood in Yafia and addressing the proliferation of weapons in Maghar, they have been helping to turn kids and parents into advocates driving change for their communities. 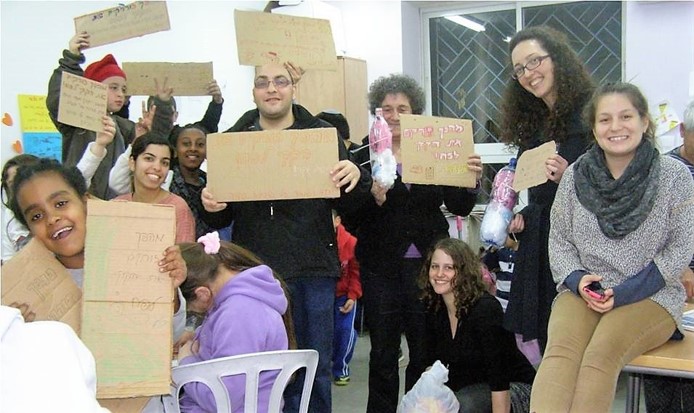 Activists, both children and their parents from Kiryat Yovel in Jerusalem working with university students to raise awareness in the local community about maintaining neighborhood cleanliness and infrastructure. Fall, 2013.

Mahapach-Taghir started back in the late 1990’s when a group of Hebrew University students, fresh off a successful campaign against a rise in tuition, decided to take their newly minted community organizing skills out to local neighborhoods. With dreams of social justice, the students met with residents in the neighborhood of Katamonim to see how they could help be a catalyst for change. It began with questions – what do they want for their communities? Their families? Themselves?

National annual conference for university students who are working as tutors and engaging with the local communities at the Mahapach- Taghir learning centers. Spring, 2019.

Sparking the process by first asking questions, the university students found that the residents wanted to provide extra educational support for their children after school. The students agreed to create an afterschool learning center as requested, but the caveat was that in lieu of any payment, parents would have to sign up too. The parents were signing up for a partnership with the students to figure out together what they could do to improve the quality of life in the neighborhood.

It would be Community Organizing 101 for everyone involved. And in Israel at the time, still transitioning from decades as a social welfare state, none of this was a given. And certainly not in marginalized communities. 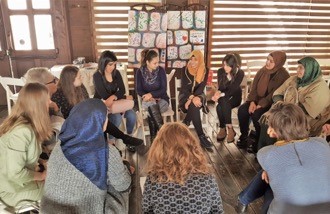 A series of seminars in Nazareth with activists, alumni and students of Mahapach- Taghir on topics related to nurturing local activism, engaging with residents and building networks. Winter, 2018.

With a manifesto in hand, Mahapach-Taghir created a learning center with the community that would become a part of the daily life of the neighborhood of Katamonim. Over time, Mahapach-Taghir would continue to sneak inspiration into unlikely places, establishing more neighborhood learning centers and building communities of change makers among traditionally disenfranchised populations.

And since most of the residents who became engaged with them were mothers, the focus of their work in cultivating activism took a decidedly feminist turn, with an emphasis on women’s empowerment. A fight song for each mini- revolution took on a different shape over the years. 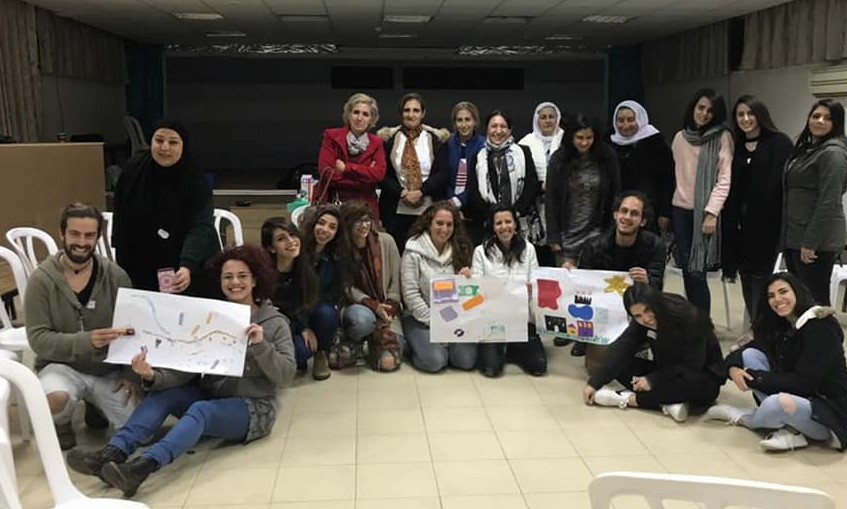 Gathering of university students and community leaders to study examples of activism in neighboring Jewish and Arab communities, and how to address challenges of living in the geographic and economic periphery. Kiryat Shemona – Fall, 2018.

An example of such renegade behavior? In 2009, a group of moms involved with Mahapach-Taghir in Kiryat Yovel began imagining new possibilities for themselves. Watching their own kids respond to learning opportunities at the afterschool center had helped inspire them to be more ambitious. Maybe even they, mothers over the age of forty, could go out and subvert the norms and challenge traditional expectations of what they could achieve in life.

Following a series of negotiations between the David Yellin Academic College of Education and the Jerusalem Municipality, the mothers went back to school to get their BA’s. They did it as a group, having one concentrated day of study each week with the Mahapach-Taghir students helping with childcare and extra academic support and the municipality providing scholarships. It was a team effort which is always useful when you are going to buck convention.

Graduation ceremony for a B.A. degree of participants in Mahapach-Taghir’s ‘ Second Opportunity’ program in Jerusalem, with twenty -nine out of the original thirty women completing their degrees. Spring, 2014.

A few years later, in 2014 at a national gathering of all Mahapach-Taghir centers, Palestinian women from Tamra heard about the project of higher education in Kiryat Yovel, and dreamed of this for themselves. Oh, and perhaps I should note that this is not standard operating procedure. Traditional Mizrachi Jewish women from Kiryat Yovel don’t run in the same social circles as traditional Muslim women from Tamra. It takes organizations like Mahapach-Taghir to throw out the outdated playbook on this one, breaking the norms. And often, once the women at these shared forums compare notes, they see how much they have the same aspirations and struggles – as well as the same capabilities – to bring about significant change. 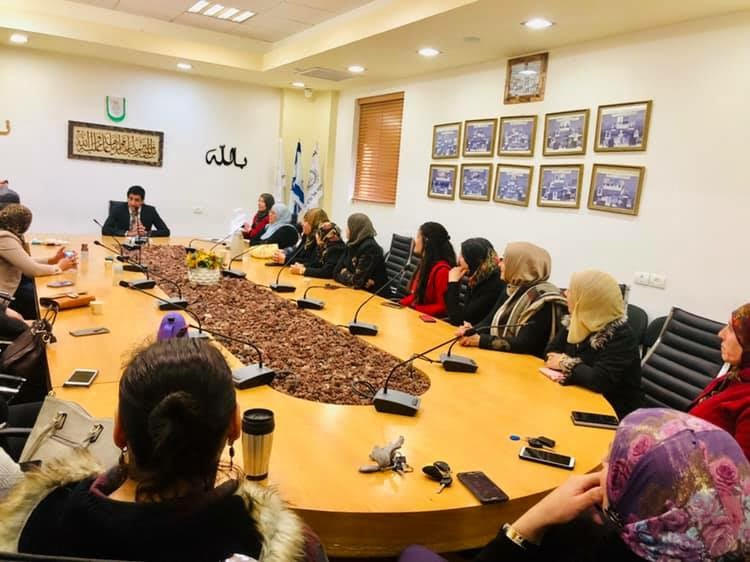 Discussion held on the partnership among the Mahapach -Taghir activists with the local municipality of Baqa al-Gharbiyeh and the Givat Haviva campus of the Open University. A group of over forty women are beginning a BA program, and in coordination with the Municipal Advisor on Women’s Affairs, Baka Muassi, the city will fund 50% of all scholarships. Spring, 2018.

Fast forward a few more years. Now well-established in Tamra, Mahapach-Taghir’s higher education program has spread to other communities, often with municipal-funded scholarships and institutional partnerships like with the Open University. What was once viewed as radical becomes mainstream; what was once revolutionary becomes an expectation. 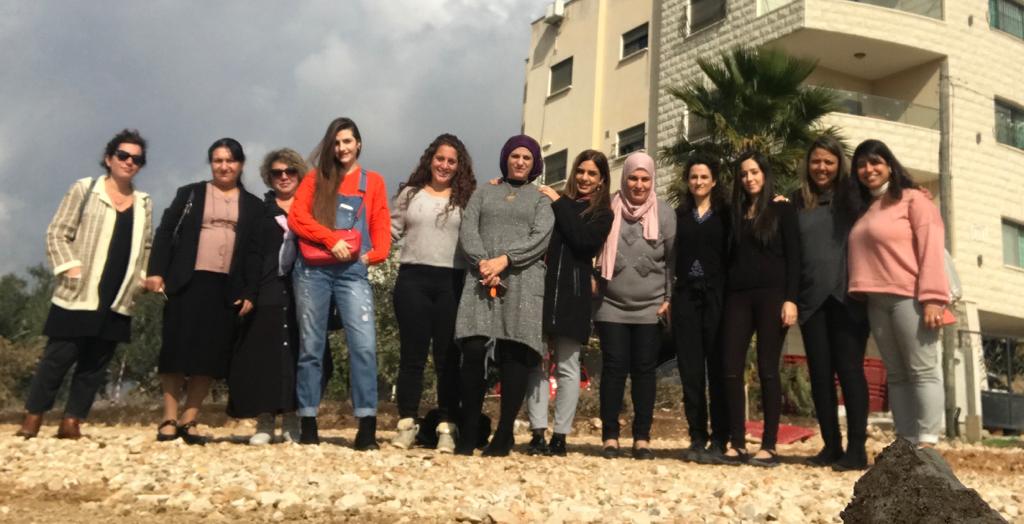 A visit by members of Mahapach- Taghir’s team, together with the nonprofit Tag Meir, in solidarity with the community of Yafia, after a series of racist attacks. Fall, 2018.

Filled with all of these stories from Fida and Nurit and everyone else that we met through Mahapach-Taghir, my mom and I finally headed home. Sustained by lots of inspiration and coffee, I was happy to have my own Chief Inspiration Officer in the car with me. We talked about all the moms at Mahapach-Taghir who are CIOs for their own kids, and how great it is to have such a team effort for taking on rebel causes.

You too should consider heading to one of Mahapach-Taghir’s centers, to meet with the kids, students, staff or parents. You might find yourself dreaming up your own seemingly radical ideas, perhaps even thinking up lyrics to your own fight song.