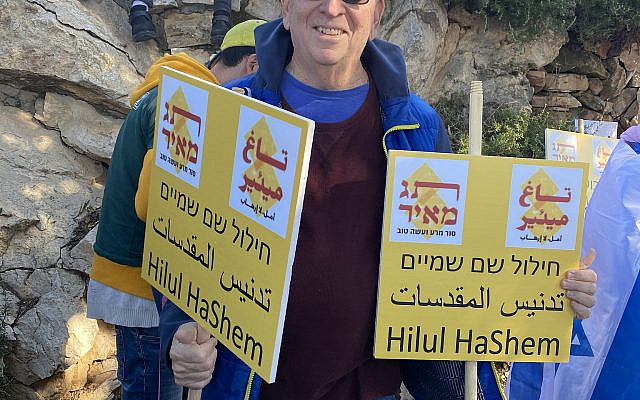 2022, December 29, Ron Kronish at demonstration against the new government in Israel with Tag Meir poster. courtesy of Ron Kronish

During the last ten days, I have already participated in two protest demonstrations in light of the rise of neo-fascism in Israel. The first one took place on Thursday, December 29, 2022, opposite the Knesset (Israel’s parliament), with thousands of other people who were protesting the installation of the most extreme right-wing anti-democratic government in the history of Israel. At this demonstration, I was holding a sign given to me by Forum Tag Meir which had the transliteration of the Hebrew words chillul hashem, which means “blasphemy” on it (see my photo with this sign above).

A week later, I participated in a solidarity visit organized by Forum Tag Meir, to the Protestant cemetery on Mt. Zion, where 30 Christian gravestones had been desecrated the day before. At the visit, attended by about 50 people—mostly Jewish, but also including some Christians and Muslims—several of the people who spoke used the same words chillul hashem. Why? And how are these incidents connected?

What is meant by the concept of Chillul Hashem in Judaism?

Chillul Hashem is a Jewish concept which implies that someone has taken the name of God in vain. For example, if a Jew acts immorally in an intentional way, or uses the name of God in an inappropriate way, especially in the presence of other people, Jews or non-Jews. In other words, when a Jew acts in a shameful manner—embarrassing both other Jews and Judaism, he or she has desecrated the name of God.

The new coalition government of Israel, which took power just a little more than a week ago, is without doubt a  giant chillul hashem. Its leader and many of its partners desecrate the name of God daily by their statements and their actions. Moreover, the ruling coalition has within it a political party within which is unfortunately called “Religious Zionism”, thus causing many people in Israel and around the world to have the mistaken notion that they represent the Jewish religion or the religious stand of modern Zionism. Nothing could be farther from the truth.  They do not represent my Judaism, nor the Judaism of most of the Jews in Israel or in the Diaspora. They don’t even represent the views of most Modern Orthodox Jews in Israel or the world.  Rather, they are a mutation of Judaism that has sprung in recent times, just like extremist forms of Judaism arose (and then disappeared) in our history.

This so-called “religious” party should be called “Blasphemous Zionism’, since their ideas of religion, especially the Jewish religion, are severely distorted. The leaders of the three “religious” parties that make up this mini-coalition of extremist political parties (which have split into three separate parties again after the election) —have repeatedly expressed views that desecrate one of the main principles of monotheistic religions, namely that all human beings are created in the Image of God (did they forget that we just read this in Genesis only a few weeks ago?). They are anti-Arab, anti-Muslim anti-LGBTQ, anti-women, anti-leftists and liberals, i.e., anti-everyone except themselves. They incite to fear and hatred all the time, by rabble rousing and by engaging in provocative actions, like unnecessarily going up to demonstratively walk on the Temple Mount, just to annoy the Muslim world, the Palestinians, the international community and people of peace everywhere.

At the visit to the Protestant cemetery on Mount Zion last Thursday, most of the people who saw what I saw—the vandalization of Christian graves—were in a state of shock, as I was. “Why?” we kept asking ourselves. Why would someone do this? What has this got to do with the Israeli-Palestinian Conflict? What is wrong with these people? 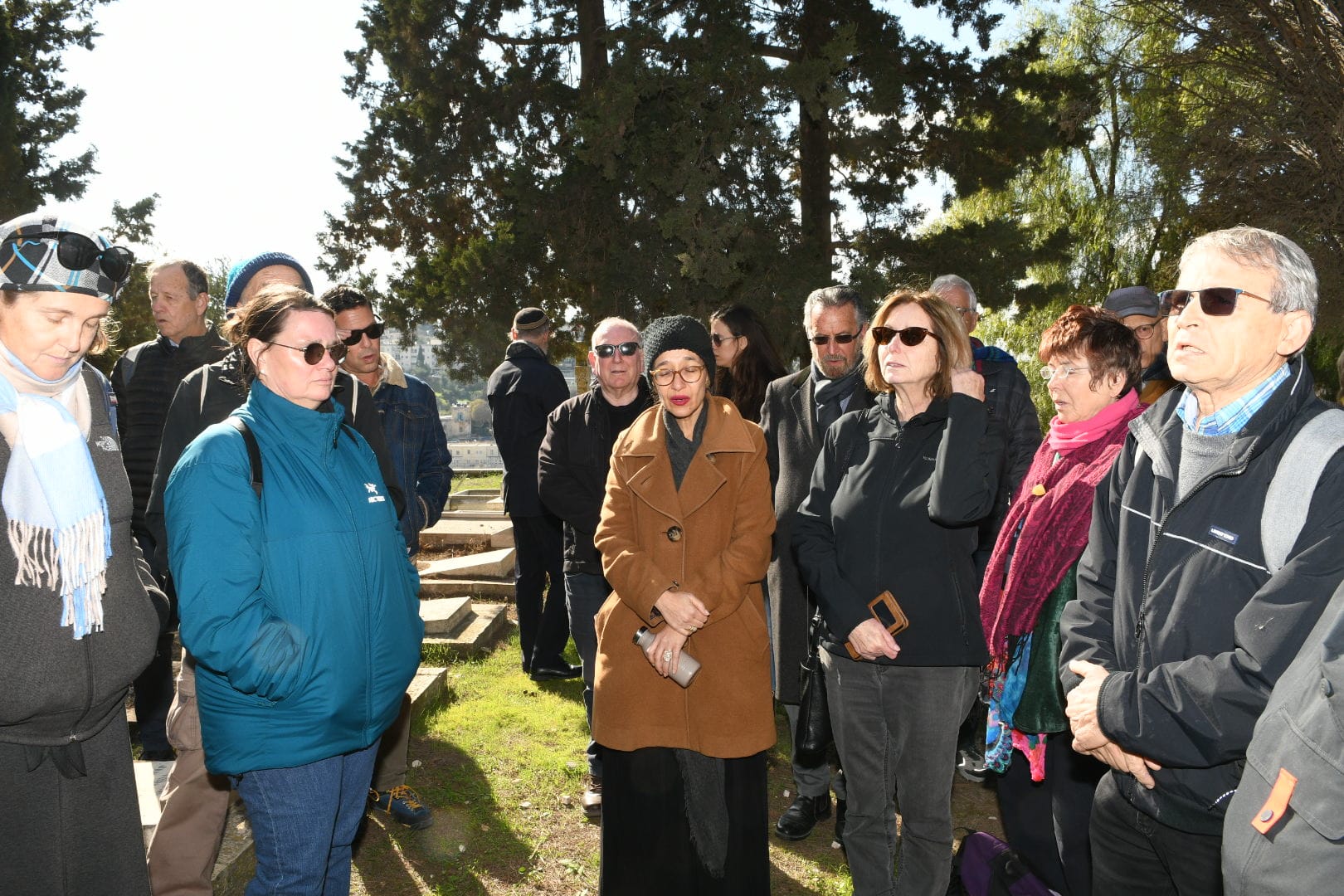 [Photo courtesy of Tag Meir Forum, photographer: Rafi Kotz.]
I am sorry to say that I and my colleagues in the Tag Meir Forum have visited Christian institutions in Jerusalem and other parts of Israel, which have been vandalized by ultra-orthodox young people too many times during the past 11 years. It is always embarrassing and we always feel a great sense of shame that Jews could actually do such things. Don’t they remember how many Jewish graves were vandalized and destroyed in Europe? Don’t they have any knowledge of true Torah values—of treating the stranger in your midst fairly, of loving your neighbor as yourself?

Who are these Jews who commit these acts? Where do they get educated? Who are their rabbis?

While we don’t yet know the specifics on the people who have committed this last spate of crimes, we do know  from video phootage that they were wearing certain Jewish religious garments (tzitziot) which identified them as observant Jews. Also, we do know the general profile of the Jews that have been doing these crimes for many years, based on their views of “religious Zionism” or more correctly anti-religious anarchism. They are called in the media in Israel “the Hilltop Youth”. They have been “educated” in some of the most rabidly anti-other (other Jews, other religions, women, gay people, etc.) yeshivahs in the West Bank and in parts of Jerusalem.  Some of their rabbis have written racist tracts and articles which are well known in extremist circles and beyond them. While they may be a small minority, they are very vocal and very active and have the support of many in their communities and in the communities associated with them. And sometimes, their acts of vandalism have led to Palestinian families being burnt alive and to others being killed!

And who has defended these Jewish terrorists over many years? None other than Advocate Itamar Ben Gvir, who served as their lawyer very often, and now is the Minister for National Security in Israel!

Video-cameras have caught the culprits of this crime and two people have already been arrested. But will they be indicted? And will they be brought to trial? The record of the last decade in Israel is very poor on this question. Very few of the perpetrators of these acts have actually been brought to justice.

After the solidarity visit on Mount Zion last Thursday, the chairperson of the Tag Meir Forum, Dr. Gadi Gvaryahu, said:

This was one of the most emotional and meaningful of our solidarity visits in recent years. We felt deeply ashamed when we saw in-person the sights of these desecrated graves. At the end of the visit, we closed with a special song:

‘Who is the person who seeks life? One who leaves his evil path and does good deeds, one who seeks peace and pursues it.’

We need more people in Israel who will seek another path than that of this evil government which is constantly desecrating God’s name, destroying our democracy and discombobulating the international community with its immoral acts. We need people who will bring light, to combat the darkness that we are facing, people who will seek peace with all their strength and pursue it persistently, without giving up, despite the difficult challenges and obstacles.