The coronavirus crisis is heating up the new cold war between US and China.

During a White House press briefing on Tuesday, President Trump called Covid-19 the “Chinese virus” and was reprimanded by a few journalists for its racial overtones, citing increasing reports of discrimination and abuse against Asian Americans.

As the world is reeling from a global pandemic, instead of using this as common ground to forge cooperation for the betterment of humanity, it seems Beijing and Washington are playing the blaming game and ratcheting up tensions in an already strained relationship.

From Beijing’s perspective, the grounds for its conspiracy theory are found in a February 29 Global Research article and a few others, which highlighted several incidents that suggest the virus may be an act of bio-warfare.

One event is the Military World Games that took place in Wuhan between October 18-27, 2019, where a delegation of over 300 U.S. soldiers participated along with other soldiers from over 100 nations. Two weeks later the first Covid-19 case was discovered in Wuhan. Conspiracy theorists draw links between U.S. soldiers at the Wuhan military game to the sudden closure of U.S. Army’s biodefense lab at Fort Detrick, due to safety lapse back in August 2019.

Another event occurred on the same day that the Wuhan military game opened. On October 18, the Johns Hopkins Center for Health Security convened a coronavirus pandemic tabletop exercise called “Event 201” in New York.  By coincidence the scenario simulates an outbreak of a novel zoonotic coronavirus transmitted from bats to pigs to people, and eventually becomes transmissible from person to person which led to a severe pandemic.

Sponsored by the Bill and Melinda Gates Foundation, the World Economic Forum, with players including current and former officials from the CIA, World Bank, IMF, pharmaceutical and public relations firms, the eerie timing of a coronavirus simulation a few weeks before the outbreak in Wuhan not only provoked conspiracy theories from the Chinese, but also others suspicious of big pharma-U.S. government collusion.

Moreover, it did not help that a coronavirus plush toy was used as an image to promote the event and given away as a souvenir, seemingly making light of a deadly virus and prompting comments from twitter and facebook of big pharma conspiracy. 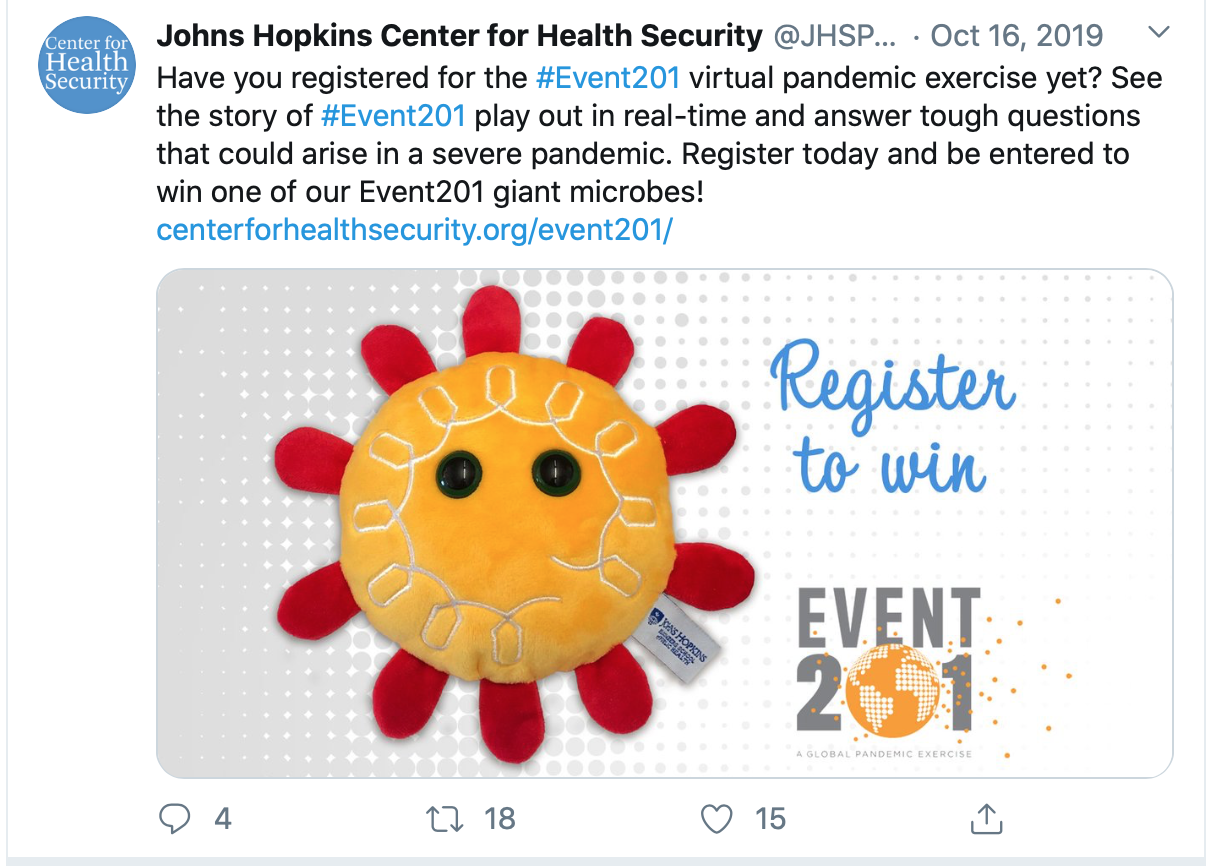 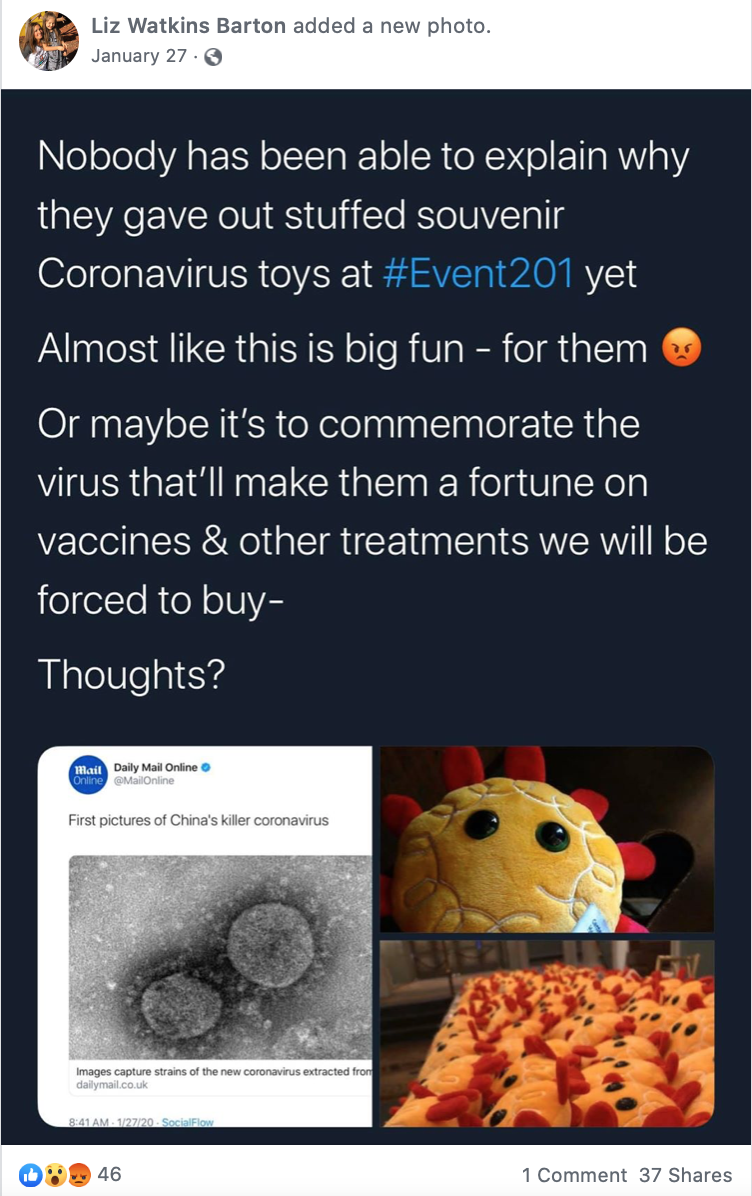 From Washington’s perspective, the conspiracy began from a January 26 Washington Times article  that the virus’ outbreak could be linked to Wuhan Institute of Virology.  It cited an Israeli intelligence officer Dany Shoam for this claim, which was later picked up by other sites and promoted by U.S. government officials such as Senator Tom Cotton and some members of the Committee on the Present Danger: China (CPDC).

It is the sort of tale that resonates with China hawks in Washington, while others such as Sen. John Cornyn (R-Texas) expressed disdain for Chinese people and culture, saying a “culture where people eat bats and snakes and dogs and things like that” are to blame for the coronavirus.”

‘These viruses are transmitted from the animal to the people and that’s why China has been the source of a lot of these viruses like SARS, like MERS, the Swine flu, and now the coronavirus, so I think they have a fundamental problem,” Cornyn said to reporters, and that he did not object to a geographic name for the virus. Though, he seemed unaware that MERS (Middle East Respiratory Syndrome) originated in Saudi Arabia and the Swine flu (H1N1) in the U.S. in 2009.

Other members of Congress piled on and are now demanding that China pay reparation to the U.S.  Rep. Jim Banks (R-Ind.) suggested “the president could force China to relieve a great deal of American debt” given China holds $1.1 trillion in U.S. treasury bonds, or “he could institute tariffs on China and designate the funds into a coronavirus victim relief fund” for Americans.  Back in 2009 there were no mention of reparations from foreign countries when the U.S. swine flu infected over 60 million Americans and then spread globally with death tolls over 570,000, but if Trump does seek reparation this could set an interesting precedent for future pandemic outbreaks.

At this critical window, U.S. and Chinese leaders would be wise to redeem the time and exercise joint leadership to address the pandemic rather than trading barbs and pointing fingers.  Because another imminent threat worse than the Chinese virus is brewing in Los Angeles—the American plague of Black Death.

Since the early 2019 typhus outbreak in Los Angeles, public health officials have been sounding the alarm about the rise of medieval diseases in homeless encampments with unsheltered population numbering more than 30,000. This vulnerable population is at risk of being incubators of not just the coronavirus, but also typhus, typhoid fever, tuberculosis, and the bubonic plague.

The plague is already found on fleas in the out-of-control rat population in downtown LA, which thrives on the trash, food and human excrement littering the sidewalks, and in 2018 a United Nations rapporteur actually produced a damning report of the deplorable conditions of the homeless encampments. Subsequently doctors have repeatedly issued grave warnings that the entire California population may be at risk if the problem is not mitigated, but to no avail.

In light of this emergency, and while it may be politically expedient to scapegoat one another during election year, now is not the right time when so much global public health and lives are at stake. Both U.S. and China need to set aside their pride and come together to not just solve the current Chinese virus, but more importantly set conditions to prevent the emerging American plague looming over the horizon.

About the Author
Dr. Christina Lin is a California-based academic and consultant specializing in China-Middle East relations. She has extensive US government experience working on national security and economic policy planning, including at DoD, State, and NSC where she also managed CFIUS cases.
Related Topics
Related Posts
Comments