The Blogs
Ari Afilalo
Apply for a Blog
Advertisement
Please note that the posts on The Blogs are contributed by third parties. The opinions, facts and any media content in them are presented solely by the authors, and neither The Times of Israel nor its partners assume any responsibility for them. Please contact us in case of abuse. In case of abuse,
Report this post. 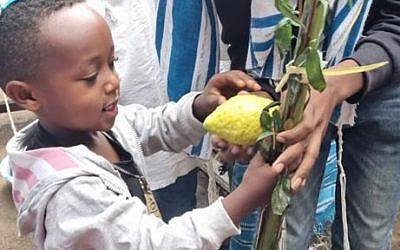 Ethiopian Jews with Lulav and Etrog, Courtesy of Struggle to Save Ethiopian Jewry Association 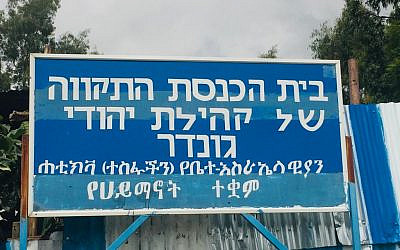 Hatikva Synagogue of Gondar, Courtesy of Struggle to Save Ethiopian Jewry Association

The Israeli government’s decision today to allow only 3,000 Ethiopian Jews to make Alyah as part of a limited family reunification program, while leaving more than 11,000 of their brothers and sisters to face hunger, a raging civil war, and a disintegrating country,  is another disappointing breach of the Law of Return.

While we must celebrate the 3,000 who may be able to leave under today’s decision and its budgetary allocation, that number falls short of prior commitments made by the Israeli government.

Compounding the abandonment of 11,000 Jews, the Israeli government’s action contemplates that the synagogues, Mikvahs, and schools that have served the Jews of Ethiopia will essentially shut down after those protected by today’s decision arrive.  This will eradicate the meager institutional support and lifeline to Jewish practice for those left behind.

One cannot help wonder if the current events reflect (again) a decades-long, discriminatory Alyah policy that denies the return to Zion to Jews of color.

Sadly, for Moroccan Jews like me, the evidence that prejudice, conscious or not, taints the government’s action is reminiscent of the historical Sephardic immigrant experience in the early days of the State of Israel.  I was born into the side of the family that left Morocco for France. The first generations of North African Jewish immigrants found in that country a terre d’accueil, a land of refuge, rife with opportunities for business, education, and social mobility.  We produced doctors, lawyers, psychologists, public intellectuals, tycoons, and politicians, all the while maintaining our Judaism in the face of anti-Semitism.

On the other hand, my relatives, and hundreds of thousands of Moroccans who pursued the Zionist dream in Israel, were relegated to tent cities (ma’abarot).  While it is undeniable that the nascent State struggled to overcome extreme economic, security, and societal challenges, it also remains a fact that Sephardic Jews have suffered before, during and for years after the Ma’abarot age, discrimination in employment, education, and social acceptance. Ben Gurion himself worried about the “Levantinization” of the country; one cannot help wonder whether the same sentiment is fueling Israel’s decision to close its door to so many Ethiopian Jews.

Why else would the Israeli government express no serious concern that, three decades after the massive emigration from the former Soviet Union, over 50% of those immigrants are still not Halakhically Jewish, all the while allowing the Jewishness of a 11,000 Ethiopians to be constantly called into question?

Why do Halakhic doubts serve as the basis for a policy of exclusion when, dating back to the State of Israel’s first chief rabbi, and grandfather of Israel’s current President Isaac Herzog, Rabbi Yitzhak Halevi Herzog, religious authorities across the spectrum have affirmed the Jewish identity of Ethiopian Jews, their suffering, and their link to our history?

Why would the Israeli government tolerate the shutdown of Jewish institutions in Ethiopia, if its motive was not to deny plausibly that it is leaving an entire community behind?

Why does the government insist on the false claim that, when it brings refugees from camps in Ethiopia, the camps fill up again? As Joseph Feit, the Chairman of Struggle to Save Ethiopian Jewry and the recipient of awards from the Knesset, the Jewish Agency and other mainstays of Jewish life, explained, the camps are full because thousands of children have been born to the thousands left behind, their relatives in Israel will not give up on them, and the Israeli government has been stingy in its visa policy.  See Ethiopian Jewry:  Will Israel Repeat Its Mistakes, https://www.jpost.com/opinion/ethiopian-jewry-will-israel-repeat-mistakes-685539. 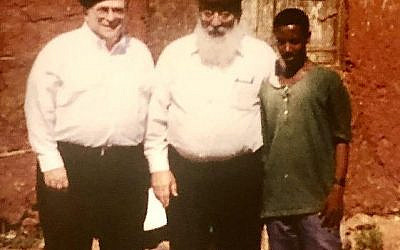 Joseph Feit and Rabbi Amat in Ethiopia, Courtesy of Struggle to Save Ethiopian Jewry Association 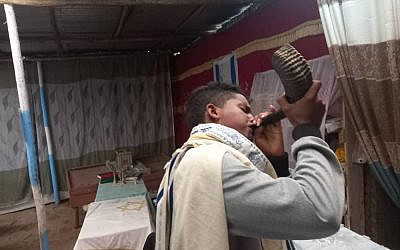 Blowing the Shofar in Ethiopia; Courtesy of Struggle to Save Ethiopian Jewry Association

And is it even moral to count Jews and complain that more will arrive?  Would the government make the same claims if we were dealing with camps for displaced persons from, say, Australia or Venezuela?  Israel has, to be sure, airlifted and brought in many Ethiopian Jews, but the Law of Return says that all Jews can come home — not just those who make limited evacuation flights.

We just read Parshat Vayeshev, and marveled at Yosef’s ability to maintain his connection to his people in Exile, all alone.  The Ethiopian Jews have done so through thousands of years of exile in another African land, and we should honor that incredible history instead of invalidating it.

But another message of the Parsha is even more pertinent.  When Yosef started to feel more comfortable in his land, Rashi tells us, he began to relax, eat and drink with his peers, and Hashem reprimanded him for forgetting his parents, brothers and sisters:  “You sit here partying while your father mourns you,” Rashi’s inimitable words relay, “I will now sic a bear on you.”

That bear, Potiphar’s wife, lands Yosef in jail and causes him untold suffering.  G-d, and History, will not forgive us for the discriminatory forsaking our brothers and sisters in Exile. 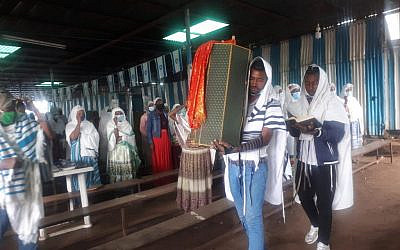 Carrying Torah during Services in Ethiopian Synagogue, Courtesy of Struggle to Save Ethiopian Jewry Association.

The Rambam says that we make true Teshuva when, faced with the same situation, we act differently.  Let’s not repeat the botched welcome of North African Jews.  We are a people that shakes heaven and earth to return soldiers, those unjustly imprisoned, and even a stray traveler arrested in a foreign land with marijuana.

Tonight we start celebrating Hanukkah.  Before you eat that doughnut or spin that dreidel, before you open those presents, please do something to save our brothers and sisters in dire straits.  Make that call, send that email, talk to that friend in a position of influence, and tell them that we must bring them home.  Let’s choose the camp of sisterhood and brotherhood, unity and decency.

About the Author
Ari Afilalo (afilalo@camden.rutgers.edu) is a professor of law at Rutgers Law School in New Jersey. He grew up in France, the son of a Jewish Moroccan family, in an ethnically mixed working class neighborhood. He has published extensively in the field of international law. He is the current president of the West Side Sephardic Synagogue in Manhattan.
Related Topics
Related Posts
Comments