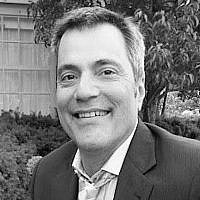 The Blogs
Ron Gold
Why Not You?
Apply for a Blog
Advertisement
Please note that the posts on The Blogs are contributed by third parties. The opinions, facts and any media content in them are presented solely by the authors, and neither The Times of Israel nor its partners assume any responsibility for them. Please contact us in case of abuse. In case of abuse,
Report this post. 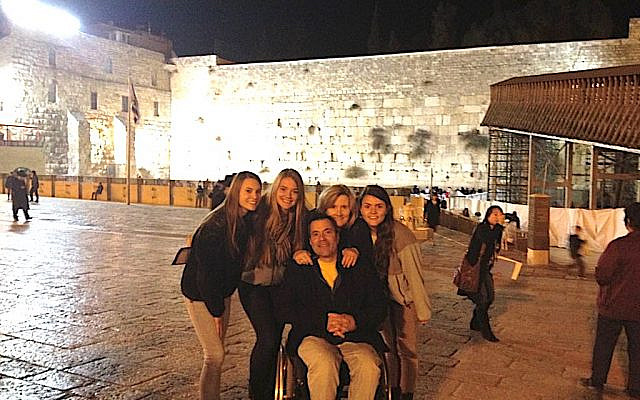 On Thanksgiving this past year, I “celebrated” the 10th anniversary of a near-death accident that left me a paraplegic with a spinal cord injury, who instantly had to reassess my life values and priorities. Ten years later, I’m still at it.

After a traumatic event, one’s religious path often veers toward one of the two extremes – to become orthodox or just forsake God. Oddly, I’ve done neither. I was raised in a Jewish, Zionist family – there was little daylight between the two. This stems from my mom’s upbringing in the Zionist youth movement Hashomer Hatzair in her native Lithuania. She was lucky enough to flee Europe just two years before World War II, but her friends and relatives in Hashomer perished along with many other family members. That survivor’s guilt always hovered as the backdrop of our family’s Jewish affiliation, but faith and prayer guiding my daily life? It didn’t then and doesn’t now.

I recently wrote a blog for this tenth anniversary and cited three aphorisms I choose to live by as a paraplegic. It strikes me that those maxims that help me push on with a crushed spine are also inherently Jewish:

Why not me? Why not you?

In that essay, I flipped around my initial, instinctive “Why me?” self-pity to help energize me and others. No excuses and no passes for any of us. Certainly, I was reformulating the well-known “If not now, when?” Hillel quote I heard frequently in our home to also include the continuation “If I am only for myself, what am I?”

We can’t change the hand we’re dealt, but we can play our best possible hand.

I have met many in the disability community who believe their injuries happened for a reason. That conclusion gives them purpose. I’ve also found purpose in showing others how to cope and deal with adversity. But was that mission preordained by Hashem? Of that, I’m dubious. I hope He/She has more important things to worry about. I believe the essence of Judaism is how we live our faith and how we act, rather than believing God is micro-managing each of our actions.

That point is made explicit in Hebrew, which bases its word for leadership, “manhigut”, on the root of the word “behavior” or “hitnahagut”. And that’s exactly what I learned as a teen in the Young Judaea Zionist youth movement. Setting an example for others, l’shamash dugma, or being a dugma ishit, was our key tenet for teaching leadership and influence.

For me, the parallel goes further.

Those who are Jewish and those who have spinal cord injuries represent a small sliver of the world’s population – between 0.1 and 0.2 percent. Both groups are immersed in a seemingly inexorable struggle for acceptance of who we are while confronting the adversity that comes along with the struggle. We’re both notable and at times extraordinary. But as far as either one being chosen for this lot, I’m not so sure.

Blind mountaineer Erik Weihenmayer, believes adversity is one of the most potent forces in life. It shapes our character, clarifies our priorities, defines our path, and fuels our greatness. Considering that he climbed the Seven Summits and kayaked the Colorado River, he may be on to something.

The motivational speaker, Professor Brene Brown, speaks about the courage to be authentic and vulnerable – putting oneself in the arena and fighting when the outcome is uncertain and unknowable. She speaks dismissively of those “in the cheap seats without being in the fight,” and maintains we should never let criticism and vitriol keep us from being who we are. It is in my vulnerability and my fight for authenticity where my two identities align.

Covid has many feeling the stress and strain of being “immobilized.” By contrast, throughout this pandemic and during the eight years before it started, I continue to be amazed how others with disabilities adapt and achieve with grace. They do so in the professions, in business, in sports as well as with friends and family. Likewise, as Jews, we’ve absorbed antisemitic attacks during Covid, as we always do in times of stress, but I’ve been heartened by our ability to connect and support each other while remaining resolute.

Some of the hardest, and dare I say most courageous, things I’ve done have been to put myself out there as a paraplegic. After my accident and dozens of operations and procedures, re-engaging on a social level with friends was hard enough, but doing so on a professional level was terrifying. Before that drowsy driver hit my bicycle head-on in broad daylight without braking, I was a managing director on Wall Street. I was running a sales desk, covering clients around the country, and flying to Asia quarterly. Yet the first few times I entered a meeting in a wheelchair with a roomful of strangers petrified me. I realize now that I was finally processing the new me, and that was mortifying.

I can now attest to the fact that after doing so numerous times, I am stronger and more resilient for it. Weihenmeyer was onto something. If I can carry on day by day as a paraplegic, and if we as a people can endure through the toxic vitriol, then maybe, just maybe, we have the toughness to deflect almost anything else.

About the Author
Ron Gold's 25+ year career on Wall Street ended in an instant when he was hit by a drowsy driver while bicycling ten years ago. He survived dozens of life-saving surgeries and awoke weeks later from an induced coma as a paraplegic. Ron and his wife, Betsy, became frustrated with their home care options and started LeanOnWe to help families find better, safer and more affordable home care. Today he enjoys sharing his post-traumatic insights and life lessons for when adversity strikes, change paralyzes or new thinking is needed.
Related Topics
Related Posts
Comments