The Blogs
Don Davis
Apply for a Blog
Please note that the posts on The Blogs are contributed by third parties. The opinions, facts and any media content in them are presented solely by the authors, and neither The Times of Israel nor its partners assume any responsibility for them. Please contact us in case of abuse. In case of abuse,
Report this post. 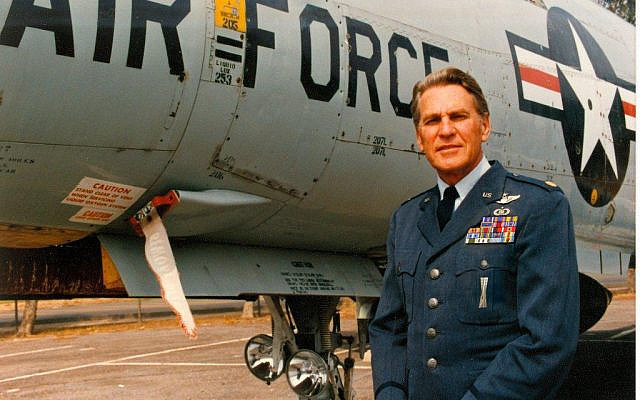 US Air Force Officer, Senior Pilot, Cecil Davis, beside an F-101 Voodoo at March Air Force Base, California, at full retirement and commencement of pension, 1984, updated.

In a break from my normal analytic material about Israel and the Middle East, I’m going to report on something personal. Not too long ago, my dad, Cecil Davis, passed away and is with the Lord, and after 70 years of marriage to my mom, is now once again joined with her – in spirit.

My dad, Cecil, a Permanent Israeli Resident, and a strong public supporter and defender of Jewish Israeli rights and the State of Israel, was an evangelical Christian that made Aliyah with my mom, Colleen, in 1995.

However, though my dad is Christian, and lived in Israel, he did not ‘preach’ to Jews. His goal was to solely support Israel, and to convince gentiles, including Christians, to support Israel and the Jewish people.

Cecil was born in 1924 at Murray, Utah, and moved to a farm in California. Dad’s lifestyle was fashioned young, his mom died when he was ten. He left home at sixteen and supported himself working for a Mexican-American family, was neighbors with a Native American Indian, and his best friend since a teenager was Jewish. Besides being in the US Army together.

Lenny Goldberg treated dad like a brother, not only as a best friend, but a friend for life. Until Lenny’s passing in the 1960s, Lenny introduced dad to a world of family love, that he, dad, had not experienced until he, dad, met my future mom.

As directly quoted from experienced news, historical and column writer, Dave Kiffer, who had also interviewed my dad in 2014, for the SitNews in Ketchikan, Alaska, and after my dad passed away most recently wrote in the newspaper, the Ketchikan Daily News: Cecil Davis was the primary pilot.

In the military, and early years, my dad was known as ‘Dave’, and referred to as ‘Dave’, not Cecil.

Then my dad met another Jewish life-long friend, also, to us the entire family. US Air Force Officer and Military Attorney, Robert Oster.

Dad seemed drawn to people of Jewish faith and background, hence, so was our family.

No matter the state, province or country, dad would meet someone Jewish and soon they would be guests in our home, which created genuine, loving, enduring impressions of Jews, and of Israel, in our family. Anyone who knew my parents and me, know positively this is the truth.

Plus, even though I was Christian, I got to experience Judaism, Temples and Synagogues. One, I will never forget, the unique Synagogue in Paramaribo, Suriname, with sand floors. Standing in silence on the sandy floor in the beautiful Synagogue was a remarkable, calming phenomenon.

Then dad was assigned, along with our family, to a Joint Royal Canadian Air Force (RCAF) / USAF Base in Canada. Including flying Search and Rescue with the RCAF while stationed in Canada, and credited for saving four civilians in an aircraft with an onboard fire and crippled landing gear.

Although, he was never awarded for the heroic and selfless action despite being written in an Official USAF document, written and signed by the USAF Operations Officer, read and signed by the Base Commander, and read, underlined and signed by a Division Brigadier General. And regardless of repeated submissions for recognition.

Gallant multiple-lifesaving action indeed, for if my dad would have failed saving the people and the aircraft, he most likely would have been court-martialed for involvement in civilian deaths, civilian ground damage, and on foreign soil.

Later, he was a pilot with Tactical Air Command in a combat crew, group, and squadron, (reconnaissance aircraft) in ‘The Cold War’.

Last, on Command Staff and Head of the Information Office of the 4504th Tactical Missile Training Wing (Nuclear) at Orlando Air Force Base, Florida, overseeing missile launches at Cape Canaveral and Patrick Air Force Base, reporting to Command Staff, and unclassified material to USAF families and the public.

Cecil retired from the Air Force in 1967 after over 24 years.

My dad has at least 20 awards and ribbons, five occupational badges, including RCAF pilot wings, and flew over 2600 military hours with 928 listed as combat hours.

Pilot Cecil Davis flew 21 different US military aircraft and multiple varieties of those aircraft and several Royal Canadian Air Force aircraft. He flew single, twin and multi-engine prop, single and twin jet, and helicopter, around the world off of land, water (floats), snow, and ice near the Arctic Circle.

Also, Cecil was a very, good friend with Israeli Air Force (IAF) B-17 pilot, and later, EL AL Chief Pilot, Reuben Narunsky, and other members of the original IAF 101 Squadron from the late 1940s and early 1950s. Cecil used to participate and attend many 101 Squadron events.

My dad, and our family, were particular, long-time friends with Israeli Air Force legend, Lou Lenart. The first combat flight leader of the Israeli Air Force (IAF) who led the daring raid against the Egyptian Army preparing to attack Tel Aviv in 1948. And still friends with Lou’s delightful wife, Rachel, who worked for nearly four decades for the Israeli Foreign Ministry.

Likewise, Cecil has Israeli Air Force (IAF) pilot wings given to him by the first IAF F-15I Squadron Commander after Cecil’s participation at the earliest presentation of F-15Is (F-15E) to Israel. Furthermore, dad knew IAF generals, officers and pilots.

Prior to military retirement, Cecil resigned his regular military commission in 1961 and while still being in the US Air Force Active Reserve began flying in 1963 with a famous, international, Christian, humanitarian flight group, Mission Aviation Fellowship (MAF).

Astoundingly, Cecil had the rare opportunity to see a real shrunken head, one of the last verified ‘heads’ taken in tribal warfare in Ecuador, South America. The Ecuadorian government, via an American Missionary, secretly requested Cecil to fly the severed, shrunken head to a location in order to return the head to the family, thus averting a nasty clannish war.

In addition, Cecil test-piloted, for extreme short-field landings, an experimental MAF Cessna 185 with a Reversible Prop. A ‘Rake-Brake’ on an MAF Cessna 180, designed to flip down on landing and claw to a stop, and Dual Brakes on each wheel on a Cessna 180. Besides, MK4 River Rover Hovercraft operations evaluation at a Royal Navy Station in England for MAF Hovercraft Operations in Chad, Africa.

Dad flew 32 types of civilian aircraft with single and twin-engine prop, and multi-engine jet, plus helicopter for a total of over 3100 civilian aircraft hours. And was a test pilot, pilot instructor, and a licensed aircraft mechanic.

And profiled in a short biography about Cecil’s military and flight career on the Historical, 39th Bomb Group web site, as 2nd Lt. Cecil Davis.

Throughout Cecil’s later lifetime he devoted himself to the Lord, the study of the Word and in the last twenty plus years a strong defender of Israel.

My dad was respected, admired and has the love, gratitude and esteem from his family and friends, he will be greatly missed.

Cecil’s body was buried in the husband/wife grave plot (where Colleen’s body is buried) in his home town in the Sharon Valley, in the State of Israel, where he lived for the past twenty-four years.

As I, Don, am the only family member left in Israel, and a Christian, I want to express my deep, eternal thanks and gratitude to my dad’s Israeli doctors and nurses, and to my Israeli city’s burial committee and staff. To my wonderful, wonderful, dear neighbors, friends, both Israelis and American who came to the funeral, despite the lock-down, and provided food, sympathy and comfort (and still do), and the funeral video (for overseas relatives). Moreover, to dad’s longtime friends, Robert Muha and Abraham ‘Avi’ Rozenshtein.

And, to Dor-el Oren, who immediately after my dad’s death came over to help me, making vital phone calls and conversing in Hebrew, despite her extremely pressing and busy family and work schedule. Additionally, US Embassy Nurse, and personal friend, Tammy Dolgin (FNP-C), that inclusively helped in preparation, burial, and afterwards my dad’s room gloomy clean-up.

There is no way I could have done what was necessary by myself.

A special thanks to the US DoD and US Forces DATT in Israel, the USAF Attaché in Israel, and USAF Representatives and funeral attendees, Lt. Col. David Manrrique and Lt. Col. Nicholas Unruh, for their uniformed presence at Cecil’s burial, final military salute, and the 13-Folds, American Flag for military service, which now lies in my home next to my dad’s Official USAF portrait.

My dad would have been very appreciative and proud of the attention and recognition he received from Israelis in the Jewish, State of Israel, Israelis abroad, the varied United States establishments and representatives in Israel, overseas, and in USA, the entire MAF worldwide family, and international Christians around the globe he met, knew and served (including from a country he never visited, India).

The comprehensive kindness and compassionate actions made his passing more bearable. Thank you.

About the Author
Don Davis is a published Middle East analyst and book author. For more than twenty years most of his research material was client confidential and behavioral related. But many of his abridged reports on current or Israeli subjects have been posted as articles or blogs in, The Times of Israel, The Christian Messenger, a newspaper/journal/magazine, and in American news online. Don is also the book author of The Children of Santiago, The Theogonic Resurrections and My three and a half hours at PMW.
Related Topics
Related Posts
Comments