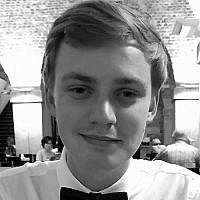 The Blogs
Jonathan Farrell
Apply for a Blog
Please note that the posts on The Blogs are contributed by third parties. The opinions, facts and any media content in them are presented solely by the authors, and neither The Times of Israel nor its partners assume any responsibility for them. Please contact us in case of abuse. In case of abuse,
Report this post.

This statement remains a powerful warning of the continual vigilance we all must have to combat evil that arises in each generation.

And nowhere can this be truer than with the ever evolving phenomenon of Anti-Semitism, one of civilisations oldest prejudices.

With the hundred year anniversary of Balfour this year I often find myself reflecting on my nation’s history and involvement in facilitating the formation of the Jewish state.

I am inspired in the knowledge that there were many Christians within British politics who supported the Jewish people in their endeavour to live in the land of their forefathers in peace and security.

Most inspiring for me is the testimony of Lord Arthur Balfour who, as a Christian, stood courageously in front of the Zionist Federation in proclaiming ‘I am a Zionist’, announcing his intent to join hands with all those in the Jewish community who longed to see the nation of Israel restored.

I too am a Christian Zionist. And with good reason.

Almost every page of the Old Testament is speaking, in one way or another, about the nation of Israel.

Indeed, the Land of Israel is of undeniable centrality to the context of the gospels and the teachings of the New Testament.

Without recognising Israel as the ancient homeland of the Jewish people, Christianity would look very different.

And yet the truth of the Jewish connection to the Land of Israel is subject to attack almost every day on British campus’.

In a matter of months of joining University I had experienced the intense hatred which many Zionist Jewish students were subjected too for simply defending their natural and historical rights as Jews.

I listened as a staff member of the University claimed that Israel had fabricated all the archaeological evidence of Jewish heritage claiming it was all state propagated lie.

At other campus’ students were subjected to verbal and physical abuse by violent anti-Israel activists seeking to prevent an IDF spokesperson from sharing his story. Yet despite this most Christian students have, in my experience, remained silent.

I couldn’t remain silent. So I, alongside other non-Jewish students founded the Exeter University Friends of Israel society and thanks to StandWithUs I was able to make an impact and influence so many Jewish and non Jewish student and raise the pro-Israel voice on campus. That support was crucial in forming and maintaining a strong presence, which attracted more students, which soon became a movement. We felt we had an organisation to rely on.

When Jewish students and their supporters seek even to simply educate about Zionism and Israel on British campus’ they often find themselves subjected to vicious attempts to have their voices silenced and degrade Zionism; the movement that has been instrumental to the survival of the Jewish people in modern times.

Yet such acts of intimidation against the right of the Jewish people to peacefully live in the land they call home is not simply a Jewish issue. These acts serve to redraw the lines of prejudice, entrenching opposition, division and hatred towards one another when all students should work towards the universal goal of building bridges of peace between communities, not tearing them down.

By making a compassionate stand in solidarity with Jewish and Israel societies across the country Christians can help lead the change on University campus’ to demystify the discussion about Israel on campus and stand upon historical truths that our faith could not exist without.

And change is possible.

I’ve met Egyptian students who recall with pride their nations’ peace treaty with Israel since 1979 and are inspired by its example to other nations of what can be achieved through dialogue and reconciliation.

And I’ve even met Palestinians who have wanted to learn Hebrew to be better equipped to build cultural bridges between Israeli’s and Palestinians.

We must not neglect the opportunity student leaders have to direct real, positive change on campus. Change is possible when students are willing to work together, challenge each other and shed their own prejudices in the hope of a more constructive dialogue on the Israel-Palestinian conflict.

Yet I long to see how great the impact might be if only more Christian students would take heed of the biblical and historic call directed to them to stand with the Jewish people as a mark of commitment to their faith of Judaic origin?

I’m committed to making a change. My faith demands it.

And so does our shared duty to justice.

I encourage all students who are interested in educating about Israel and making an impace on campus, to join us at the StandWithUs student conference on the 8th of September. I’m also looking forward to working with all student, Jewish and non-Jewish, and make their campus period something to remember.

Jewish News has a dedicated student section, with the Union of Jewish Students! If you have news, opinion or anything you want to share, then make sure you GET IN TOUCH: Jackm@thejngroup.com

About the Author
Jonathan Farrell is a graduate from the University of Exeter in BA Politics and Arabic with Study Abroad. He is the co-founder and former President of Exeter University Friends of Israel Society and is now Director for Student Affairs for StandWithUs UK .
Related Topics
Related Posts
Comments