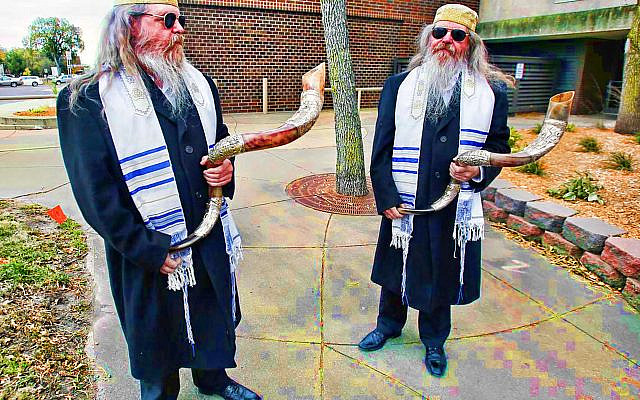 Christianity is and has always been a seriously misguided exercise in cultural appropriation of Jewish culture, whether it’s the often-incorrect translation of the Tanach, or attempts to combine it with Judaism in order to legitimize it. Of course, it’s almost never done as a way to praise Judaism, Jews or our culture, but to “take it over” and often use to take away from our own faith and heritage. At least for the majority of the last 2000 years, Christians have ignored our rituals in favor of their own.

That’s now changed significantly, with Christians stealing Jewish customs and attempting to integrate them into a religion that seems at the outset very anti-Jewish. They use all sorts of terms for their theft, but it’s often called “Jewish affinity” — Christians who integrate Jewish rituals, cultural attributes, symbols, and liturgy into their lives.

Examples can be found everywhere: Carly Friesen, a self-proclaimed “Christian Life Coach,” was exposed on Salon for her Passover Seder invite.

She didn’t celebrate the Jewish faith, she didn’t ask Jews what they thought of it – she just stole the entire tradition and turned it into something that belittled our faith.

“We had a modified Seder meal to start with a reading of the first Passover and recognizing Jesus as the final Passover Lamb,” Friesen wrote, making it clear that Christianity was “superior” to Judaism and had “taken over.”

Turns out that Christian Seders are very popular.

My personal experience with these Christians often comes with a lot  “goy-splaining” — where non-Jewish Christians attempt to lecture Jews about the “truth” of Jewish literature.

Often this is a bunch of rambling, poorly pronounced Hebrew words, and a horrible understanding of the translation — but an insistence that they are completely right about the religion that I’ve studied for over 25 years, intensely.
It’s part of their belief that Christianity is nothing more than Judaism 2.0, even though in reality they have as much to do with each other as Apples and Cows.

The best explanation of this comes from Rebecca Cynamon-Murphy who wrote in April 2014, “Christians may desire to become more Christ-like or to develop deeper understanding of Christian roots.”

She goes on to say that, “Christians celebrating their own Passover do unwitting harm to the Jewish people because they ignore centuries of persecution of Jews — and they do harm to themselves by ignoring their real-life Jewish neighbors, treating them as relics rather than people.

This of course, started with the Christian theft of our scripture. While claiming that Judaism is somehow a broken system, rather than a thriving faith with a rich beautiful history, Christianity appropriated the Torah and Tanach while at the same time claiming it was seemingly dead.

Christians aren’t praising our faith, they are slaughtering it, and taking the leftover skin to wear in defiance like some Hannibal-inspired villain.

This radical reinterpretation of scripture, and claiming someone else’s culture as part of your identity, is totally characteristic of appropriation of cultures. Being welcoming of people of the original culture as long as they’re willing to break with core tenets of that culture is the essence of Christianity’s relationship with Judaism.

I am reminded that every time that Jews reject Christianity, and its attempt to combine itself with our religion, we face enormous persecution, torture and death. This isn’t just a “cute” and “misguided” attempt by Christians to inappropriately savage our faith, but is part of a tradition of trying to convert Jews and then attacking us violently when we refuse.

We can’t ignore this part, that Christianity doesn’t come to us as a “partner” but instead a conqueror.

“3,500 years of persecution, much of it by Christians, is not negated by the relative freedom from discrimination that Jews in America have experienced in recent decades. The horrific fear that so many Jewish people have felt cannot be understated,” Writes Cynamon-Murphy, “From Easter traditions that involved hunting down Jews to pogroms to ghettos to the Spanish Inquisition to the Holocaust, history is rife with this violent legacy.”