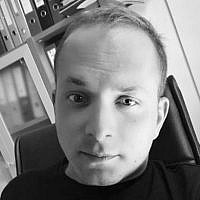 The Blogs
Christos Loutradis
Apply for a Blog
Advertisement
Please note that the posts on The Blogs are contributed by third parties. The opinions, facts and any media content in them are presented solely by the authors, and neither The Times of Israel nor its partners assume any responsibility for them. Please contact us in case of abuse. In case of abuse,
Report this post.

Religion and its connection with politics remain one of the hottest topics of our public discourse. The relation between religion and politics and how they shape the political outcome and decision making in various countries is one of main dilemma and discussion topic of our times, even if church attendance is on decline.

With the election of Donald Trump as President of the United States of America, and the Evangelist rally behind him the discussion up scaled from a semi-private academic discussion in conferences to a world-wide discussion in the most influential media outlets in the world. Religion and in particular the personnel that are members of the official church of major religions are under spotlight for their connections with politicians and the possible influence that they have in important decision making. In the case of the United States of America, some scholars connect the decision of Trump for the relocation of the Embassy of the United States of America from Tel Aviv to Jerusalem with the influence of the Evangelist voters, as it is well known that the biggest majority of the Evangelists respect and celebrate Israel as one of the most important nations of the World for Christianity as the birth place of Jesus Christ and land that the Holy Bible took really place.

The question that instantly arises is if this above mentioned connection between a politician and a religious group is bad in its core. In my opinion, this is not a question that can be answered with a no or a yes as it demands a multi-aspect approach. The second and maybe more important question is if this link between a politician and a religion group dominates the decision making of the politician that leads to the exclusion of other groups and to meritocracy. However, even if the answer would be yes the important issue at this point would be not the group’s demands but the politician’s quality that will set a barrier to the group.

Unfortunately, at this point due to President’s Trump negative reputation everyone associated with Trump’s policy, even if this is a country or a group, suffers in the ethical spectrum with its association with Trump making the relationship between religion and politics not a win-win relationship but a Waterloo for religious and this is the saddest aspect of the story: Politicians with a negative ethical value is something that you are ready to absorb and move to the next quay. Religion with a negative ethical value is sad and dangerous and not right. As Christianity has nothing to do with games of political and societal influence. Christianity is associated with the highest values of humanity. Love .Respect and Discussion. Values that Israel as a country and as a society shares as well. This is the reason why Trump is the problem of the equation and the only winner.