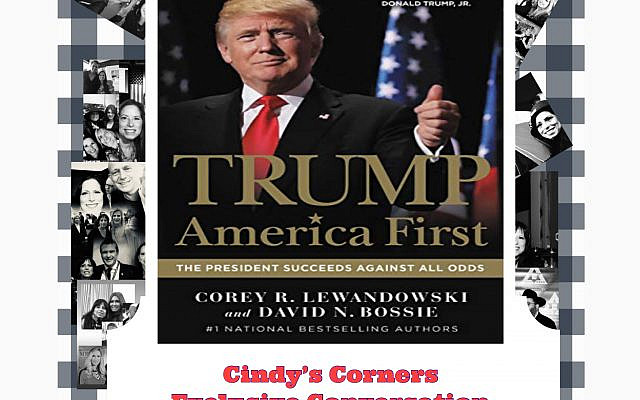 I recently had the chance to sit and talk with David Bossie, Senior Advisor to the Trump Campaign and co-author of Trump: America First. 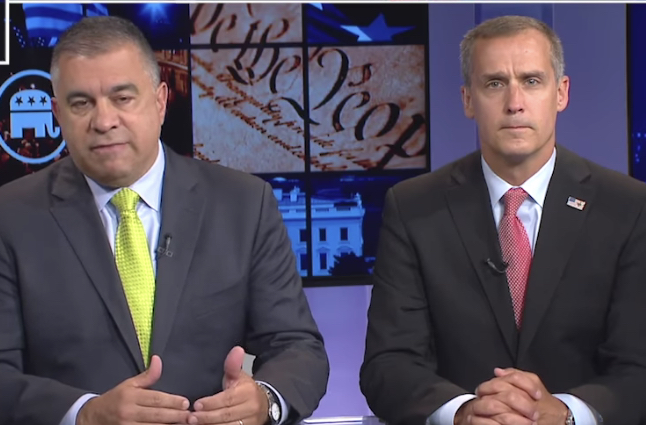 “This has been a campaign like no other,” Bossie said, adding, but there has never been a candidate or President like Donald J. Trump.

Bossie pointed out that both he and his partner in many projects, Corey Lewandowski, are Zionists, having travelled to Israel many times and appreciating the significance of the area for all religions. “The United States and government and people of Israel have never been closer.”

Cindy Grosz: Why did you write this book at this time?
David Bossie: Corey and I came u with the idea because every decision the President makes is al about “America First” whether it’s business, the military or education.
We wrote it from with the intention of bringing the reader front row and center in a motorcade, on Air Force One, sitting around the President’s desk in the Oval Office and evening on tour, backstage at rallies.
C: What do you want people to remember after the the book?
D: People should be able to have all the ammunition and facts they need when confronted by those on the left and win the debate as to why President Donald Trump should be re-elected.
C: This campaign is like no other. What are some of the challenges?
D: Yes, everyday things change like never before. I have four children and my wife and I agree we must do everything we can to protect their future. President Trump is in Joe Biden’s head. He has the press everyday going against him with fake news. We still have no answers on all the redacted emails, hidden documents and the facts of the Obama/Biden administration or just how much money or efforts went into trying to sabotage the Israeli elections during the Obama-Biden administration.

Our discussion went into all the promises made in 2016 and kept by 2020. One example is the Obama/Biden administration’s poor handling of Middle East affairs. They tried and failed terribly. Only President Trump, Vice President Pence and the administration actually succeeded in bringing together leaders and signing peace and normalization agreements. This is a testament to Trump’s promises to fulfill his agenda.

D: President Trump was able to achieve everything in The Middle East because he approached the idea of peace differently.

Every administration previously made promises they were not able to keep because they thought that the Palestinians should be a key player first. President Trump has been able to move the Embassy and bring former enemies into peace agreements by working around them. Their position is different should they ever want peace and recognition from their neighbors. Think about what a brilliant strategy that is. There are several more countries getting ready to sign peace agreements with Israel.

Trump: America First also makes a case for electing Donald Trump to a second term. From revamping our trade with China to replacing NAFTA, from NATO to Kim Jong Un, Donald Trump leaves Joe Biden in the dust.
Bossie noted that President Trump did unbelievably well in both the Latino and African American communities and predicts stronger numbers this time. President Trump delivered economic opportunities to these groups that no one, including Joe Biden, ever did.

New York Times bestselling authors and close advisors to the president, Corey R. Lewandowski and David N. Bossie, write from the front lines of Trump’s battle to keep America great.
Trump: America First gives the reader a firsthand and inside account of the Trump administration’s battle for the soul of America.

David N. Bossie has served as president of Citizens United since 2001. He is currently Senior Advisor to Trump-Pence 2020, and a presidential appointee to the Commission on Presidential Scholars. In 2016, Bossie served as deputy campaign manager for Donald J. Trump for President and then deputy executive director of the Presidential Transition Team. In 2015, Bossie was ranked number two in Politico’s top 50 most influential people in American politics. In 2016, he was elected Republican National Committeeman from Maryland. David proudly served as a volunteer firefighter for over 15 years in Maryland where he lives with his wife and their four children.