Israel’s “change government” has already brought some change: its members are well-mannered and the prime minister and his alternate do not behave like autocrats who think they are the center of the universe. But after two months some people are asking: Where is the fundamental change?

The government recently passed a national state budget. That corrects an extraordinary situation in which Israel operated without one at the height of a terrible economic crisis. This is very important and conveyed welcome sanity, but it is not a systemic change.

Some will say that the ideological diversity of the government prevents systemic change. This is true about the Palestinian issue: the West Bank occupation will have to become more painful for Israelis before public opinion moves enough to cough up a government that feels partition is imperative. But it’s not the case on all aspects of the second issue bedeviling the country, and that is religion and state.

Every change-seeking manager knows it’s best to start with change that is right, logical, popular and possible. And such a candidate exists, right before our eyes: civil marriage.

Marriage is a fundamental right. Most will agree that it’s reasonable to deny it in certain cases – to minors, close relatives, and so forth. But Israel goes much further.

The above groups must either not marry at all, marry abroad and hope that the Interior Ministry recognizes their marriage, or settle for a marriage-like legal contract that seeks to formalize similar rights but without official recognition as a “marriage.” This doesn’t seem right.

Apologists for the status quo will argue that “marriage” is ipso facto a religious construct. That’s reminiscent of US conservatives’ argument that marriage is by definition the union of a man and a woman; the lesbian and gay community rejected this, insisted that words have consequences, and argued that justice must be seen – and they won.

In Israel, the state is in effect telling its citizens that marriage is a purely religious matter. But this does not reflect how most people think of it.

I am married despite little if any religious sentiment, and I certainly seek no validation from the Rabbinate, dominated as it is by extremist bureaucrats from the rather rigid Orthodox Jewish stream, which is a minority among the rest of the Jews of the world. This view is the lot of many and probably most of the secular Jews in Israel.

The problem was starkly illustrated this week with the rise to prominence of Israel’s first Olympic gymnastics champion. 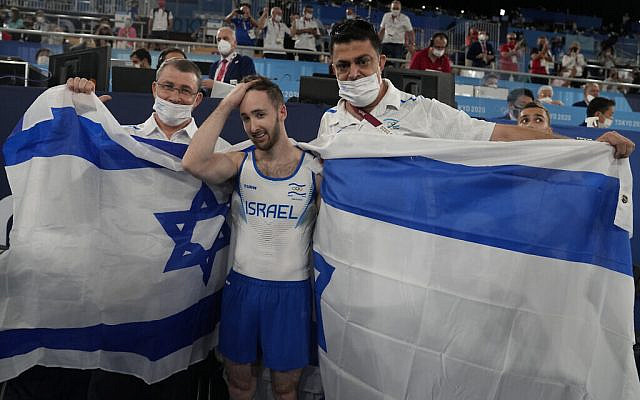 Artem Dolgopyat of Israel, celebrates after winning the gold medal on the floor exercise during the artistic gymnastics men’s apparatus final at the 2020 Summer Olympics, Sunday, Aug. 1, 2021, in Tokyo. (AP Photo/Natacha Pisarenko)

Artem Dolgopyat was Jewish enough to immigrate from Ukraine at age 12, Jewish enough to serve in the military, and Jewish enough to proudly wear the Star of David in Tokyo. He brought great honor to Israel and caused the anthem “Hatikva,” with the well-known verse about the “Jewish soul,” to be played for only the second time in history at the Olympics. But he is not Jewish enough to marry in Israel, because only his father is Jewish, displeasing the Rabbinate and its Orthodox apparatchiks.

There are many hundreds of thousands of people in Israel with this same issue, and many more would join them had ancestors not slipped through the cracks in a more forgiving and rational time. It’s a significant portion of the adult population. This is the fruit of awkward compromises in the early days of the state, when Haredim did not dominate the religious establishment as they do today. In the current circumstances, it does not seem logical.

Few if any countries in the developed world give religion such a monopoly on marriage. Even Iran does not do this (it has civil courts with authority over marriage, although Islamic rules do apply widely, such as the requirement that brides of all ages secure permission from the father).

This situation brings misery to multitudes and disgrace to all, and provides ammunition to the enemies of Israel. It helps those who denigrate the country as a theocracy. It plays into the hands of those who claim that the Jews are merely a religion and not a people and therefore do not deserve a state. It is, indirectly, a gift to the BDS movement that would love to see Israel destroyed.

What Israelis think this a good idea? The answer seems to be not many. Poll after poll shows that a strong majority of around three-quarters – a rarity in this divided land – would welcome the introduction of a civil marriage option. Such a move would be popular.

And it is also possible. Among the right-wing parties in the coalition, the secularist Yisrael Beiteinu will be eager to do so, and the responsible-nationalist New Hope won’t stand in the way. Prime Minister Naftali Bennett’s Yamina party may wobble a little for fear of angering the Haredim (and angry they certainly would be, even if their monopoly on Jewish rites, with its hostility to Conservative and Reform Jews, is maintained for now); but Yamina’s position is fuzzy, considering the bond between Bennett and secularist incoming PM Yair Lapid.

Such a move would confront Benjamin Netanyahu’s Likud with a difficult choice between supporting a reform so obviously right and just or opposing it for fear of the Haredi political parties, without whom Likud is more or less doomed to opposition. They will probably oppose it, outraging many of their own supporters and providing voters with some clarity.

The establishment of civil marriage in Israel would correct a truly absurd situation and signal that the “change government” is worthy of its nickname.