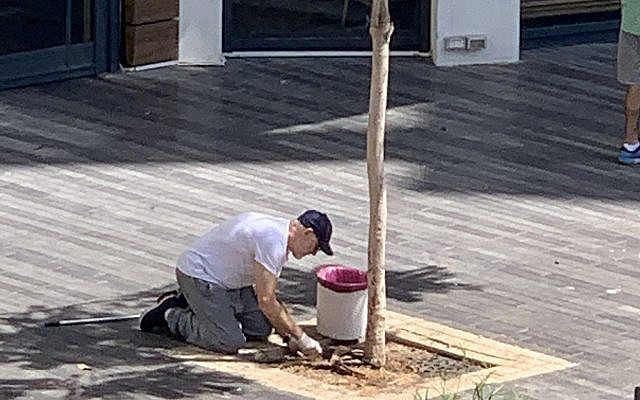 After the missiles. (Judith Kornblatt)

Two people in my apartment complex told me that I was naive.

“Folks don’t care,” they cautioned. “You’ll be all alone, a sucker, a freier.”

Another neighbor insisted that what I aimed to do was the combined responsibility of the complex’s owner, building management, and the Tel Aviv municipality.

“Get management to spend more on maintenance. Petition the city.” Yada yada yada.

Perhaps they were all right. Good for them. You can make a similar argument about seeking peace with the Palestinians. The Arabs and antisemites hate us no matter how nice we try to be. To hell with the Squad and Bernie Sanders. Besides, making peace is the government’s job. Heck, when push comes to shove, we’ve got the Iron Dome.

Nevertheless, last Friday morning, I left my fifth-floor apartment and headed down to the plaza below my window with a garbage can, two paint scrapers, and three pairs of rubber gloves, because I wanted to make a small difference.

While the ceasefire with Hamas was still holding, I put out the word.  As a gesture of hope and renewal, and to help build community spirit, I invited the 200+ apartment-dwellers in my complex to join me in pulling weeds and picking cigarette butts out of the cracks between the paving stones, two challenges that the building staff had trouble handling, thanks to all of the trash that un-caring people leave behind each day. A few days back, the city, after six months of entreaties from management, had sent two men to power-wash the soiled paving stones. The weeds and impacted cigarette butts, however, had not made it onto their agenda, either.

We’re talking about an area smaller than a soccer field, but larger than a tennis court.  Maybe closer to two basketball courts side by side.  Once upon a time, the plaza was home to the famed Maccabi Basketball team.  Back in the day, it was also home to some of the best falafel joints in all of Tel Aviv.  Now, on one side we have my building complex, on the other, a market where you can buy cheap clothing and housewares.

So, there I am, an aging, white-privileged American approaching the two-year anniversary of my immigration to Israel, on my knees, extracting cigarette butts and weeds from around the dozen or so trees that populate the square.  And, low and behold, a member of my community shows up to help! 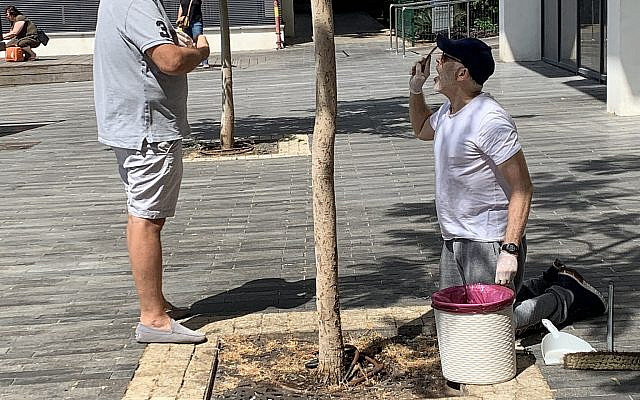 He grabs a pair of rubber gloves, tells me he can only stay a short while, then proceeds to chat me up about building issues, as we two are newly elected members of the Condo Board. But no matter.

My colleague puts in a good 15 minutes, dumps a healthy-sized load of weeds into my pail, and we part with back slaps and smiles. 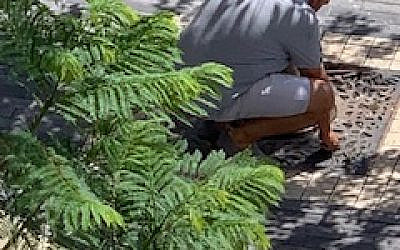 In the trenches. (Judith Kornblatt)

First, a little boy, with his dad and mom in tow, wanders over to where I’m pulling weeds. Very gently he rolls his toy truck next to me. When I look up at him, he smiles. I smile back, and he rolls the truck a little closer.  Then he smiles again.

I ask his parents, in Hebrew, if he did that because he thought I was lonely working all by myself. They smile. Perhaps. In Hebrew the word for “alone” is pronounced l’vad.  The word for Condo Board is vaad. I point out that perhaps he confused the two words, feeling sorry for me, because I’m not just l’vad, but that I am a volunteer member of the vaad. They smile, agreeing that mine is a thankless job.

Second, I find only three mounds of dog shit around the trees. This is a positive sign that pet owners have become more responsible since I moved into my building. Or, maybe they’ve grown more fearful, as the city has launched a Pick-Up-The-Poop campaign with bold signs and threats of steep fines. But no matter. There is noticeably less poop.

I leave the three mounds in place, because they are not on my morning agenda.  And, come on. What kind of freier do you take me for?