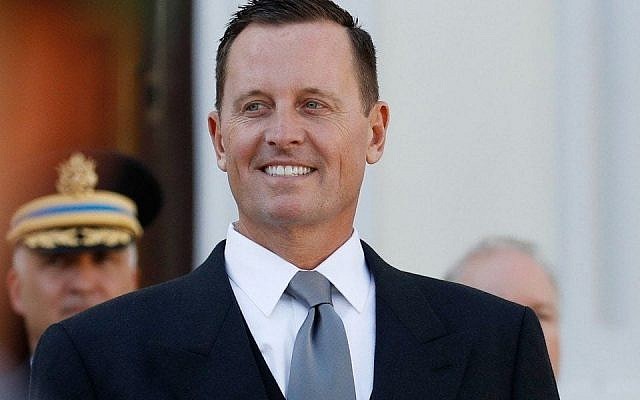 There is no replacing Nikki Haley. The former South Carolina governor and US ambassador to the United Nations was by by the strongest US Ambassador to the UN in my lifetime. Haley led the United States Mission with dignity, passion and resolve. When Haley left at the end of last year, the strong US presence at the UN and strong voice in support of our greatest ally (Israel) left the halls of the UN.

In recent days, we have learned that President Trump’s nominee Heather Nauert has withdrawn her name from consideration, thus leaving an empty slot to fill. We have also learned through this Times of Israel article that the United Nations Human Rights Council is expected to release a massive series of reports criticizing Israel in March.

The anti-Israel bias is gaining momentum at the UN after Haley’s departure. We must fill this role immediately and I can think of no one more deserving and more qualified to step into this critical role then our very own US Ambassador to Germany, Richard Grenell!

Prior to becoming ambassador to Germany, Grenell served as the director of Communications and Public Diplomacy at the UN from 2001-2008. Grenell became the longest serving US spokesman at the United Nations. He knows the in’s and out’s of the UN and already has long standing relationships with leaders around the world. He’s respected and he’s a strong leader that can build and expand on Haley’s legacy.

Grenell has been a strong supporter of Israel, against anti-semitism and against the Iranian regime throughout his career and deeply rooted in his upbringing. When Anti-Semite Louis Farrakhan said “Stop it, I’m anti-termite”, Grenell strongly condemned these comments and called him out as being anti-semitic. When Alexandra Ocasio Cortez made references to the holocaust during a campaign speech, there was Grenell again in condemning her and strongly stating:

When it comes to his stance on Israel, Grenell’s support of the Jewish State is without question. Growing up in Michigan, his mother had a special sign that hung over their sink that read “Pray for the Peace of Israel”. Grenell supported President Trump’s decision to move the U.S. Embassay from Tel Aviv to Jerusalem and Grenell has always stood up for the Jewish homeland.

With regards to Iran, Grenell has supported the U.S. Treasury Department sanctions against Iran. He was worked tirelessly with his allies in Europe to secure support from European nations in our maximum pressure campaign against the Iranian Regime.