The Blogs
Aaron David Fruh
Apply for a Blog
Advertisement
Please note that the posts on The Blogs are contributed by third parties. The opinions, facts and any media content in them are presented solely by the authors, and neither The Times of Israel nor its partners assume any responsibility for them. Please contact us in case of abuse. In case of abuse,
Report this post. 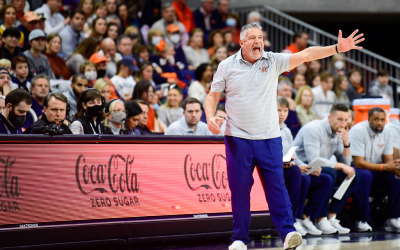 The Auburn University Tigers Men’s basketball team is headed to Israel for the inaugural “Birthright for College Basketball Tour.” The reigning SEC regular-season champion Tigers will compete in three exhibition games against the top teams of Israel. Tigers Head coach Bruce Pearl is no stranger to the competitive world of Israeli basketball. In 2009, Coach Pearl served as head coach for the Maccabi USA men’s basketball team in the Maccabi Games in Tel Aviv where he led the U.S. to win the gold medal. Coach Pearl is one of five Jewish coaches in history to reach the Final Four in the NCAA Division I College basketball playoffs.

I caught up with Coach Pearl in his office at Neville Arena on the campus of Auburn University in Auburn, Alabama, to talk about his team’s upcoming trip to Israel July 31st through August 10th.

Fruh: You are heading to Israel with the Auburn Tigers to face fierce competitors. What are your expectations?

Pearl: It’s going to be great competition. Our first matchup is against the Israeli U20 National Team on August 2nd at Malha Arena in Jerusalem at 8pm. These players are Israel’s best twenty-year-olds that are preparing to go pro. This will be a game that will be very comparable in age between the two teams. In the second game we will be going up against Israel’s All-Star Select Team on August 7th at 8pm at Hader Yosef Gym in North Tel Aviv. This will be a great game. The featured game will be against Israel’s National Team on August 8th at 8pm at Sport Palace in Tel Aviv. This is a professional team – the best players in Israel. This would be the team that would compete against NBA players in an Olympic game. This game will be all that we can handle.

Fruh: What is the basketball fan base like in Israel?

Pearl: Basketball in Israel has for years been a beloved sport. In 1977 after Israel’s National Team beat the Soviet Red Army in the Euro Cup Semifinals, a star player from Israel’s team, Tal Brody, proclaimed, “We are on the map! And we are staying on the map – not only in sports, but in everything.” Tal announced this to a young country four years after the Yom Kippur war as Israel was striving for recognition as a nation. For Israel to beat the Red Army – a team that in 1972 upset the U.S. Olympic team – was like David defeating Goliath. So, Tal was right – that win was a source of great national pride for Israel. So, in all three of these games the Auburn Tigers are walking into the lion’s den because I know how much Israel loves basketball.

So, from a competitive perspective we are looking forward to the challenge. As well, our kids also come from a perspective culturally and educationally that they will return to the U.S. as allies and friends of the State of Israel and certainly for some of my players the dream would be for them to be able to come back and play professionally in Israel because it is such a great country to play professionally because of the supportive fans.

Fruh: How can people in the U.S. watch the games?

Pearl: The games will be televised live from Israel by the SEC Network at 12pm U.S. Central Time on August 2nd, 7th, and 8th.

Fruh: Do you foresee other events like this in Israel where U.S. collegiate basketball teams compete against Israeli teams?

Pearl: Auburn is the first Power Five basketball team to ever play in Israel. This is the beginning of an annual August event we are calling, “Birthright for College Basketball Tour” and ESPN is as excited about this as we are. Auburn is taking the first trip to get the tournament started. In the future, we are looking forward to bringing to Israel the very best teams in college basketball in this August period. Once every four years the NCAA allows a college basketball team to have a foreign tour and my hope is to put Israel on the map for U.S. college teams. Auburn is going to get it started and hopefully you’re going to see schools like Duke, Notre Dame, or Ohio State – the best names in college basketball – come to Israel. This is my goal and dream and we are going to try and make it a reality.

Fruh: Besides the competition, is there another reason for taking your team to Israel?

Pearl: It’s really been a passion of mine to take people to Israel and I’ve been doing that for the last several years. When I travel to Israel and ask people, “what more can I do to help?” The answer is always the same, “keep coming back and bring people with you.” Of course, the greatest way to understand Israel and the amazing place it has become, and the pride the Israelis have in the land and in the people and culture is to see it for yourself. Seeing is believing.

In my walk in being a Jewish basketball coach in Auburn, Alabama I am very close to the Evangelical Christian community and I thank God for their support of the State of Israel. I’m so glad they read their Bibles because it’s all right there. About 90-95% of the student athletes and coaches I coach with and the families I work with are African American. The Jewish community and the black community share so much in common as it relates to slavery and profiling and the struggle to overcome those obstacles. Israel and the Jewish people are a great example of overcoming obstacles and surviving and succeeding. This will be a learning and educational experience for my coaches and players to see how the Jewish people have survived so many challenges and continue to thrive and succeed.

About the Author
Aaron David Fruh is the President of Israel Team Advocates, whose mission it is to change the growing anti-Israel narrative on college campuses. Aaron is the author of five books including The Casualty of Contempt: the alarming rise of Antisemitism and what can be done to stop it (editor), and Two Minute Warning: why it’s time to honor the Jewish people before the clock runs out. Aaron has written for The Jerusalem Post and The Algemeiner.
Related Topics
Related Posts