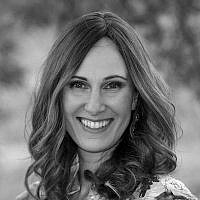 The Blogs
Paula Levin
Apply for a Blog
Advertisement
Please note that the posts on The Blogs are contributed by third parties. The opinions, facts and any media content in them are presented solely by the authors, and neither The Times of Israel nor its partners assume any responsibility for them. Please contact us in case of abuse. In case of abuse,
Report this post.

This week, Sterna taught me the ABCs, and it was just as simple (and life-changing) as learning them the first time round. A is awareness, as we covered in the last column. Awareness of what IS. I spent the week in between sessions simply being aware of my emotions as they arose, without the instant flurry of thoughts trying to feel something different, trying to change what has already happened. Many emotions weren’t pretty or pleasant. Resentment, feeling sorry for myself, feeling down. I decided to wait those ones out. When something felt too painful, I talked about it with my husband, or did something to make it easier to bear – like walk around the block. Having given myself permission to be human, I resisted the urge to immediately feel something more positive – and a funny thing happened. All the energy I usually direct inward was suddenly available to direct elsewhere, and I found myself making a quick succession of major life decisions.

My two younger children (Ari and Aliya) had been sharing a bedroom for three years and driving each other – and me – crazy. All my energy during this time had been directed at feeling bad about losing my temper, telling myself to be a more patient mother and trying to convince myself (and them) that sharing the space is a good way for them to learn to be more considerate human beings. When I finally allowed myself to feel what I had really been feeling all this time – frustrated, trapped and resentful that our house didn’t have enough room – I made the decision to invest money in a renovation so that my son has his own space now that he is 13. This is how it all unfolded.

Sterna explained how we make changes in our life using the ABCD model. “A is for Awareness. B is for belief. C is for Challenge and D is for Direction.” Then she pulled out a visual of an iceberg. “Our behavior is the tip of the iceberg, the part we can see is the result, our observable behavior. But underneath the iceberg a lot more is going on. Our work is to bring Awareness to the things we cannot see. Underneath our behaviors are emotions driving these behaviors. So we need to become aware of these emotions. Underneath these emotions are thoughts, and underneath thoughts are deep-seated Beliefs.”

First I became aware that I was feeling stuck and frustrated about my children fighting. And spending a lot of energy trying to convince myself and them to like an unlikable situation. Then I grew my awareness that this behavior was being driven by the feeling that I was ‘bad’ for feeling frustrated, angry and all manner of negative emotions. “I should be better than this emotion, more evolved, more gracious and more accepting.” I was on a major guilt trip about the emotions I was experiencing. My emotions were driven by the thought that I had to accept the situation and this in turn was based on the unconscious belief that my response to things life throws at me should be acceptance! “After identifying what the belief is – Challenge it!” Sterna instructed. “Ask yourself if it’s true? And sometimes it’s not a yes or no answer. There are nuances to beliefs. Keep asking: where is it true, where isn’t it? What belief is more true?”

When I started to look at my unconscious beliefs, I discovered that they were pretty black and white. Or as Sterna put it in colorful yiddish, “Gor or gornischt”. For a while Sterna had been telling me I’m living on a seesaw of either or. I believed my choices were: either wallow in a negative feeling like resentment or choose to accept a difficult situation.

Armed with the ABCs I realized both those beliefs were false. I could feel resentment while it was there. I didn’t have to accept the feeling as a permanent reality – because no feelings ever are! But I also didn’t have to accept the situation. I could change it! (Please don’t roll your eyes – this was a revelation – my unconscious mind had decided that passive acceptance was the only option). “After challenging false beliefs, new Directions open up,” says Sterna. And indeed they did. I got a quote to add a small bedroom and chose to use some savings to do the renovation. No weeks of discussions and ruminations – blistering fast action.

In general, I’m feeling more energetic – maybe because all that energy directed inward now has other possibilities. I’m excited to see what other directions open up now that I know my ABCs. So many of our beliefs lie under the iceberg. “It’s not that we don’t know WHAT they are, it’s that we don’t even know they are there! And that’s exactly what sank the Titanic,” Sterna points out. I’m really curious about what other behaviors I can start to look at. And I’m excited to bring awareness to the emotions and unchallenged beliefs that are driving them. I invite you to use the ABCs and the iceberg model and dive beneath the surface.

About the Author
Paula is a wife, mother and writer - based in Johannesburg, South Africa, dreaming of Israel. She is a full-time thinker, part-time copywriter at her husband's advertising agency, journalist and published author. The former editor of Jewish Life magazine, she is now a regular contributor with a passion for contributing goodness, kindness and wisdom to this world.
Related Topics
Related Posts
Paula Levin