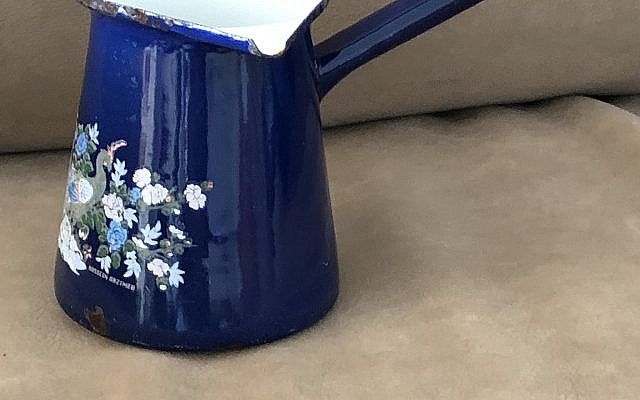 One of Jerusalem’s lesser-known gems is the Museum for Islamic Art, a handsome building situated not far from the Jerusalem Theatre complex and the President’s residence. As well as exhibiting a fine array of objects of Islamic art it houses a unique collection of clocks and watches amassed by the late David Solomons. A large part of that collection was stolen from the museum some forty years ago, but by a series of strange events and coincidences was returned to its rightful home about ten years ago.

But that is not what brought me to its portals. The museum also hosts changing exhibitions on allied subjects, and the current one, entitled ‘Coffee, East and West,’ was enticing enough to induce me to visit it.

Alongside the wide variety of utensils – some purely functional, others more decorative, even ornate — used for the preparation of the brew, which are on display, are informative notices explaining its history and cultural associations.

Thus, the origin of coffee stems from Ethiopia where, so legend has it, a shepherd noticed that after his goats had eaten certain berries that grew locally they would leap about energetically. He decided to try them for himself, and found the taste to his liking. The process of grinding the beans and boiling them in water developed in the region, eventually spreading to the Arabian peninsula.

Initially, coffee was drunk only by men, whether in the home or, later, in coffee-houses, throughout the Islamic world, where women rarely left their house (or tent) and certainly did not participate in public life in any way. The process of preparing coffee entailed the production of special implements, first for grinding the beans into a powder and then for cooking or boiling the liquid to make it more palatable. The exhibition contains a fascinating video of a Beduin grinding the beans in a rhythmic, almost musical way, and this is also echoed in the sound-track to part of a delightful animation video depicting the history of coffee and the journey it has taken to reach the Western world.

Inevitably, the custom of preparing and drinking coffee spread throughout the Ottoman Empire, reaching the dusty region known as Palestine. The coffee-houses were frequented by the local male inhabitants, both Moslem and Jewish, though some rabbis disapproved of the habit-forming brew.

Travellers as well as the failed attempt of the Ottoman army to conquer Vienna brought the drink to Europe in the seventeenth century, and the institution of the coffee-house became increasingly popular. Once again, it was only the male of the species who frequented these establishments, and the idea of women sitting in a public place and drinking coffee was generally frowned upon, Johann Sebastian Bach even went so far as to compose an amusing cantata, the ‘Coffee Cantata,’ in which a father forbids his young daughter to go to the coffee house (one can listen to the music on headphones in the exhibition). The daughter finds a way around this by agreeing to get married, convinced that she will be able to persuade her husband to let her indulge in her passion for coffee. Women were apparently responsible for introducing a less potent form of coffee, mixing it with milk and sugar.

As the custom of drinking coffee spread throughout Western Europe the devices for its preparation and consumption became ever-more elaborate. The exhibition displays delicate porcelain coffee sets and jugs, some with hand-painted decorations, made by the foremost European producers of china. The twentieth century has brought a plethora of refinements in the production of the coffee we drink, with percolators, espresso machines and all manner of electric and electronic devices. Whether we use a machine to make our coffee or simply take a spoon of powdered coffee and mix it with boiling water in a cup, it’s a far cry from the pestle and mortar with which the potent brew originated.

Two things were lacking in the exhibition – the enticing aroma of the drink and the ability to get a cup of coffee there. Notwithstanding its defects, the exhibition is interesting, aesthetic and informative, and it’s certainly worth a visit.