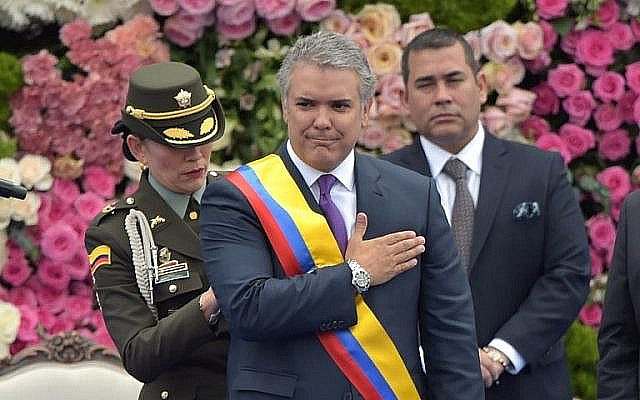 President Iván Duque is on his way to Israel from Dubai in the next few days. After the World Summit on Climate Change in Glasgow, he will leave Scotland for France and from there to the United Arab Emirates to finish his tour in Israel, specifically in Jerusalem where a new Colombian trade office will be opened in the Hebrew capital.

In the following days, President Duque will have a meeting in Paris with the directors of the Organisation for Economic Co-operation and Development (OECD), which is important for Colombia, and beyond that, it is still a challenge for our country to achieve a considerable level in comparison with the other nations that make up this organisation.

In Dubai, President Duque will inaugurate the Colombian pavilion at the World Expo, which was postponed until now, after having to be suspended due to the Covid-19 issue. This “world fair” is a very substantial opportunity for participating countries to showcase their innovation capacity, their products and their latest patents.

The Colombian President’s ten-day trip will also end in Israel. There, he will hold commercial and political meetings of the utmost importance for Colombia, since Israel is an important ally in various areas and a close relationship of international cooperation is urgently needed.

In the city of Jerusalem, where the most important embassy, that is, that of the United States, was moved not long ago, Colombia will open a trade and innovation office, which, as President Duque himself said, will serve to “consolidate the opportunities of the fourth industrial revolution”. Moreover, as ex-premier Benjamin Netanyahu said, it is very welcome that Colombia, the third largest economy in Latin America, joins the other countries that have already opened or are opening such offices.

The FTA signed between Colombia and Israel will be ratified with the opening of this trade office. The “iNNpulsa Colombia” office is supported by the Ministry of Commerce, Industry and Tourism and the Presidential Council for Economic Affairs and Digital Transformation. It seeks to provide Colombian entrepreneurs with access to new markets, cutting-edge technology, knowledge transfer and investment capital funds.

The purpose of this iNNpulsa office is also to promote the sectors of agrotech, cybersecurity, healthtech, edutech, fintech, etc., which Israel knows very well and which could boost the potential of all these sectors in Colombia and, why not, turn Colombia into the most important economy in the region. Although this depends so much on who is the new president of the nation.

However, the GovTech ecosystem, which is managed by Israel, would help Colombia to have a smarter, faster and more accessible government for its citizens, which would increase the quality of state services.

The iNNpulsa office and President Duque’s trip with the government and business delegation, strengthens relations with Israel, after former President Juan Manuel Santos had dealt an almost lethal blow to relations between the two countries, just as his term in office came to an end.

The next step would be to move the Colombian embassy in Israel to Jerusalem to ratify and gratify this relationship between nations.