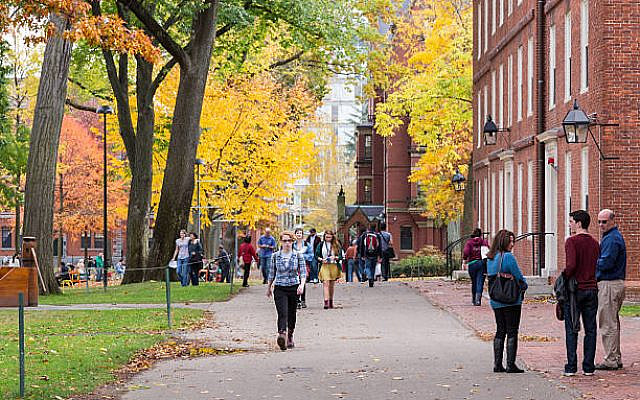 For many Jewish students, this back-to-school season has unfortunately meant returning to increasingly hostile college campuses. In recent years, a growing number of students have reported heightened levels of antisemitism and hostility toward Israel on their campuses – a direct result of the anti-Israel movement’s misinformation crusade to demonize Israel as a racist/genocidal/apartheid/inhumane country. Not only is Israel portrayed as the worst kind of country, but its very existence is also made out to be criminal. In truth, however, a strong, vibrant Israel is a necessary sanctuary from antisemitism and is the best hope for a peaceful Middle East

In a report issued last week, the Anti-Defamation League (ADL) highlighted the proliferation of anti-Israel, anti-Zionist and antisemitic incidents on campuses that have the effect of ostracizing Jewish students. A recent report by Alums for Campus Fairness found that nearly 95% of Jewish students and recent graduates thought antisemitism was a problem on campus, and most saw the problem as only getting worse. Last year, the ADL reported that antisemitism on campus hit an all-time high, with 43% of Jewish students experiencing or witnessing antisemitic actions. This is an intolerable and unacceptable situation.

For example, at the beginning of this academic year, nine law school student groups at the University of California Berkeley amended their bylaws to bar pro-Israel and pro-Zionist speakers from addressing them. At the University of Vermont, there were at least four significant antisemitic cases on campus in 2021 that led to students’ fear of openly expressing their Jewish identity, including one where a sexual assault support group on campus actively excluded Jewish Zionist students. In 2020, a student government leader at the University of Southern California felt harassed and intimidated by hateful anti-Israel rhetoric. This list, sadly, could go on and on. No doubt, between the writing and publishing of this article, other incidents targeting Jews will take place.

At Harvard, my alma mater, a group of students – a self-proclaimed “Palestine Solidarity Committee” – disrupted this year’s Freshman Convocation Ceremony with a banner that exclaimed “Veritas? Here’s the real truth: Harvard supports Israeli Apartheid” while chanting “free Palestine.” This, coming from a campus where the Harvard Crimson newspaper shockingly endorsed the dangerous Boycott, Divestment, and Sanctions (BDS) movement, repeating baseless lies that seek to undermine the legitimacy of Israel, isolate Israel on the world stage, and ultimately dismantle the world’s only Jewish state.  Following suit, the Wellesley News on September 28 shamefully endorsed BDS and the dangerous “mapping project” that demonizes a wide cross-section of Jewish institutions. Again, this school newspaper bought into a false and dangerous narrative about Israel, one that creates a hostile campus environment for students and faculty alike.

One of the many reasons I enjoy visiting Israel, as I did this August, is to experience Israel as it is, not as it is constantly and falsely portrayed by Israel haters.  I witnessed Jews and Arabs living their lives, interacting peacefully, shopping, working, traveling. I took busses to the Jewish Quarter of the Old City driven by Arab bus drivers, and I had my Rav Kav – the Israeli equivalent of a Metro card – checked by Arab bus and light rail employees. I walked through parks with Arab families enjoying the warm weather as I was, and I sat at restaurants with Arab patrons.

Every day, Israeli judges, doctors, nurses, pharmacists, electricians, and builders, to name a few professions, carry out their jobs side by side with Jews. I am of course not ignorant of the serious tensions, between Jews and Arabs in Israel, and certainly between Israelis and Palestinians, but those tensions do not define Israel. To do so dehumanizes Israeli Jews and Arabs alike. Rather, Israel is a thriving democracy dedicated to building a society where Jews, Muslims and Christians, can live freely even as it continues to face terrorism and threats to its very existence on a daily basis.

Members of Congress have taken notice. Cong. Ted Lieu (D-CA) announced a bipartisan letter signed by 39 House members calling on the U.S. Department of Education’s Office for Civil Rights to move expeditiously in responding to the alarming explosion of antisemitism on the nation’s college and university campuses. With the urging of legal nonprofits like the Louis D. Brandeis Center for Human Rights Under Law, the Department of Education this year opened investigations into the incidents at the University of Vermont, the University of Southern California and Brooklyn College, to name a few, demonstrating potential repercussions to the discrimination and harassment of Jewish students. These egregious occurrences – evidence that blatantly false anti-Israel narratives have effectively taken root on many college campuses – however, remain all too frequent and almost certainly underreported.

Congress along with civil rights groups can play an important role in overseeing the Department of Education’s efforts to identify, report and combat antisemitism on campuses, while empowering Jewish students to speak out and not feel they must choose between their identity and their participation in campus life. Sadly, the global efforts to demonize Israel has taken root on American campuses, with the impact on Jewish students all too clear.

We must continue to fight back against hostile attempts to undermine, demonize, and delegitimize the sole Jewish state in the world and recognize how it fosters antisemitism and fear. Jewish students must not feel they must hide their Jewishness nor their support for Israel; they should not feel unwelcome or afraid on their campuses; and we must not tolerate attacks on Jewish students for their identity and beliefs. If we don’t act now, it will only get worse, and then, perhaps, we will look back and ask, “how did this happen?”