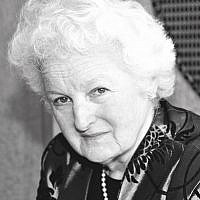 The Blogs
Julia Neuberger
Apply for a Blog
Please note that the posts on The Blogs are contributed by third parties. The opinions, facts and any media content in them are presented solely by the authors, and neither The Times of Israel nor its partners assume any responsibility for them. Please contact us in case of abuse. In case of abuse,
Report this post.

On Thursday, Reform Judaism hosted a one day conference on loneliness, entitled ‘Combatting loneliness and isolation- all the lonely people, where do they all come from?’ I’m delighted it’s taking place at my synagogue, West London, where we have been trying to deal with some of these issues for years. Everyone has seen the headlines screaming out data about loneliness in the UK, mostly, but not entirely, amongst older people. But action in response has been slow, and distressingly patchy.

The Campaign to End Loneliness cites data showing that 17% of older people are in contact with family, friends and neighbours less than once a week and 11% are in contact less than once a month. It’s also the case that over half (51%) of all people aged 75 and over live alone. They are not all lonely, but there’s an increasing likelihood they will become so as they get older. Two fifths of all older people (about 3.9 million) say the television is their main company. 59% of adults aged over 52 who report poor health say they feel lonely some of the time or often, compared to 21% who say they are in excellent health, and a higher percentage of women than men report feeling lonely some of the time.

Loneliness also has serious health implications. Some suggest that chronic loneliness is the equivalent detriment to health as smoking 15 cigarettes a day. But, whatever the data, the truth is that huge numbers of people in our relatively wealthy, relatively comfortable society, are lonely, and we as a society have to do far more about it.

Reform Judaism has taken on this challenge, with a major initiative, Communities that Care, offering training and support especially to smaller communities. Large communities, such as my own, already try to tackle it- with tea parties, with telephone befriending, and, particularly at this time of year, with phone calls in bad weather to check those living on their own are managing. Reform Judaism held a telethon in which some community members called others who might be isolated; this activity, along with tea parties, has clearly been transformative in helping congregations shape care provision.

For what is a community for if it does not support those who are lonely and/or alone? Of course people come together to pray and to socialise, to study and to have fun. But some members become too old and frail to get to synagogue- and that’s where a virtual synagogue, with services live streamed and regular befriending calls, can make all the difference. We’re told that people really look forward to a call from a fellow member, and, indeed, a visit. Pesach parcels, Rosh Hashanah parcels, the odd bunch of flowers- these are all excuses for a visit, a chat, and the chance to check all is well.

For me, this is really the main purpose of a strong religious community. It is living our principles and making sure our own members, and others beyond, are cared for. “Lifnei seivah takum”, we are told in Leviticus. You shall stand up before the grey haired. It’s not so much the standing that’s required these days- it’s phoning, visiting, chatting, having a drink, and in bad weather or particularly lonely times, such as round Christmas and New Year, just checking all is well.

It is not be hard to do some of this, but it does require organisation, commitment, and indeed a passionate belief that this is a mitzvah we cannot miss, for everyone’s sake. The more we can do it, the more it will become the norm. I’ll visit housebound people now. When I become housebound the next generation will visit me. And so on. If a community means anything, it means mutual support- both giving and receiving. And that’s why this conference matters.