Last Thursday evening while traveling on Highway One near the Ein Hemed interchange, Davidi Dahan and Moshe Feuer received an emergency alert from United Hatzalah’s dispatch and command center notifying them that there was a case of extreme exhaustion and a threat to human life at the Harel interchange near Mevaseret Tzion. The emergency occurred just at the exit to the newly opened tunnels on the highway itself. The two United Hatzalah volunteers arrived at the scene in 90 seconds. Davidi began asking the patient about their medical history. 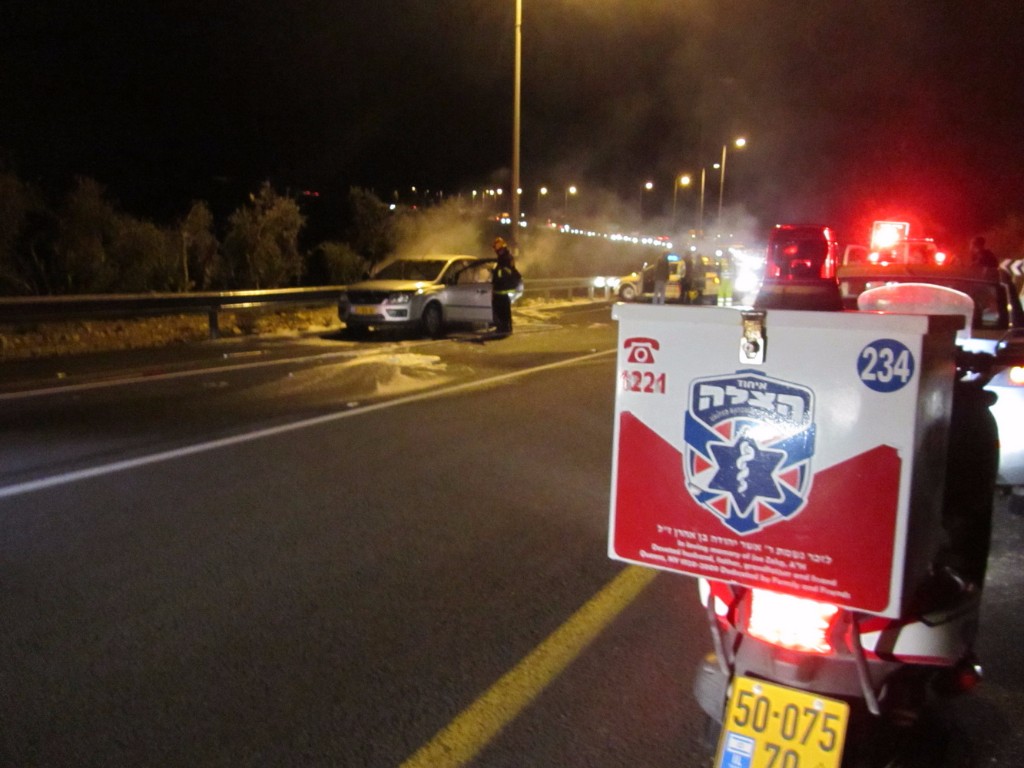 60 seconds later, another EMT arrived who was on his way home to Beit Shemesh. He began taking the patient’s vital signs. Two minutes after he arrived, a police cruiser from Mevaseret pulled up to the scene. The officer driving was Ophir Ben Yitzchak, who not only volunteers as an EMT with United Hatzalah, but also heads the Mevaseret United Hatzalah team. He blocked off the lane on the highway and secured the scene. After he secured the area he switched gears and began to help treat the patient.

The patient now had four responders assisting her. To add more expertise to the scene, after another two minutes, Psychotrauma and Crisis Response Unit Director Miriam Ballin arrived. Her husband Adam Ballin, a Doctor and United Hatzalah volunteer, arrived with her and also got to work. 20 minutes after the emergency call went out, the ambulance had still not arrived at the scene.

At this point, the patient decided after receiving high quality care from the gathered responders, that she was feeling better. She decided to no longer wait for the ambulance to arrive and wished to head back home, but she felt uncomfortable driving and asked for help. Moshe Feuer immediately volunteered to drive the woman to her house and asked her where she lived.

“Nine Nissenbaum street” replied the patient. Moshe and Davidi drove the woman home with Dr. Adam and Miriam Ballin following close behind. While en route, the ambulance called her. In a very elegant tone, the woman said, “The Police, as well as a number of other kindly citizens who had arrived at the scene already helped me and I am on my way home. I am no longer in need of your services. Thank you.”

Davidi described the gratitude of the woman’s husband as they arrived at the house. “When we arrive at the woman’s house, her husband rushed out and thanked us again and again for helping his wife and for the professional care that she received. He also mentioned how grateful he was at having the professional care over the telephone from the dispatcher, which he said calmed him considerably during the emergency.”

President and Founder of United Hatzalah Eli Beer said, “United Hatzalah brings volunteers together from across Israel. It is no surprise to me that this many responders from a number of different locations were all able to converge at the same emergency and help treat this patient. This is what our country-wide network of volunteers is for. By utilizing our advanced location technology we can alert the closest responders to any emergency anywhere in the country. This model is particularly useful for car accidents that often require GPS to pinpoint the exact location of the driver in need and even the direction which the car was going to enable responders to arrive as fast as possible. Our team of volunteers is highly trained and active 24/7 to provide the highest level and fastest care possible.”