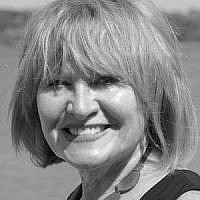 The Blogs
Hindy Nosek-Abelson
Apply for a Blog
Advertisement
Please note that the posts on The Blogs are contributed by third parties. The opinions, facts and any media content in them are presented solely by the authors, and neither The Times of Israel nor its partners assume any responsibility for them. Please contact us in case of abuse. In case of abuse,
Report this post.

As a child of holocaust survivors, whose mother’s three children – all under the ages of 10 – were shot in front of her eyes by the Nazis and whose father’s first wife and 10 year old daughter were gassed in Treblinka, my heart weeps at images of desperate people clamouring to get into Europe to protect their children from a similar fate by ISIS. Clearly the hordes of refugees who risked drowning and now bang on Europe’s doors desperately need to be taken in and given safe refuge.  And it needs to happen now.

Hundreds of thousands (perhaps millions) of Druze, Kurdish, Yazidi, Christian and other minority groups are being targeted for extermination in Nazi fashion by ISIS. These people are desperately trying to save their families from annihilation. The same blanket amnesty should also be applied to mothers and children from all backgrounds and religions.They pose little or no security threat and should be allowed in without delay.

However, to ignore the fact that some male refugees could be radicals and to open the borders to them helter-skelter without security screening would amount to short-sighted folly. The refugee problem is complex and, whether we like it or not, could have long- term ramifications. It deserves a humane response that consists of more than the simplistic solutions and catch-phrases currently being promulgated by the right and left, both of whom inaccurately paint all people with the same brush, be it with the hostile paranoia of the right or the benevolent naivete of the left.

While we open our hearts and doors to masses of refugees, it would be irresponsible to dismiss Western fears. The Charlie Hebdo massacre; the killing of shoppers at a kosher supermarket in Paris; the slaughter of innocent children and teachers at a Jewish day school in Lyon; the shooting of non-Jewish tourists innocently visiting a Jewish museum in Brussels; the harassing of visibly Jewish citizens; the bombing of the tube in London and other terrorist acts around the world give credence to the fact that, despite the dire urgency of the current situation, this reality shouldn’t be totally dismissed for the sake of expediency. As a Jew and child of survivors I find the sight of so many innocent victims of genocide too upsetting for words. As a Jew, I also find the prospect of more terrorism directed at my people as upsetting. Although security screening may not be foolproof, abandoning the screening process for high-risk individuals would be foolhardy.

Opening the gates and welcoming minorities who are fleeing genocide perpetrated against them by ISIS or women and children fleeing a brutal civil war will give instant freedom to a large number of refugee families. While screening high risk men will constitute the best available method of protecting European and Western societies.

Because of my personal history, the horror of desperate people, fleeing from unspeakable genocide perpetrated against them by ISIS, beats every other issue in importance. It is also the consequence of an indifferent world which, since it has again failed to act, is currently facing the tragic results of its inaction.

The only permanent solution, would be for all countries (including the Arab States) to finish off ISIS once and for all. What choice is there? If the world fails to eliminate ISIS, the ethical and concrete consequences will haunt us for years to come.

Yet with their usual proclivity for moral-equivalence the left naively equates a war against ISIS with unjustified wars fought in Vietnam, Iraq and elsewhere. While the right,  who is always prepared to load and shoot, heartlessly howls for latching the gates, filling the moats and defending the motherland.

Tragically, just as it is in Europe and the US, our choices in Canada for the upcoming election are inadequate. Neither our Liberal leader Justin Trudeau (a mere shadow of his famous father) or Thomas Mulcair of the left-leaning NDP party have the stomach or moral tenacity for any kind of war – justifiable or otherwise. While our right-wing Conservatives who do, heartlessly advocate keeping all but a token trickle of people out. That puts me, a lifelong liberal, who understands the pain of losing family to inhuman creatures like ISIS, in a political no-man’s land.

Let me add that I’m also puzzled by a left who, at a time when unspeakable acts of genocide such as the beheading of children and infidels,the stoning of women, sexual slavery, wanton destruction of history and other hellish deeds are happening to innocent people throughout the Middle East, still feels self-righteous in their obsessive focus on boycotts, divestments and sanctions against the tiny, flawed but democratic State of Israel (in yet another sign of inane, moral equivalence),

Is the world in a screwed up mess? You betcha! With the dawning of the Jewish High Holidays, all I can think of is to utter a desperate plea to all deities, that sanity, tolerance and wisdom prevail and that the end of hate and barbarism take place within our children’s and grandchildren’s lifetime. And….just in case ‘He’ is actually listening…I’ll add “The sooner the better” and end with a heartfelt “Amen”.

About the Author
Hindy Nosek-Abelson is a Toronto based Canadian writer, blogger, translator and not-for-profit professional who has worked with Jewish and non-Jewish social service and political organizations in the field of development and PR for most of her life. She also a translator of Yiddish songs and poetry whose lyrical translations have been published, recorded and performed internationally.
Related Topics
Related Posts
Hindy Nosek-Abelson
Comments