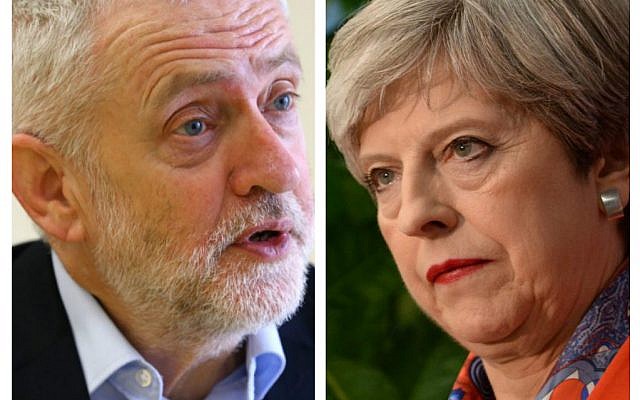 Jeremy Corbyn and Theresa May

When thinking about the Labour Party, it is hard to get beyond images from the Liverpool Party conference of Luciana Berger accompanied by a bodyguard in the city she represents as an MP. Typically, Jeremy Corbyn acolytes seek the diversionary tactic of pointing out that another Labour member, Jo Cox, was assassinated by a right-wing fanatic, as if this allows the antisemitic left off the hook.

The response of Labour’s general secretary, Jennie Formby, to queries about antisemitism is to say that the matter had been successfully resolved. That plainly is untrue, with the party having added its own rider to the International Holocaust Remembrance Alliance (IHRA) definition of antisemitism. There are enough complaints of antisemitic abuse, 250 on some counts, to keep Labour tied in knots for years.

In conversations in the succah in the past week, it has been hard to escape the Corbyn stigma and the general fears the Jewish community has of a Labour government. No one is quite clear of Labour’s path to power. It could be a vote of confidence in Theresa May over Brexit, or something else, but the probabilities are serious.

Community anxieties mean that reasons for Labour’s broader appeal, especially in London and among younger voters, is barely discussed. Yet anyone focused on the Jewish liturgy during the Days of Awe could not but be aware of Judaism’s social justice agenda.

Among the reasons for the populist political votes across Europe in recent months is the belief that the impact of the financial crisis was to create great new inequalities. Low interest rates benefited the rich while the least well off have been victims of payday lenders such as Wonga. Uncomfortably, Wonga is the creation of former Israeli paratrooper Errol Damelin comfortably ensconced with the £45million he received when it floated on the stock market.

What Labour is able to tap into is a deep sense of unease about the way capitalism is working. The average pay for FTSE100 executives climbed by 11 percent in the past financial year to £3.93m at a time when the wages of employees barely have outpaced inflation. Among the FTSE100 bosses the most egregious offender has been Jeff Fairburn of York-based house builder Persimmon whose pay check was so offensive at a potential £130m that it was capped at £75m.

Other serial overpaid executives included Sir Martin Sorrell, formerly of WPP, whose pay was chopped from £70m to £20m before he resigned amid allegations of inappropriate behaviour. Fortunately, not much has been made of Sorrell’s Jewish background, which would be fodder for traditional left-wing antisemitism that says Jews control the world.

That, incidentally, has been the thrust of hostile correspondence I have received since writing in the Daily Mail of my disgust at Corbyn’s anti-Zionism.

When it comes to social justice, there is a case for government to answer. The average boss’ pay in the UK is now 145 times that of the workforce. Boardroom pay and dividends have risen inexorably since the financial crisis of a decade ago, but employee salaries and household incomes have been static.

Proposals by Labour’s John McDonnell to address the problem by forcing companies to disgorge one percent of their ownership (rising to 10 percent) into an ‘inclusive ownership fund’ is the economics of the madhouse. It would undermine share prices, dividends, pension funds and willingness to invest in the UK. But steps to tackle fairness in the workplace including a higher minimum wage, more profit sharing, fairer bonuses and less greed at the top make sense.

By casting an unfavourable light on greed in the boardroom, Labour is onto a winner. Similarly, proposals to nationalise railways  and water companies and build one million social homes sound wonderful.

Worryingly, people vote with their pockets not on antisemitism. The Tories will play right into Labour’s hands unless they attend head-on the social justice agenda.