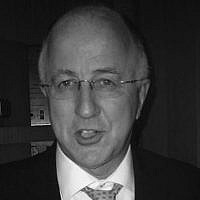 The Blogs
Denis MacShane
Apply for a Blog
Please note that the posts on The Blogs are contributed by third parties. The opinions, facts and any media content in them are presented solely by the authors, and neither The Times of Israel nor its partners assume any responsibility for them. Please contact us in case of abuse. In case of abuse,
Report this post. 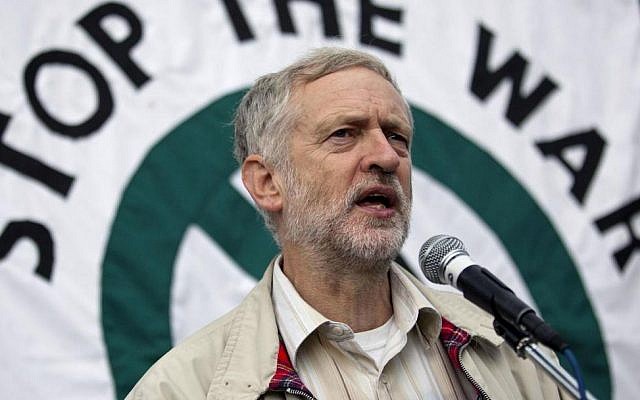 Jeremy Corbyn at a Stop The War demonstration in 2012. (Credit: Jewish News)

The old rule in Westminster was that if a story was on the front pages for five days or more then it was political death for whoever was involved.

But Jeremy Corbyn enjoys political immortality after the failed efforts to remove him by Blair-Brown generation Labour MPs in both 2015 and 2016 and then the failure of Mrs May’s 2017 general election gamble.

Anti-Semitism has never been easy for Labour. Clement Attlee was once asked why he didn’t make the very able young Labour MP Ian Mikardo a Minister after the 1945 election.

“Oh, I think we have got quite enough of the chosen race as ministers,” was his reply. Labour has always had powerful anti-Israeli MPs like Christopher Mayhew or Andrew Faulds ready to promote the Palestinian cause and attack the Israeli government.

The problematic definition that is causing all the trouble was first drawn up by in 2005 by the EU Monitoring Centre on Racism and Xenophobia. Its definition of anti-Semitism is largely the same as the one Labour refuses to accept today.

In my 18 years as an MP I heard far more anti-Israeli statements in the Commons from Conservative MPs than I ever did from Labour MPs.

The staunchest defender of Israel, who rose time and time again, to correct some crude attacks on the right of Jews in Israel to live without fear of terrorist attacks or a new wave of Hamas missiles was the Labour MP, Louise Ellman.

There is a bottomless well of money from Gulf states to fly MPs out to luxury conferences or pay so-called speakers fees of several thousand pounds to any MP who looks like a future minister.

There is a shuttle service of trips to the West Bank for MPs to hear the Palestinian point of view. By contrast, Israeli public diplomacy is weak and relies too much on preaching to the already converted in the Jewish community.

In nearly two decades as an MP, Minister and Council of Europe delegate I could have gone every other month on an all-expenses paid trip to the West Bank or on a jolly to resort hotel in the Gulf.

By contrast, I was never once asked to visit Israel and my work on anti-Semitism including chairing a House of Commons All-Party Committee of Inquiry into Antisemitism and writing a book Globalising Hatred: the New Antisemitism came from a life-long commitment to exposing all forms of racism and xenophobia of which Jew-hate is in historical terms the most murderous.

There is a real problem for many Labour MPs outside of London and one or two big cities where Jewish activists play a role in the Labour Party.

The UK now has a vibrant Muslim population with stars in politics, the media, the professions, and business. Some join political parties to get help with cousin marriages, planning permission, or taxi driver permits. A tiny minority seek to promote Islamist ideology.

A core belief of 21st century Islamism is that Israel has no right to exist, is a colonial settler state, and treats the Palestinians living in the Holy Land as second or third class citizens little better than black South Africans under apartheid.

That is what all MPs, not just Labour hear from some Muslim activists in their local parties. Jeremy Corbyn has not changed many views over the 35 years he has been an MP. On Europe, America, free trade, open market economics, or on Israel what he came to believe in the 1970s he still believes today.

Because he has an absolute personal conviction that he is an anti-racist and loathes the extremist nationalist identity politics that gave us Nazism it is impossible for him to be anti-Semitic.

He knows he has shared many platforms with political activists considered untouchable who later became partners in peace processes like Sinn Fein-IRA in the British Isles or FARC in Colombia.

The more he is attacked the more he digs in, hunkers down, and like another famous political leaders, he says in effect “You turn if you like, Jeremy’s not for turning.”

So the anti-Semitism row is set to rumble on. With luck Labour MPs will vote to adopt the widely accepted definition of anti-Semitism and that will draw a line. At least the swift suspension of Labour activists, including prominent ones, who make anti-Semitic remarks shows that the days when those who hate Israel and Jews could say what they liked without being checked are over. Corbyn says just 0.1 per cent of Labour Party members are guilty of statements that hurt Jews. That is still 500 men and women. Labour has to act swiftly and condignly. As the Conservative Party twists and turns over the rank Muslimphobia in its midst exemplified by Boris Johnson’s contemptuous disregard for appeals from the Prime Minister and other top Tories to apologise for his offensive remarks about Muslim women, Labour should take the high ground by ridding itself of all anti-Semitic members.

The Iphone or Android with its video and voice recording is now a powerful weapon against anti-Semites and indeed Muslim-baiters where the Conservative Party now has a serious problem.

But Labour has almost certainly kissed goodbye to any chance of winning key North London seats and Britain is unlikely to elect as prime minister any leader who refuses to take all necessary political party measures to combat anti-Semitism.

Anti-Semitism is on the rise in France, Belgium, Hungary though in those countries it is linked to right-wing political parties not the democratic left.

Corbyn has had four major tests since he became leader. He won in the contest with the the Blair-Brown generation MPs who tried to oust him in 2016. He won again in last year’s general election. He has not known how to offer leadership on Brexit but hiding under the duvet and leaving the Brexit impasse as a Government problem that Mrs May has to solve as her handling of Brexit has not impressed may be smart politics. But now he has failed badly in handling the exposure of anti-Semitism in Labour’s ranks.

Labour has sensibly dropped the disciplinary threats against Margaret Hodge and Ian Austin. Quietly accepting the European standard definition of anti-Semitism would help finally to shut down this summer anti-Semitism storm for Labour. That requires the real leadership of accepting a major error of judgement took place. Is Corbyn capable of telling himself he made a mistake and should move on?

About the Author
Denis MacShane was a Labour MP for 18 years. A former President of the National Union of Journalists he has written and spoken on modern anti-semitism. His books have been on Europe and Brexit
Related Topics
Related Posts
Comments