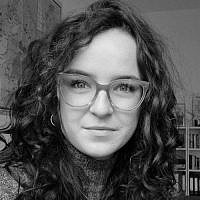 The Blogs
Klara Strube
Apply for a Blog
Please note that the posts on The Blogs are contributed by third parties. The opinions, facts and any media content in them are presented solely by the authors, and neither The Times of Israel nor its partners assume any responsibility for them. Please contact us in case of abuse. In case of abuse,
Report this post.

We had long been aware that something radical had to happen.

No, really. If we are honest, we all knew long ago that the problems we had gotten ourselves into – climate change, social injustice, proxy wars, refugee crises, a political shift to the right – could only be tackled by radical measures. We didn’t know what they would look like (for some people, meat tax and speed limits on our motorways are already a radicality of an intolerable scope, while others are prepared to voluntarily carry twenty glass jars to a sustainable store to avoid plastic waste), but we were quite sure that they would come – and they would come both on the right and left of the political spectrum. Whether it was closed borders and reduced foreign trade or a ban on internal combustion engines, everyone wanted at least something fundamental to change.

Now exactly this situation has arisen: Something is changing very fundamentally. Nevertheless, nobody is happy. It’s funny, but easy to explain. Because unfortunately the change did not come about in the way we had imagined. And neither left nor right, neither young nor old can really deal with it.

We wanted it, but differently. Yeah. So now I have to say, swinging the linguistic sledgehammer and inappropriately patronizing for my age and position: tough luck.

For thousands of years man has made himself vulnerable in the same place over and over again. And that with the deep-seated conviction that he himself knows what is best for him. On this belief he then builds expectations, which are usually disappointed in the end, then he is sad, resigned and concludes that life sucks and makes no sense because he hasn’t gotten what’s best for him.

Enough abstractions, you probably already know what I’m getting at. The Earth – sorry, humanity – is currently experiencing a global pandemic, we are all supposed to stay at home, and nobody knows for how long. In extreme cases, experts assume an 18-month quarantine, with recurring shortages of essential items of daily use. People are dying, nobody knows how third world countries will deal with this virus, nobody knows how long this will go on for and how bad it will get. Sounds scary, I know. And if you love to panic, then I strongly recommend that you look at the current situation in the same way: With a little voice in your head that keeps screaming, “We’re all gonna die!”

If, on the other hand, you are prepared for a brief change of perspective, then maybe consider the following:

The problem with blessings and curses has always been the same. When you are in the middle of it, it is difficult to tell the two apart. Normally neither of them comes in the facing we had imagined, and this problem of appearance mixed with too little distance in time (note: afterwards one is always smarter) often leads to misidentification. Little self-test: Think of any event you experienced about ten years ago and that was quite horrible. Imagine further that this event would not have happened and that instead you could have continued your plans from ten years ago undisturbed, for about ten years. Compare the situation you have just created in your head with the current one. Better?

Anyone who is capable of realistic self-reflection without extensive self-pity will find that his life might have looked different, but not necessarily better, perhaps even significantly worse, if he had not gone through hell every now and then. And what is true on a small scale is often true on a large scale, you can consult Stephen Hawking about that. So let’s transfer this knowledge from our private lives to the corona problem and assume for a moment that this is a net positive event. If we look back at 2020 in 2030 as people who are ten years older and smarter, we might remember a destructive pandemic. Or we could tell the following story:

At the beginning of 2020, the world lay in ruins. Most of us didn’t want to see it, because man is always closest to himself, and we had created a prison of system failures that slowly let our world collapse upon us like a house of cards. Much of Australia was destroyed by bush fires. The next refugee crisis was on the horizon, Turkey was at war with a shattered Syria, Putin had signed billions in arms deals with African nations, the US was ruled by a crazy millionaire, Europe’s policy became worryingly right-wing, the British had just left the EU, global warming was still racing towards the point of no return, but nobody seemed to care. While everyone was talking about how everything was getting worse and worse, everyone stayed at home, went to work, earned money which they could then spend on an SUV or in a steak restaurant or on a budget flight to the Maldives. We were all blind while we were rushing towards a rock face.

But then factory farming in a province in China had produced a new SARS virus, which spread rapidly around the world with a mortality rate of about 6%. The wonderful thing about a virus is that it does not discriminate. It attacks the poor as well as the rich, the white as well as the black, the child in Africa and the own neighbour. A virus is really one of the most effective levelers that nature can create. That’s why we were blessed with a feeling that we should have had for much longer, and now we finally got: fear. We were scared. Politicians were scared, people were scared, scientists were scared, all of them of a common enemy. A stroke of luck, because nothing unites as much as a common, external enemy. And COVID-19 finally delivered just that. A common external enemy.

Suddenly, all the decision-makers were empowered to take action. Borders were closed, air traffic was almost completely shut down. All non-essential businesses were closed, non-essential personnel was sent home, schools, universities and public buildings remained closed, major events were cancelled. We all stayed home. And then a miracle happened.

Within a few weeks we reduced our global CO2 emissions by half, a goal that would have been unthinkable to achieve half a year earlier. People showed solidarity, the young and fit helped the old and the sick, employers tried to protect their employees, teachers tried to enable their students to learn in a way that suited their new Corona everyday life. In the face of the common external and equal enemy, we suddenly all became the people we should have been a long time ago.

We started putting health before economy and productivity. We cared about fellow human beings. Finally read the books we had wanted to read for so long. Dedicated ourselves to our hobbies. Learned what was really important to us. Spent time with our families, had time to read bedtime stories and bake bread at home. Cleared the garden of weeds and went for a walk, looked at the forest, went on a bike ride. So not only did we all try to avoid getting sick, but we all got well again, and so did our planet.

When an immunization was found and the virus had passed, we all knew again what was really important. Reformed outdated systems, questioned old habits, set new priorities, were no longer afraid of change, because after the COVID-19 year there was no routine left anyway.

So much of what we have today in 2030 exists due to the Corona crisis. People have died, we have suffered real shortages, and in the end we have emerged stronger and better as a species from this crisis. On some sunny spring days, it was even a magical time, the time with COVID-19, and if the virus had not existed, we might have already irrevocably destroyed ourselves and our planet.

About the Author
Klara Strube is a freelance writer and lecturer based out of Berlin. She studied international diplomacy and conflict resolution in Israel.
Related Topics
Related Posts
Comments