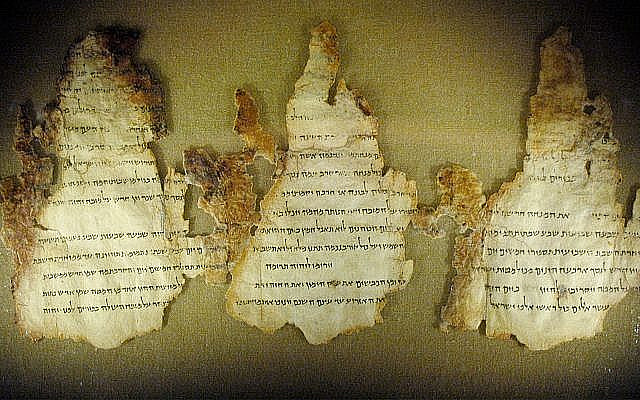 Illustrative: Three fragments from the Temple Scroll, one of the Dead Sea Scrolls, is displayed at the Maltz Museum of Jewish Heritage in Beachwood, Ohio, March 28, 2006. (AP Photo/Jamie-Andrea Yanak, File)

When we returned to Israel after a two-year stint, we took my then-seven-year old daughter to the Israel Museum in Jerusalem. As soon as we passed through the gates (on a Saturday!), we made for the iconic Shrine of the Book Dead Sea Scrolls exhibition. My daughter wandered toward the glass case housing the 1,000-year old Great Isaiah Scroll and began unprompted to read the Hebrew text:

Isaiah Chapter 1: Verse 1: “The vision of Isaiah son of Amoz, which he saw concerning Judah and Jerusalem in the days of Uzziah, Jotham, Ahaz, and Yehizqiyah, kings of Judah.”

I immediately broke into tears. Yeah, they were tears of pride. But they were also tears of gratitude. “This is why we came back to Israel,” I told my husband.

I was reminded of this – decades later – when I read a FB friend’s heartbreaking appeal for advice regarding her daughter’s Fall bat mitzvah. Grappling with the virtually inevitable cancellation of the synagogue event and after-party, she requested no sympathy and thankfully received an abundance. She forestalled the obvious suggestion that she ask her rabbi to postpone the date, saying she had already tried and been turned down. The rabbi explained that next year, as every year, the synagogue was booked with bar/bat mitzvahs for all 52 weeks. Others quickly chimed in that they had received the same response from their own rabbi and were sadly forced to settle for ZOOM.

The Israeli in me was immediately shocked at the unbearable lightness with which the crowd accepted the idea that the bat mitzvah could not be postponed for the given reason. Here in Israel, I suggested, we would be expected to and happy to share a “double-bat-mitzvah” next year on the appropriate Shabbat. The bnei mitzvah could share the Torah portion, and each could give their own drash interpretation of the parsha.

Inspired (and revolted!) by the ill-conceived “Wisconsin Herd Immunity Fest” and the beloved and admirable kibbutz tradition of a bar/bat mitzvah program for the entire class, I also suggested a blow-out Corona Kids Bar/Bat mitzvah Fest – ASAP or whenever convenient post-Corona.

But then, some noted, next year’s bar/bat mitzvah celebrant would have to “share” their event after working so hard on their Torah portion for so long.

I could not (or – mea culpa – did not) restrain myself from pointing out that this would permit the other bar/bat mitzvah to perform a mitzvah. But I also expressed my sincere sympathy at how disappointing this must be for any bar/bat mitzvah and their family, and recognized that the Diaspora’s excess emphasis on showmanship in the aliya l’Torah may derive from how much harder it is for bnei mitzvah to read the Torah in a language not their own. That prompted a – to me – shocking Ah hah! moment on the part of the Diaspora side about how much easier it must be for an Israeli bar/bat mitzvah to read his/her Torah portion in his/her native language.

I assumed (making an ass out of u and me) that it would be obvious to them that no one here would be overly impressed by a 12-13 year old kid reading Hebrew, and that we might be more impressed by what the words meant to them!

This exchange may be the best example I have seen to date of the Diaspora-Jewish and Israeli-Jewish cultural divide:

S**t (like wars) happens here all the time, and sharing nearly anything with others in situations like Coronavirus that are absolutely beyond our control is always tremendously difficult – but by now built in to the Israeli DNA. I am immensely proud of that.

I am also immensely impressed with the long and respectful exchange on the Diaspora-Jewish side in which no one expressed the notion that it was not important for a bat mitzvah to read from the Torah on her day. Both of my daughters were the only female members of their secular class in very progressive secular middle schools to do that. And because I live in a picturesque Jaffa neighborhood, I am treated daily in non-corona times to scenes of bat mitzvah girls being photographed for what they call in Hebrew their “Book.” Think Lilliputian Kylie-Jenner wannabes in multiple – if scant – wardrobe changes uploaded in the best case to one’s Bat Mitzvoosh Instoosh [bat mitzvah Instagram] and the worst to TikTok. I know this happens in America too. But at least most of the girls are expected to read from the Torah – not just vogue, nae nae and twerk.

Finally, I wish the Corona Kids מזל טוב! and the best celebrations ever. Happy birthday this Shabbat to the great Great Isaiah Scroll reader mentioned above! And for the record, she – the granddaughter of three Holocaust survivors – named her first son Yotam – Jotham.