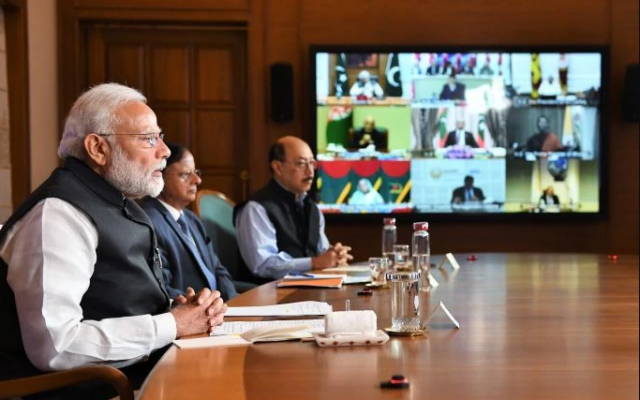 How the leader of the world’s biggest and most diversified democracy, who holds the responsibility of 1.3 billion lives and one-sixth of humanity, should respond to a global pandemic situation? As we are counting the number of Coronavirus confirmed cases and death tolls every hour, it is important to acknowledge that a disease that spreads through the community transmission requires strong community support to fight out. A world that is practicing Social Distancing will have to often remind itself that to deal with this crisis and other future challenges, the elements of mutual usefulness, cooperation and collective efforts will remain essential. Amid the Coronavirus crisis, Prime Minister Narendra Modi presented a model before the other democracies when instead of imposing penalties and forceful restrictions on community exchanges, he first decided to do a basic but rare thing of our times- that is putting faith on the sense and moral abilities of the common people.

PM Modi appealed his citizens to follow a 14 hour long ‘Janta Curfew’ (People’s curfew) on 22nd March, which he said: “will be a symbol of our effort, of our self-restraint, and our resolve to fulfill our duty in service of the nation.”

It takes enormous sensitivity to communicate the message of distancing to a society which is deeply ‘social’ in its character, which practically believes in ‘Atithi Devo Bhava’(the guest is god) gestures, where social and religious gatherings are a part of daily life, where people speaks over 720 different dialects and follow hundreds of different customs. The results of India’s Janta curfew (a curfew imposed for the people, by the people, on the people themselves) are a big hope and relief for humanity at this crucial juncture. Every single moment of ‘Janta Curfew’ was motivating at many levels when over a billion voices cheered together for the doctors, nurses, hospital staff, sanitation workers, airline employees, government staff, police personnel and other fellow citizens who are at the forefront of fighting this crucial battle. It may be surprising to many that instead of getting panicked, the people of India (a country which tops the list of Coronavirus vulnerability) are more prepared to face the challenges as they come and this is the greatest achievement of Narendra Modi as a leader.

There can be some differences in the severity, scale, and damages so far but leaders across the world are agreed on a single point that Coronavirus pandemic will be as devastating in its impact as World Wars I and II. India has identified from the very beginning that in this war-like situation ‘Prepare, but don’t panic’ mantra and Collective Efforts are going to help.

Within two and a half months, India moved from one major facility for pan-India testing to 113 government and 47 private testing labs and also issued guidelines for capping the cost of sample testing by the private labs. In parallel to that, it has ramped up the entire health care system by increasing the training of medical staff and diagnostic capabilities across the country. According to the recent updates by the health ministry, today India has a capacity of conducting 10000 tests in a day and 60000-70000 tests in a week which can further scale up with the help of the private labs such as MyLab Laboratories, which are massively ramping up the production of COVID-19 test kits.

The concept of ‘Social Distancing’ has emerged as one of the most recommended approaches to deal with the Coronavirus pandemic. But this is a unique situation that demands physical social distancing and moral social cooperation at the same time. At the very beginning of his term, PM Modi coined the mantra of ‘Sabka Sath, Sabka Vikas’ (Collective Efforts, Inclusive Growth) for the transformation of the country, which later becomes the guiding principle of every policy of the government, from domestic to international affairs. It is the principle of ‘Collective Efforts’ which inspired the idea of holding a meeting of SAARC nations too. In his concluding remarks (through video conferencing) Modi had said: “it is clear that we have to work together. We can respond best by- coming together not growing apart, collaboration not confusion, and preparation not panic.” The meeting received an overwhelming response from all SAARC nations and as an outcome a COVID-19 Emergency Fund was set up, which India initiated with $10 million contributions and later all SAARC members have made significant contributions from their sides. Apart from the emergency fund, the SAARC Disaster Management Centre set up a website on COVID-19 for shared use and mechanisms have been set up for the regular interaction between the senior health professionals of SAARC countries for exchanging their experiences and planning for practical joint actions.

It is often said that the time of crisis is a test for the character of an individual, society, and nation. Lockdown is not a normal thing for a country, which is almost equal to the size of a continent and which is passing through its ambitious development phase. Despite some setbacks, India’s economy is in a better position to overcome this challenging time and credit for this goes to the basic character of the Indian society. Whenever a crisis occurs, the highly diversified society of India tends to exhibit its elements of unity and everyone cooperates like the members of one large family. In India, a government does not need to pass the orders to tell the common people to feed and facilitate the poor and to arrange for the basic needs of the deprived in the society, it is an integral part of Indian’s moral and social obligations.

Scenes of people fighting over grocery items in shopping malls in some wealthy western countries are very common these days but in India, the situation is completely different. Within a few days of the announcement of the lockdown, several community kitchens and shelters have been rolled out by the common people and social groups in the country and many have decided to continue their volunteer services till any further notice from the government. Common people are distributing the self-prepared kits of one-month grocery items to the poor around them, taking care of the police and security agencies deployed in their societies, and many people are offering their private places as a quarantine facility to the government. And these all are the self-motivated efforts of the individuals.

On 28th March, Prime Minister Narendra Modi announced the PM-CARES fund (Prime Minister’s Citizen Assistance and Relief in Emergency Situations Fund) and asked the people to make donations for combating, containment and relief efforts against coronavirus outbreak. Immediately after this announcement, from millions of common people to businessmen to celebrities to politicians to social services and religious groups, everyone came forward and made generous donations from their sides. Some of the noteworthy donations are from Tata groups ($210 million), Azim Premji Foundation and Wipro (US$160 million) and Reliance Industries Ltd (US$70 million).

In India, the culture of giving back to society is not limited to businesses; the religious groups are also a partner in it. Several Hindu temples across the country, irrespective of their size, are helping the government agencies in whatever possible ways they can. The temples have closed the doors for the worshippers but initiated many parallel welfare services for the societies- from distributing food to medical emergency help. Many temples have opened up their complexes to the local governments for setting up quarantine and isolation facilities and are donating the huge sum of money in their state government’s relief funds too.

One person’s act inspires the other and this is how the cycle of ‘Collective Efforts’ is progressing in India at this tough time of crisis.

The external threat makes the societies to recognize their hidden abilities. Working in cooperation and harmony with each other (and with the entire world) are some of the basic characteristics of Indian society. The idea of ‘Collective Efforts’ which is helping a country of 1.3 billion people to overcome the Corona Crisis has the potential to lift the spirit of humanity at this crucial juncture.

While there are countries like China that are determined to negate the idea of humanity itself, there is hope too and today, India is leading that hope.