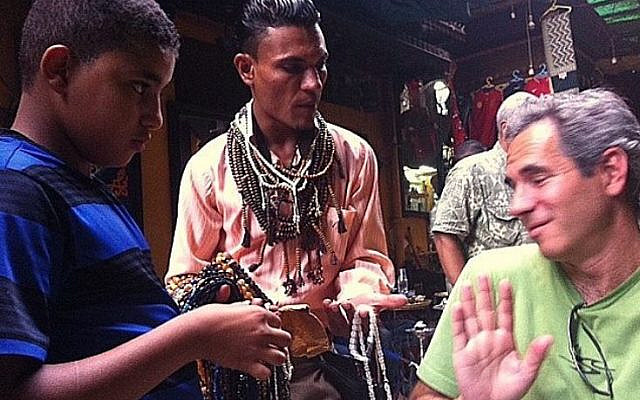 Free markets may not be great for everyone (Dan Perry photo)

Looking for a silver lining? The corona crisis at least makes one thing more clear: there is an important role for government. When everything turns to dust, it is the government to which we turn, hat in hand and hoping for the best.

My parents, escapees from communist Romania, had a healthy distrust of government. Where they came from it was an enemy most foul; fascists, communists, all of them were swine. I inherited this instinct and as a youth in America would claim to be libertarian and advise anyone who would listen that the state should “stay out of our face.’ Youth loves categorical statements.

That was in tune with the times. Ronald Reagan was disdained by the smart set but he did get some love for declaring that “the most terrifying words” in the English language are “I’m from the government and I’m here to help.” I liked the quip but now can see that it’s not exactly true.

There is a miserable world awaiting all of us out there. English philosopher Thomas Hobbes believed humans are selfish and infinitely competitive, and morality and ethics have no role. Civilization is a word for rising above this misery. The closer you get to laissez-faire economics promoted by the likes of US economist Milton Friedman, the less you accomplish that.

In the United States, FDR ended the Great Depression partly by harnessing the power of the state (though World War II also helped). Yet even that could not weaken the widely held conviction that the “Invisible Hand”  would generate a rising tide that lifts all boats. And often it does: capitalism, which has been let to run wild in much of the West in the past 40 years, has lifted billions out of poverty, increased home ownership and brought the world closer.

But things now seem to be flying apart. Corona has caused a tremendous slump, but it also arrived at a time when one seemed about to happen anyway. Here’s a look at what ails us:

Inequality: The UN found recently that it’s getting worse for 70% of the world population. This comes from tech innovations that concentrate wealth with those who invented and built first, or from corruption and predatory states, but also from laissez-faire liberalization (in the US, UK, pockets of continental Europe and dots all over the map from Israel to Japan). A tiny few own and earn a bigger piece of the pie than ever in the modern era, and while that’s just capitalism it’s also simply driving people nuts.

Labor: Unions can crush an industry, like US car companies, leaving workers unemployed, broke and unable to consume – but they also create wealthier workers to buy everybody’s products. The pendulum swing between capital (making money from existing riches) and labor (making money by selling work) has been going on for a thousand years; but now, with the gig economy and no pensions or steady careers, it has swung decisively toward capital, pleasing the free marketeers but sending inequality through the roof. A revival of organized labor might help, but standing in the way is …

… Automation: Technology displaces human labor, and that’s efficient and it’s very free-market. We have been taught to accept that it may drive people out of work but also releases them to do better jobs that don’t yet exist. It worked out that way before (peasants became factory workers who gave way to journalists) even if it took generations to play out. But automation can also succeed too well: if it replaces everyone there will be a depressed market for products created by the robots.  The free market is on the verge of automating away the usefulness of most people, and they will need a better plan and demand it of the government. Depending on the answer this could lead to “mass aristocracy” (some of whose members might use their leisure to do great things in art and science) – or revolution.

Moral hazard: This wonderfully absurd term means taking risks whose downside you think others will cover. One version of it has been the scam whereby bankers lend to insolvent people and happily collect interest on loans they expect the government to cover in case of mass default (which is not too free-market). Corona has actually reversed this, and now governments all over are encouraging banks to hand out easy money to ease the desperate times. Either way the government is on the hook, as banks collapsing cannot be allowed since that would cause panic in stock markets, which brings us to …

… Equities: Companies need the stock market for raising capital and it’s been a good form of investment for ordinary people and a pillar of the capitalist system. It’s great that we participate in the Dow’s rising tide, but no one wants to go down with the ship (which is capitalism too). The stock market collapse was bad in 1929, but most people were not invested in it. That now so many are means that many are fretting less about COVID-19 than about the evaporation of their 401(k)s.

Globalization: Sure, each country contributes what it can. Emerging markets offer cheap labor and take over most manufacturing – but what if it’s slave or child labor, or if it results in massive unemployment in the West? What if democracies become dependent on the whims of despots? We might ask the people: Maybe you’d rather pay double for your iPhones? In time the issue goes away, because labor typically doesn’t stay cheap. But for now, the sacrificing of jobs at the alter of globalized free markets is part of the appeal of Donald Trump.

While this circus plays out, the young all over the world are having doubts about capitalism, because almost none of them will ever have a steady job or a pension. That has been the verdict of the capitalist free market, and it is driving them to the fringes of the left. Preventing that has been one of the justifications for social democracy: to temper the ills of capitalism in order to preserve it and deny support to communism.

America in particular has had a tough time grasping this, due to its ethic of rugged individualism. That’s how this amazingly rich country ends up being the last developed nation to not have a baseline of universal health insurance, which on top of outrageous medical costs created by a for-profit system means a trip to the doctor could mean ruin for a family. Its also why the US government won’t stop lunatics from purchasing guns and shooting up schools.

The corona crisis might focus minds on the foolishness of this.

After all, it is massive state handouts that are keeping the stock markets from total collapse. It is governments that are expected to care for the masses of newly unemployed and are calling the shots on prevention measures.  Right now it is European governments that (unlike in the US) are keeping people out of unemployment by guaranteeing salaries to a point. Good luck getting the free market to do any of this.

People may be reminded that you cannot assume the free market will manage a national crisis, take care of the fringes of society, or give you highways, hospitals, secure borders or schools. Yes, it might remind even Americans that social democracy is a very good thing.