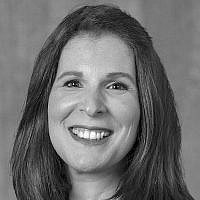 The Blogs
Jodie Cohen
Political consultant, commentator & author, 'Tikkun Olam: Israel vs COVID-19'
Apply for a Blog
Please note that the posts on The Blogs are contributed by third parties. The opinions, facts and any media content in them are presented solely by the authors, and neither The Times of Israel nor its partners assume any responsibility for them. Please contact us in case of abuse. In case of abuse,
Report this post. 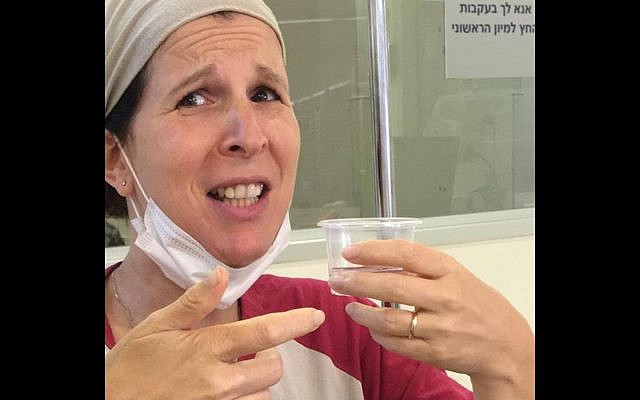 So there I was feeling absolutely fine one minute, and doubled over in pain the next. After an agonizing night, with the pain spreading from my abdomen to my back, I ended up in hospital with suspected acute pancreatitis. The medical staff at Meir Hospital were amazing, and quickly got my pain under control.

This is when it got interesting. Between tests, I had a lot of waiting around time in the Emergency Room. About eight times when I was there, we would hear calls of ‘corona’ and the ambulance staff (decked out like space cadets) would clear part of the waiting area. Everyone watched as the poor souls were wheeled through, accompanied by oxygen and no doubt people’s heartfelt prayers.

I was released from hospital and told to rest for five days. After sleeping the better part of the next 48 hours, and going for follow up tests, I began to feel what can only be described as corona symptoms – a stomach-ache, headache and temperature that came and went, and a really awful sore throat, that felt more like a huge swelling in my neck.

At the same time, we found out that my son had been exposed to corona at camp and had to go into isolation…and I was promptly sent for a corona test. Having written a book about corona during the second month of lockdown, it was surreal to actually experience the process of going to a drive-in testing center, having the unpleasant test done on myself, and then the anxious wait for the results. (NB After having the back-of-the-nose test, I am particularly relieved to hear that a new gargle test is under development!)

Thankfully, the test came back negative, but the whole experience made me appreciate even more the tremendous efforts being taken to find solutions to tackle the coronavirus. And since my hospital visit, there’s been more good news from some of the innovations featured in the book to help fight the pandemic…

The ‘Maya’ sticker has announced progress, developed under the leadership of Professor Eyal Zussman of the Faculty of Mechanical Engineering at the Technion, and under the clinical guidance of Professor Samer Srouji, the director of the Maxillofacial Surgery Department at the Galilee Medical Center (GMC) in Nahariya. The sticker, containing nanofibers with antiseptic, is simply stuck onto a surgical face mask, and testing at the GMC has indicated that it adds extra protection against the coronavirus.

It has now been announced that the sticker is moving to mass production to help improve protection for both medical teams and members of the public. Maya is expected to be approved by authorities in the US and Europe soon, with exclusive agreements being made to export the sticker to other countries, such as Canada, Japan and Spain.

In addition, Israeli biotech company, Pluristem Therapeutics Ltd, has seen promising progress in its use of placenta therapy on patients in Israel and the US, who were all at severe risk of dying. The company has announced a new Phase II study that is taking place in Germany, in addition to its study in the US, and the therapy’s use in Israeli and American compassionate use programs.

Pluristem has also signed a landmark agreement with the leading research center in the UAE, the Abu Dhabi Stem Cells Center (ADSCC). One of the first agreements signed between Israel and the Emirates, this collaboration will harness both organizations’ areas of expertise for the benefit of Israelis, Emeratis and the world.

Another treatment causing a stir is Kamada Ltd’s Hyperimmune IgG Therapy for coronavirus disease for compassionate use treatment in Israel. Towards the end of June, Kamada believed it was the first company in the world to complete the manufacturing of a coronavirus drug from antibodies from people who have had COVID-19. Now it believes it has achieved another world first, becoming the first company to clinically test such a product.

The potential treatment is being assessed at Hadassah Hospital in Jerusalem, and three people have already recovered and been released from hospital, astonishing doctors only three days after receiving the drug. According to Kamada’s CEO, Amir London, the treatment is currently being tested on coronavirus patients, and will also be tested to evaluate possible effectiveness in preventing people from getting COVID-19.

Thankfully, my story ended well, but for too many people that isn’t the case. However, despite the still high numbers of corona around the world, these latest announcements suggest that there is cause for optimism.

You can find out more about the Maya sticker, Pluristem and Kamada in ‘Tikkun Olam: Israel vs COVID-19’, available on Amazon and at other online and retail stores around the world.

About the Author
Jodie Cohen is an award-winning public affairs consultant and TV political commentator. She is the author of 'Tikkun Olam: Israel vs COVID-19', which features over 30 innovations developed during the two months of lockdown in Israel. A proud British Israeli, she is also slightly obsessed with India!
Related Topics
Related Posts
Comments