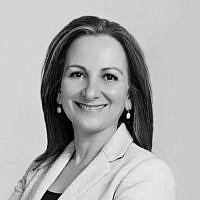 The Blogs
Jacqueline Saper
Apply for a Blog
Please note that the posts on The Blogs are contributed by third parties. The opinions, facts and any media content in them are presented solely by the authors, and neither The Times of Israel nor its partners assume any responsibility for them. Please contact us in case of abuse. In case of abuse,
Report this post.

Coronavirus has become a global epidemic, forcing world leaders to deal with the health, economic, and psychological fallout. In Iran, though, the coronavirus is just another disaster dropped upon an already-traumatized citizenry and exacerbated by a misguided government.

Last November, protestors took to the streets to object to a sudden increase in gasoline prices, and to show their discontent with inflation, unemployment, and corruption. In response, Iranian security forces fatally shot an estimated 1,500 people and detained many more. 2020 then began, literally, with the force of a deluge. Heavy rains and flash flooding In January resulted in fatalities and widespread destruction. A few days later, General Qasem Soleimani, viewed by many as Iran’s second-most powerful person, was killed by an American airstrike in Iraq. Then came Iran’s response to Soleimani killing: it shot down a passenger jet, Ukraine International Airlines flight 752, with 176 people aboard as it took off from Tehran Imam Khomeini Airport. The strike, apparently, was an accident — the result of an itchy trigger finger in a warlike atmosphere. 146 Iranians or dual national Iranians are among the dead.

By mid-February, coronavirus reared its head. Quickly, it spread at an exponential rate. And equally quickly, the threat was downplayed by Iran’s leaders. February is the “Ten-Day of Dawn’s” celebration where people are encouraged to flock to the streets to commemorate the return of Ayatollah Ruhollah Khomeini to Iran in 1979 after fifteen years in exile. Iran’s parliamentary elections were also due to take place in February. Government leaders wanted high voter turnout and the support expected to come with it. So the virus was not acted upon with urgency.

Yet another factor playing into the Iranian government’s harmful decision making was a desire to maintain peoples’ pilgrimages to the holy city of Qom, a city 90 miles south of Tehran. Qom houses the sacred Shrine of Fatima Masoumeh, among other shrines and mosques. Proposals for quarantines were repudiated by Iran’s vocal and plentiful religious zealots who believe the shrines have extraordinary healing power. Sure enough, Iran’s first detection of COVID-19 was in Qom, and as pilgriming visitors returned to their respective homes, they spread the virus throughout the country and beyond its borders.

Even once the outbreak took hold of Iran, the nation’s ruling establishment used the crisis to emphasize its priorities of religion, anti-American propaganda, and an unbending anti-Israel stance. Supreme Leader Ali Khamenei rejected America’s offer of humanitarian assistance, instead emphasizing Iran’s self-reliance in fighting coronavirus. Based on this same philosophy, the Iranian Health Ministry rejected an offer from Doctors Without Borders to establish an intensive care field hospital in the hard-hit city of Isfahan.

Iran has highly skilled medical professionals. It also has some equipment. On April 18, the country marked Army Day with a parade of uniformed soldiers in masks and gloves riding on disinfection vehicles, and by displaying a range of medical equipment. But it has failed to fully leverage these assets. Instead, it has muted their effect by prioritizing religion in its approach to coronavirus. Clerics continue to suggest an array of non-medical remedies such as reciting verses while smelling rosewater and consuming oils. Any combination of religion and medicine must be one in which the dual approaches complement one another. What we’re seeing in Iran is a minimization of science and medicine.

And of course, there’s propaganda. Iran has made a bogus claim, declaring that it’s invented smart system equipment that can instantly identify coronavirus in the environment by creating a magnetic field. Misinformation, misplaced priorities and missed opportunities to access international aid are compounding Iran’s sickness and suffering.

The people of Iran have lost trust in their government’s manipulated statistics of positive cases and the dead. Iranian authorities are dealing with this deadly and invisible plague with an utter lack of transparency. Same as ever, a regime founded on lies continues to rule on shaky grounds. The Iranian people continue to suffer the consequences.

Jacqueline Saper is the author of a memoir, “From Miniskirt to Hijab: A Girl in Revolutionary Iran.” (Potomac Books – University of Nebraska Press). jacquelinesaper.com

About the Author
Jacqueline is a Jewish Iranian-American and was born in Iran and lived there for 26 years. She witnessed the 1979 revolution and continued to live in the Islamic republic for eight years after the revolution during its most volatile times as well as the Iran-Iraq War. She left (fled) Iran and moved to America in 1987 with her husband and two small children. Jacqueline is fluent in English and Farsi.
Related Topics
Related Posts
Comments