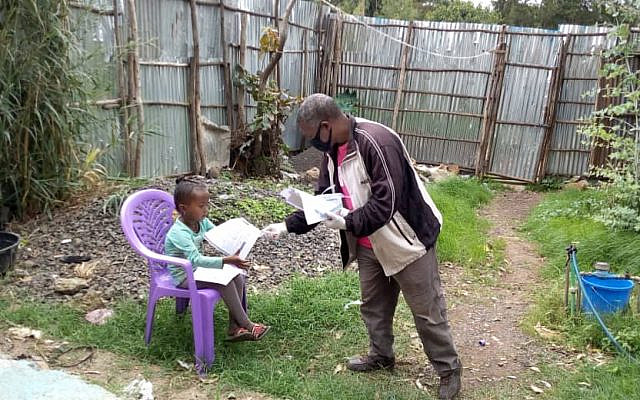 On July 23, another 34 Ethiopian Jews were reunified with their families in Israel. The airlift, sanctioned by the government of Israel, couldn’t have come at a better time.

The Jewish communities of Gondar and Addis Ababa Ethiopia, like many small enclaves across Africa were hit particularly hard by the domino effect of the pandemic. The government closure of stores and services in an effort to blunt the spread of the virus meant not only that people couldn’t go to work or operate their small businesses, but that they suddenly couldn’t buy food.

Israel’s decision to restart the airlifts from Ethiopia at this time is a welcome relief to many in Israel who have been waiting for the arrival of their loved ones. But it’s also a bold step that may in the end, help lessen the strain on those still awaiting aliyah, and the aid groups that have been working constantly to stave off a wider crisis.

In Gondar, the Ethiopian government’s shutdown of services created an abrupt halt to many of the small businesses that were owned by Jewish residents. Those small bakeries, cafes and other services were created in many cases, through a partnership effort led by the nonprofit organization Meketa, affiliated organizations and agencies, and local Jewish residents.

Microloans, arranged with the nonprofits’ help and managed through the city became the lifeline for new enterprises that in turn, kept families afloat while they waited for aliyah. The country-wide shutdown temporarily stripped families of the ability to work, pay those loan payments and buy store-bought food. In recent months, donations raised by Meketa became the new lifeline to ensuring there was enough grain for the community during the pandemic.

In Addis Ababa, several networks of volunteers have been working to both ensure that there is enough food available and to bolster protection against COVID-19 for the community’s elderly members.

The organization, Struggle to Save Ethiopian Jewry has been a much needed driver to getting medical care, food and other support for Addis Ababa’s Jewish residents. But as in Gondar, much of the community has been dependent on donated food since the pandemic started.

In both areas, poverty is rampant and basic amenities that we count on in Israel and the western world are often nonexistent. According to one volunteer I spoke with, many of Gondar’s community members have been forced to move further outside of the city in order to find affordable housing. But moving into the rural, undeveloped areas often means doing without electricity and running water and closer access to medical services – the same amenities that we rely upon when it comes to staying safe from the coronavirus. And like the Addis Ababa community, Gondar’s Jewish residents also have a harder time qualifying for government assistance, than their Christian neighbours.

These challenges aren’t recent developments for the Ethiopian Jewish community, though. Nor are they unknown to the Jewish Agency and the many advocates in Israel that support the airlifts. But at this point, the only thing worse than living in abject poverty beyond the reach of city services is living in fear of a pandemic inside the city. Thankfully, living beyond municipal limits means they are all the farther from current outbreaks. But for how long?

Israel has often been a beacon for humanitarian justice, and its ongoing support of Ethiopian Jewry is no exception. Its earlier airlifts have been nothing short of historic in their ability to save lives when it really counted. Now is the time for Israel to again, speed up the airlifts and bring Israel’s children home.

About the Author
Jan Lee's articles on Jewish culture and history have been published in B'nai B'rith Magazine, The Jewish Independent (Vancouver, BC Canada), DailyRabbi.com and Voices of Conservative and Masorti Judaism; She is also a regular contributor to the business and ecology publication TriplePundit.com, where she writes on sustainable business practices throughout the world.
Related Topics
Related Posts
Comments