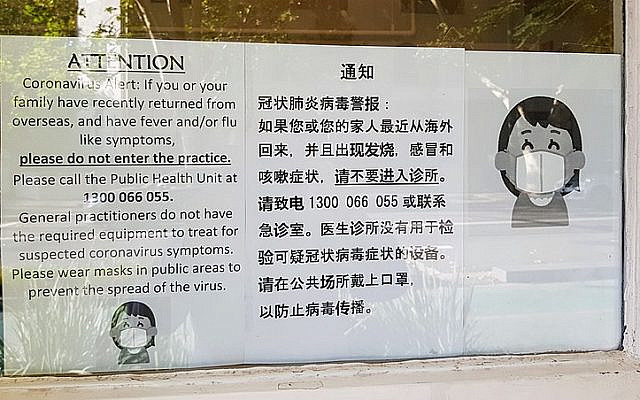 Warning outside medical centre in Sydney due to outbreak of coronavirus (Source: Wiki Commons)

We all see a calamity unfolding before us and we are all afraid. Some call it an epidemic, others a pandemic. It is a panic-demic.

The travel industry is collapsing, schools and universities are closing, there are ghost towns everywhere, life is in lockdown.

The first instinct of some people is to find a scapegoat. Iran is characteristically blaming it on America. Westerners think Asiatics are the ones who are guilty. What ridiculous prejudices!

It must be God punishing a sinful generation! That was the approach of Job’s friends: “Is not your wickedness great? Are not your iniquities without end?” (Job 22:5).

That’s God’s policemen speaking – and their thinking is skewed.

Why the virus started is a complicated issue. There are many constellations behind the history of COVID-19. Even climatic factors might be involved since this is all happening in a between-seasons period. We can’t cast blame unless we have the information to back it up and even then we have to recognize that it is not a mere academic issue; real people are suffering real pain. Facile stereotypes won’t make anyone feel better.

What we need is a response.

Here are six things to do: