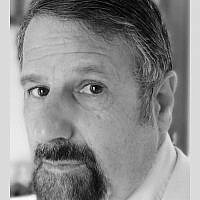 The Blogs
Michael Partem
Apply for a Blog
Advertisement
Please note that the posts on The Blogs are contributed by third parties. The opinions, facts and any media content in them are presented solely by the authors, and neither The Times of Israel nor its partners assume any responsibility for them. Please contact us in case of abuse. In case of abuse,
Report this post.

The monumental challenge we face as a nation in battling the coronavirus demands the full, dispassionate, and uncorrupted attention of our leadership. At a time when Israelis are asked to stay off the streets and voluntarily give up basic freedoms, trust in government is critical. Instead, we are being led by Benjamin Netanyahu, a criminal defendant by day and an overreaching caretaker prime minister by night.

At a time when citizens look for guidance, what a shame that the government’s voice is filtered through a leader whose motives are so questionable. Witness the prime minister’s daily appearances on prime time news. Netanyahu merits praise for using the platform to deliver clear instructions on dealing with the pandemic. Unfortunately, he has also turned it into a vehicle for self-promotion, for distracting citizens from his corruption trial, and for manipulation of the process of selecting the next governing coalition.

Just three weeks ago, our non-profit group, which has over 50,000 members, set up a protest tent across the street from Israel’s presidential residence in Jerusalem. The plain message: no individual who has been indicted by the state with serious charges of bribery and fraud can be entrusted with the task of forming a new government. As a defendant, Mr. Netanyahu should not be a candidate for the role of prime minister under these circumstances.

Benny Gantz has the opportunity to become Israel’s next prime minister by assembling a coalition. He may or may not succeed. He faces intense pressure to form a national unity government in partnership with the Likud party. Until now, Gantz has upheld the principle that anyone indicted for corruption should not be prime minister, but he is showing signs of willingness to bend. That would be unfortunate. The rule of law is too high a price to pay for a ceasefire between the largest political parties. If Blue and White agrees to Mr. Netanyahu remaining in office, we will most certainly file a petition to the Supreme Court against the appointment.

It’s ironic to recall that, in 2008, when we took the lead in supporting efforts to investigate and prosecute then-prime minister Ehud Olmert, Mr. Netanyahu was head of the opposition at the time, was outspoken on the principle that a prime minister under indictment must resign. “There is a suspicion,” he said, that Olmert “will make decisions on the basis of his personal interest of political survival and not the national interest.” Truer words were never spoken.

Olmert resigned when the attorney general decided to indict him for acts of corruption – despite his significant contributions to the State of Israel. Netanyahu, in contrast, has sought to discredit the attorney general that he himself appointed, Avichai Mandelblit, while also trying to undermine the state prosecutor and the police. This behavior is shameful and only shows that Mr. Netanyahu is not fit to lead the country.

Israel is a parliamentary, not presidential, democracy. No one person receives the vote. Each and every ballot was cast for one of the dozen or so political parties. The parties select and can replace their leadership. The Movement for Quality Government does not take a stand on which party should lead the government; we simply maintain that the government should not be led by a politician indicted on charges of corruption.

We cannot allow these stressful times to be an excuse to compromise on our most fundamental democratic norms. The rule of law, transparency, and open debate are all principles that serve us well. In periods of great national emergency, our allegiance to these values is actually an advantage. It is no coincidence that this latest pandemic germinated and blossomed in China, an environment where the disinfecting light of free speech and openness does not penetrate.

For now, the coronavirus has forced our movement to dismantle its protest tent across from the President’s Residence, but the campaign against Mr. Netanyahu’s getting a fresh term as prime minister continues. Israel’s new government should not be headed by someone under indictment for bribery and other high crimes.

About the Author
Michael Partem is an attorney in private practice and vice-chairman of the Movement for Quality Government in Israel.
Related Topics
Related Posts
Michael Partem
Comments