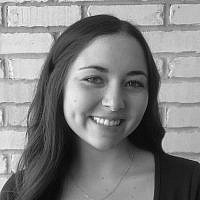 The Blogs
Kate Hertz
Apply for a Blog
Please note that the posts on The Blogs are contributed by third parties. The opinions, facts and any media content in them are presented solely by the authors, and neither The Times of Israel nor its partners assume any responsibility for them. Please contact us in case of abuse. In case of abuse,
Report this post. 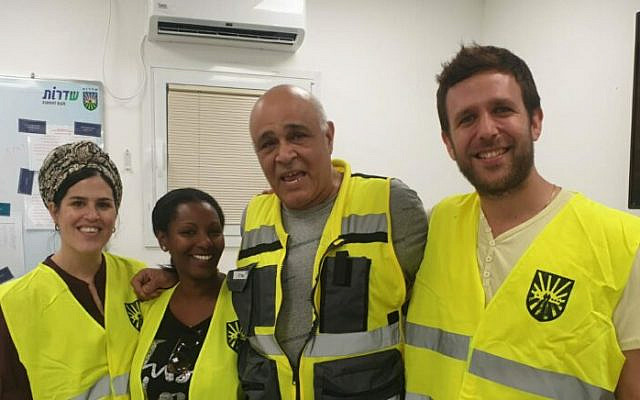 Our Own Way counselors.
Located approximately one mile outside of Gaza, Sderot has become known as the “bomb-shelter capital” with everything from bus stops to playgrounds doubling as bomb-shelters to protect residents from Qassam rockets. Alarms sound 15 seconds before a rocket hits the city, forcing people to live in constant fear of needing to sprint to safety in just 15 seconds.
“Right now, the people are mostly inside their houses… this time it really feels for everyone a bit different. Hamas throwing the missiles have left a lot of more people dead,” Gonen Harel of JOIN Israel’s Our Own Way Project said.
The non-profit organization’s project helps at-risk teens and families in Sderot by providing counseling to encourage engagement, self-expression and positive identity.
Harel is a counselor for Our Own Way, making him a first-hand witness to the current violence in Sderot.
“Every person reacts differently. There are people who are angry, there are people who are shocked… some of them deal with it with humor… It’s really tough,” Harel said. “There’s no person that’s not affected by the situation.”
With people largely remaining in their homes, children have not gone to school, some families are without a sufficient food supply, and many people are feeling alone. Life in the city of Sderot has become stressful and, for many people, traumatic.
“Not all of the kids in Sderot have PTSD but it does happen to a lot of them. A lot of people have problems with breathing or with their stomach… there’s someone that has back pain or someone that finds it difficult to concentrate. Everyone is in stress and you feel that stress in your body,” Harel said.
Growing up in the “bomb-shelter capital” means the constant threat of violence, and, according to Harel, you can never really get used to this way of life.
“People know how it is with the missiles here and that’s for the good and for the bad,” Harel said. “In the good parts, yes we know how to deal with it… It’s for the bad because it’s not just a few days now that are hard, it’s 20 years. It’s like a wound that doesn’t heal”
With tensions high in Sderot, JOIN Israel’s Our Own Way Project is providing support to hundreds of people who are struggling in the area. Despite the dangerous circumstances, Our Own Way counselors, like Harel, go into the neighborhoods and help in any way that they can. The counselors build relationships, create a sense of connection within the community, and help people get the treatment that they need for conditions such as PTSD.
“You can’t fix all of the problems but [feeling] a bit less alone… it really makes a difference… It’s so important to even just ask ‘How are you? How do you feel?’” Harel said. “It’s not safe just walking outside… each one of us [counselors] makes the decision every morning to say goodbye to our family and go and be in the neighborhoods.”
The Our Own Way Project in Sderot has created groups within the community so that they can speak to each other via WhatsApp, or meet together in person to feel a sense of belonging. This type of connection is especially important recently, as Sderot mourns the loss of 5-year-old Ido Avigal. Avigal was inside a fortified room in his Sderot apartment when he was tragically killed by a piece of shrapnel from a rocket.
The building where Avigal lived is home to an Our Own Way group. In this time, the group has been meeting up to provide support to each other. Following Avigal’s passing, Gonen Harel and other Our Own Way counselors visited the families of his building, including the woman who had been Avigal’s nanny.
“She really was in shock… but her daughter said ‘you see this, Arabs and Jews can’t live together anymore’” Harel explained. “The nanny said ‘don’t talk like that, we need to believe that there will be peace.’”
Our Own Way is a critical project that helps the people of Sderot hold on to this hopeful thinking. It connects people to one another, so that they do not feel completely isolated.
“All of the past times that there were missiles in Sderot, it’s really hard to feel like you’re part of Israel, part of the Jewish people,” Harel said. “When people show you empathy and show that they don’t just continue on with their lives… the support really strengthens me to feeling that [the project] is not just a thought in my head, but it’s a mission and a lot of people are behind me,” Harel said.
Our Own Way has been able to provide support that the people of Sderot need in order to stay a connected community during such difficult times.
“It can feel like it’s the end of the world and it is really depressing but we need to find a place for hope. The hope is the connection between us,” Harel said.
About the Author
Kate Hertz is a rising junior at the University of Wisconsin-Madison. She is studying Journalism and Political Science, and her passions include both writing and social justice.
Related Topics
Related Posts
Comments