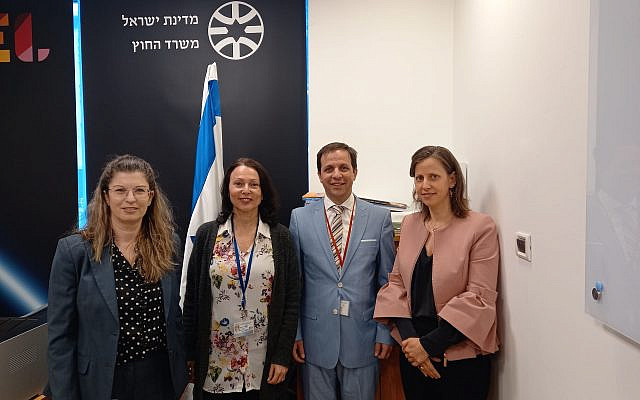 On April 13, 2022, the Ministry of Foreign Affairs of Israel invited the delegate of the University for Peace (UPEACE) established by the United Nations General Assembly to visit Jerusalem. This was part of the first ever mission of UPEACE to the Middle East, including Palestine. The excellent cooperation with Ambassador Aviva Raz Shechter, the Special Envoy for Women, Peace and Security of Israel and the support received by the Permanent Mission of Israel to the United Nations in Geneva made of this mission an unprecedented success.

High representatives of the Ministry of Foreign Affairs, the Peres Center for Peace & Innovation and some academics specialized on women’s rights, identified with the UPEACE delegate some possible joint programs for the new Israeli diplomats taking into account the women’s approach and the education for peace. Additionally, good practices about the enjoyment of peace and security were also shared by the governmental representatives. The future tailored training programs will provide the Israeli diplomats with the knowledge and skills needed to engage in contexts related to peacebuilding and regional dialogue.

This initiative led by the Ministry of Foreign Affairs of Israel in cooperation with UPEACE in Geneva is an example to be underlined in today’s commemoration of the International Day for Countering Hate Speech, which was declared by the United Nations General Assembly in its resolution on “promoting inter-religious and intercultural dialogue and tolerance in countering hate speech” in 2021. Consequently, the forthcoming trainings will provide the Israeli diplomats with the necessary tools to counter discrimination, xenophobia and hate speech at the national, regional and multilateral level.

On such a day against Hate Speech, it should be emphasized that the manifestations of intolerance based on religion or belief are unfortunately dramatically increasing. In fact, 2021 was the worse year for antisemitic attacks in a decade, seeing an average of ten incidents per day with the likelihood of many more incidents. Consequently, combating hate speech and antisemitism should be a priority for all governments. Incitement to violence and hatred against Jews, Muslims or Christians cannot be erased easily and cannot be justified nor legitimated by freedom of expression.

In line of the “Plan of Action to Prevent Violent Extremism” elaborated by the United Nations Secretary-General in 2015, it should be underlined that preserving the values of multilateralism and international cooperation, which underpin the UN Charter and the 2030 Agenda for Sustainable Development, is fundamental to promote and support the three pillars of the UN – peace and security, development and human rights.

Since that peoples of all nations from ancient times have recognized the status of diplomats as agents of peace, the future cooperation between Israel and UPEACE will stress the importance of the use of multilateral decision-making and diplomacy in achieving peaceful resolutions to conflicts among nations. This cooperation will emphasize the importance of respect for religious and cultural diversity, as well as inter-religious, interfaith and intercultural dialogue aimed at promoting a culture of tolerance and respect among individuals, societies and nations.

About the Author
Dr. David Fernández Puyana was born in Spain and is a practitioner and international lawyer specialized in international human rights law, international relations, peace studies, United Nations and civil society movements. He earned a Phd with European Mention and he has also a Degree on Law & Philosophy, as well as, some Masters on Human Rights (Essex, Alcala de Henares and Barcelona Universities). He served as adviser at the UNESCO Liaison Office and the Permanent Mission of Costa Rica to the UN in Geneva. As a legal assistant of the Chairperson-Rapporteur of the UN Intergovernmental Working Group on the right to peace, he was one of the architects of the Declaration on the Right to Peace adopted by the UN General Assembly in 2016. He advises Paz sin Fronteras and is Professor of Public International Law at Abat Oliba University CEU. Since June 2018, he serves as Ambassador and Permanent Observer of the University for Peace established by the UN General Assembly to the UN and UNESCO. He is also nominated Gender Champion.
Related Topics
Related Posts
Comments