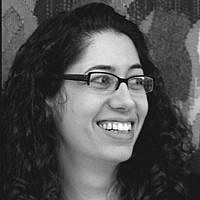 The Blogs
Jill Cozen-Harel
Apply for a Blog
Please note that the posts on The Blogs are contributed by third parties. The opinions, facts and any media content in them are presented solely by the authors, and neither The Times of Israel nor its partners assume any responsibility for them. Please contact us in case of abuse. In case of abuse,
Report this post.

We are taught that on Pesach, we left Pharaoh’s servitude, and on Shavuot, we stand at Sinai and experience God’s revelation as a free people.  Throughout the 49 days between the two, we count.  On the night of the second seder, the second night of Pesach, we count the first day of the Omer.  We count up, from day 1 to day 2, instead of counting down to a special event like a birthday or a wedding, when we would eventually reach day 0 – the event itself.  Each day, we add another to the count until 7 weeks have passed.  Until we can find a sense of meaning – not just the gratitude for freedom, but a God to whom we can offer that gratitude.

This year, I happened to attend two brit milah ceremonies during the omer.  Last night, as I got home from the most recent one, I realized that there might be a parallel between this beautiful new baby and the Jewish people on Shavuot.  One interpretation of why we welcome the baby into the convenant on the eighth day is that while seven days represent the week of creation and the full natural order, the eighth day is a step beyond that.  So once that child reaches his eighth day, he has surpassed the weekly cycle.  He is now ready to go beyond the natural world that was created during those seven days of creation in Bereshit and move to the holiness that our people found later.  What is that holiness?  It is a relationship with God, a covenant.  It is an infinite, undying connection that can transcend the span of a lifetime.  When Abraham circumcises Isaac in response to God’s instruction (Gen. 17:12), Isaac becomes our first ancestor to enter into the covenant on his eighth day of life.  On the first day of the first week of his life, his physical life is celebrated.  On the first day of the second week of his life, his spiritual life begins and is celebrated.

I wondered:  is the same physical creation/spiritual creation overlay that happens with a new baby at a brit milah also happening on a communal level with our ancestors who stood at Sinai?   Shavuot, fifty days after Pesach begins, has come to mark the time when we received God’s revelation, God’s commandments, and the brit between the Jewish people and God.  Could this moment have happened any earlier in time?  The Israelites who left Egypt weren’t until then.  Physically, they were free.  Spiritually, perhaps, they began to form when they witnessed the plagues or the splitting of the sea.   But they were still uncertain.  They were not sure of Moses and not sure of God.  They were so uncertain that they built the golden calf.  Their days is the wilderness were full of doubt and longing.  A single week of natural order would not have been enough for them, as it is for a new baby, unblemished by the evils of the world.  They would not be ready to accept a covenant with God – a relationship of obligation and responsibility – until they had lived through 7×7, or 7 squared.  Seven weeks, each of seven days, could finally cleanse them of the trauma that they experienced.  49 days could allow them to refresh and be open to a new kind of relationship – one that was not based on slavery.  They needed to wander 7 times the 7 day creation cycle so that they could be re-created.  On day 50, the first day of the 8th week of their physical freedom, the Israelites enter the first day of their spiritual freedom:  God reveals God’s self.  They enter the covenant collectively, just as the baby does.

This is an all-encompassing experience.  Franz Rosenzweig writes about Shavuot in The Star of Redemption and says “it knows almost nothing of anything outside of it; the before and the after of Revelation remain in the shadow; the people is completely engulfed in its solitude of two with its God.”  No matter what happened in the days leading up to Shavuot, leading up to revelation, everything else fades into the background when the day finally arrives.

The days of the Omer, like many days of the year, are not always easy for me in terms of my relationship with God.  Sometimes, it is a miracle to count one more day and survive with whatever strands of faith may remain from one day to the next.  On Shavuot, though, we stand still.  We do not create anything.  Instead, we listen, we hear, we feel, as we collectively bear witness to another kind of creation.  A revelation of God’s presence in our lives and our response to that presence.

I pray that we can find ways to be open enough to be created again and to hear God’s presence as if we were standing at the foot of the mountain.  As if, like the newborn, we are opening our eyes to see the world anew.

About the Author
Jill Cozen-Harel is a rabbi who lives in San Francisco. Among other things, she has worked as a chaplain and educator.
Related Topics
Related Posts
Comments