The Blogs
Malynnda Littky
Apply for a Blog
Please note that the posts on The Blogs are contributed by third parties. The opinions, facts and any media content in them are presented solely by the authors, and neither The Times of Israel nor its partners assume any responsibility for them. Please contact us in case of abuse. In case of abuse,
Report this post. 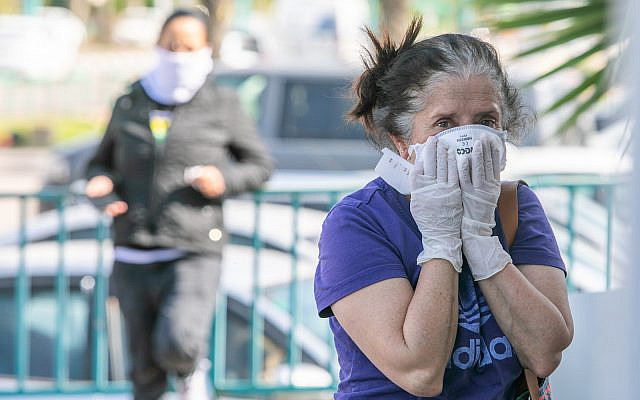 A woman wears a mask to protect her from the Coronavirus in Ramla, March 16, 2020. (Yossi Aloni/Flash90)

Around this time last year, I was in quarantine. I had the misfortune of attending the wrong party (or the right one, depending upon your perspective), and learned several days later that I had been exposed to measles. While waiting for my test results, I came across a documentary on Netflix called “Behind the Curve.”

No documentary had captured my interest quite as much as this one, at least until the release of this year’s Tiger King (I’m starting to wonder if Netflix has a bunch of “crazy” in reserve for times of global crisis). It followed a bunch of Flat Earth activists as they tried to explain how everything we had ever been taught about our planet, solar system, and by extension, our universe, was a lie.

This movie led me to watch days of YouTube videos about the topic. Rest assured, I never went directly to the channels that supported the theory. However, watching debunkers easily knock down Flat Earth talking points made me wonder how intelligent people (or people at least intelligent enough to record YouTube videos) turn into conspiracy nuts.

That was until yesterday.

COVID-19 has obviously forced us to adopt extreme changes in behavior. On a personal level, I’ve been quarantined, had the start of a new job postponed, and have had to delay finding an apartment. I’ve also spent an embarrassing amount of time on Facebook.

For the last several days, my feed has been full of calls for Israelis to wear masks when they go outside. Noting that WHO and the CDC weren’t recommending this step, I started reading up on why this might be the case. There seemed to be two major arguments: first, masks were in short supply, and second, they weren’t proven to offer significant protection.

Despite these reasons, a loud group of skeptics took to the internet, saying how WHO was collaborating with China, and could not be trusted. That the organization was simply trying to hide the shameful lack of medical supplies, despite masks being valuable protection. Common sense dictates that having something in front of your mouth blocking droplets had to be better than nothing, right?!

Oh, those adorable conspiracy theorists, at it again.

So, why don’t we use masks during the annual flu season? There hasn’t been a sustained mask shortage for the last decade, so that’s not why. And even if it were, if homemade masks work, as is being suggested, then why wouldn’t WHO have recommended them years ago?

Do we think WHO is pro-“death by respiratory illness”? That they would discourage people from making their own masks if it would save a significant fraction of the 99,000 to 200,000 people who die from complications of the flu each year?

But yesterday, Prime Minister (?… do we have a government yet?) Netanyahu reversed course, and said that we should all wear masks outside, and if none were available, we could make our own… or in the worst case, wear scarves.

Within hours, dozens of patterns for homemade masks were shared, and people began to complain about others they had seen outside without a mask on.

I pointed out that we shouldn’t be outside where we could be exposed to the virus in the first place, and if we needed to go outside, we were already supposed to stay at least two meters apart, which is beyond the range of the droplets that the masks were theoretically designed to suppress.

Plus, using masks improperly could lead to us touching our faces even more than usual as we try to get comfortable, meaning that a solution for a secondary method of spread could increase our risk of catching the disease through the most efficient means of transmission.

But the last straw for me was the Shufersal Facebook ad that tried to sell me tidy little mask kits. Since Shufersal is currently two to three weeks behind on online delivery orders, this sure seems like a ploy to entice people to come to the store, to buy things that are of relatively marginal use, and that would only be relevant for going to the store in the first place.

That’s when it hit me. The Israeli government should be ashamed of itself. Overnight, we’ve gone from a hardline message of “isolation, handwashing, and keeping our distance” to Facebook ads pushing masks we wouldn’t need if we followed the guidelines about hygiene, staying home, and staying separated.

When you go to Shufersal to get your masks in the morning, watch how closely people will be standing together waiting for their turn to enter the store. Watch how many times the person near you in the produce aisle touches something that’s potentially contaminated, and then absent-mindedly adjusts his mask without washing his hands.

We are exchanging the myth of control over COVID-19 for the certainty of decreased compliance. And I’m starting to wonder if this is a purposeful decision on the part of Netanyahu and the Health Ministry. I’m actually becoming a conspiracy theorist.

At this point, I don’t feel like Health Ministry directives are being made on the basis of science, which I prefer to use instead of “common sense.”

Remember, common sense is what tells us that the Earth is flat.