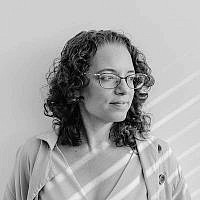 The Blogs
Anat Hinkis-Atzmon
Apply for a Blog
Please note that the posts on The Blogs are contributed by third parties. The opinions, facts and any media content in them are presented solely by the authors, and neither The Times of Israel nor its partners assume any responsibility for them. Please contact us in case of abuse. In case of abuse,
Report this post.

Every morning, while making the stipulated Israeli school meal of a sandwich, a sliced vegetable and a piece of fruit, I listen to the radio. Even during the year of on-again and off-again lockdown, I had tried to stick to this routine. Since the start of 2020, as Galai Tzahal presenters reported on the fast spread of the disease from China to the rest of the world, I became aware of how new terminology infiltrated the Hebrew language, and it made me think of all the other languages the virus was infecting while crossing the borders.

Some new in Hebrew terms seemed at first to be translated from English on the fly, but noticeably became more regulated within a few months, no doubt with the helpful nudge of The Academy of the Hebrew Language. But even in English speaking countries it took some time to single out a name for this unwelcome pandemic. The disease first appeared in December, but it was only in February 2020 that the World Health Organization changed the medical term 2019-nCoV to the catchier COVID-19 with ‘CO’ standing for ‘corona,’ ‘VI’ for ‘virus,’ ‘D’ for disease, and 19 for 2019. It’s a good name, sounding somewhat techie, befitting the 21st century (or maybe it just reminds me of R2D2 and 3CPO).

But in Israel, where even the prime minister and the president have nicknames, the short and simple ‘corona’ stuck. We don’t even enforce a distinction between the cause (coronavirus) and the disease (COVID-19), although I do occasionally hear news anchors switch to the more precise translation of the compound: negif corona. But it never caught on colloquially – I suppose we just like to keep it casual. And we do have permission to do so from the nation’s most recognized language authority, Avshalom Kor (may the nerds of today be the Avshalom Kors of tomorrow).

And yet, it’s amusing how small differences in terminology can cause a disconnect in communication. If I say ‘corona’ when speaking to relatives and friends in the US or the UK, there’s a pause on the other end of the line. It twangs in their ears. I can almost hear them blinking in confusion. I correct myself and wonder, will autocorrect speech ever be a thing? Actually, we all autocorrect instinctively when we talk to someone who is learning the language or says something that’s odd for our locality. We mentally fix it, or complete the grammatical gap.

But at times this autocorrect doesn’t run smoothly. Once on a trip to New York, I went into a bookshop and asked if they had any secondhand books. “Sorry, I didn’t catch that?” the cashier said. I repeated. He blinked. “I understand your words,” he finally said, “but I don’t know what you mean.” I explained that I’m referring to books that have been read before and are therefore offered at a lower price. He smiled broadly. “Used books,” he said and pointed me in the right direction.

Circling back to this pandemic, Mr Kor does get the shivers from other foreign words that had been incorporated into Hebrew. One of them is ‘capsule’ (kapsula). Why, he asks, couldn’t the government divide children into groups (kvutsot) or clusters (dvukot)? Every word draws an image. What was behind the first use of kapsula – a pharmaceutical pill? Or a coffee pod for espresso machines? Likely it was an adaptation from the US where kids were divided into pods. Like peas. But… alas, also like those small plastic coffee cups that are brewed in pressurized boiling water. Weren’t these metaphors meant to reduce our anxieties?

In the UK they chose different imagery – they have bubbles. While I like the soft sound of ‘a support bubble,’ I can’t ignore Merriam-Webster’s definition. A bubble is “something that lacks firmness, solidity, or reality, and is eventually due to burst.” And yet, now that we are capsule-pod-bubble-experienced, isn’t that the aptest term of the lot?

I do hope to fly to England this summer. The children miss it a lot and I desperately need an English rose garden where I could depressurize. But when we get there will we need to quarantine or self-isolate? The CDC claims there is a difference, but in this case I am content that both words are translated into Hebrew as bidud.

There were only 27 new positive cases in Israel in the last 24-hours. Have we really seen the last lockdown? That depends on the spread of variants (formerly, mutations). Still, I recommend keeping well away — either 6 feet or 2 meters — from anyone explaining droplet infection or, in Hebrew, hadbaka tipatit. In both languages, these phrases have a fair share of plosive consonants that induce some of the very thing they are referring to.

About the Author
Anat Hinkis-Atzmon lives and writes in Tel Aviv, though her mind often dwells in a London rose garden. Her writing appeared in Rain Taxi and Jerusalism. She received her her MA in Creative Writing from Bar Ilan University.
Related Topics
Related Posts
Comments