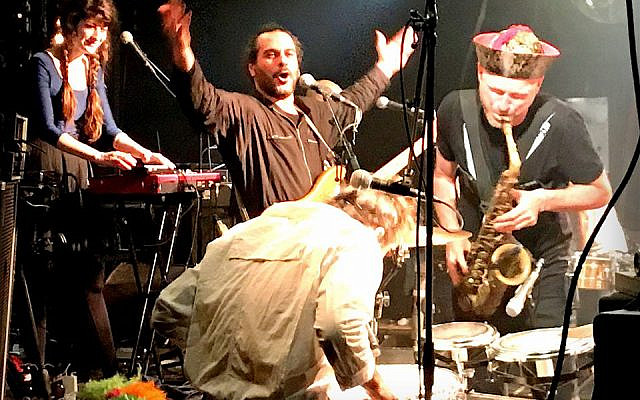 The uninitiated will find it curious, like a dog that suddenly speaks or a giraffe typing a letter. But I swear it’s true: Israel has produced a treasure trove of rock music. Not in the per capita sense but in every sense. I’ve rarely seen a more vital scene, and that’s worth saluting in otherwise dark times.

Some differences between societies are quantifiable: no one denies Israel’s tech sector is fantastically innovative, a world leader. But startups, exits, investments and patents can be counted. Cultural comparisons, being non-empirical, are touchier and fuzzier. Is Pachelbel’s Canon in D Major a finer work than the theme from “The Price Is Right”? One could claim so, but it is just an opinion.

So my contention that Israel has spectacular music rests on admittedly shaky ground. But I am emboldened by fellow Times of Israel contributor Yossi Klein Halevi, who recently found a receptive audience for his survey of “seminal” Israeli songs. My list is somewhat different from his loving and comprehensive chronicle of multiculturalism: I specifically argue the merits of what might be called Israeli classic rock.

It is my genre in general, and its global decline (in favor of an odd combination of medieval nostalgia and algorithm automation) is part of the aforementioned dark times. I am concluding there was a golden age of this kind of music, like there was for chamber music, and it is mostly gone. But I’m pleased to say that in Israel there are hardy souls who soldier on, and even add newfangled wrinkles every now and again.

That there is excellence here should in fact be no surprise, for Israel has at least three characteristics that support it:

This is something I discovered over the years to my increasing stupefaction. Back when there were record stores I would arrive on a visit, ask for the ten best new albums at the salesperson’s discretion, fork over funds and quibble no quibbles. I was rarely disappointed.

I am inspired to salute this phenomenon now for two reasons.

First, the dark times. Israel is governed by an unsavory mafia which is about to court disaster with West Bank annexations. As I am publicly critical of all those bad things, I feel dutybound to also highlight that foundation which is good. Much of the music below can be seen as songs of innocence, from a less benighted time. Perhaps music can help restore a sense of decency.

Second, the corona crisis has hammered artists, because live performances, which for many had become the main source of income due to the global decline in sales,  are not at present possible. The industry is in flux, creative solutions are needed, and the first step toward recovery is an understanding of how much they have to offer.

This abundance is something few outside the country know about, which means Israeli rock has not had much impact beyond the circle of knowledge. It also means there is a gap, and hence potential. Yet this potential can be hard to communicate, because great music often depends as much on the lyrics as it does on the melody, arrangement and performance. Two approaches to the language barrier present themselves: focus on instrumentals and lyrics-light pieces, or translate and hope for the best. I’ll  try a combination of both.

So without further ado, I offer this survey as a public service for music lovers everywhere. Readers who bear with me shall reap a rich reward.

Arik Einstein and Shalom Hanoch: “Lama Li Lakakhat LaLev” (Why Should I Take It To Heart)

These are the masters, whose 1970 album Shablool (Snail) that was the opening salvo that said the age of nationalist songs was over. There was a tremendous wave that accompanied them, but over the years no one could match these two. Einstein churned out one masterpiece after another until his death in 2013; try the idealistic Ani V’ata (You and I):

You and I will change the world / It’s been said already, before me / Doesn’t matter.

Tammuz: “Kacha At Ratsit Oti” (This Is the Way Your Wanted Me)

Hint: Not a very nice and polite way. Tammuz, from the mid-1970s, takes the edge up a notch.

And the father of Israel punk takes it up a further notch and risks falling off a cliff. He may not be completely sane (note the berserk instrumental section at 2:25) but he is smokin’, and there is much more where this came from, like the indisputable Death Is Not Underemployed and the hypnotic Sparks with Berry Sakharov, whom we shall hear from again.

To say the Polish-born Alberstein is Israel’s Streisand does not do her credit. She is often a writer of her own music, but here she is singing (as Einstein and others often do) high-end poetry.

I will be as a shadow passing over your fields / I have lived among you as a wildflower.

Artzi, who burst onto the scene in the early 1970s, has a melodic gift to rival anyone’s and the staying power of a Springsteen, enabled in part by his ability to project deep decency. He does great peace songs like “Eretz Hadasha” (A New Land) and at 70 still has groove – check out the recent “Katsefet” (Foam).

Danny Litani: “LeFetakh Har Gaash” (At the Foot of the Volcano)

Litani’s powerful voice drives this 1980s song which starts like a patriotic ode to villagers who insist on living at the foot of a volcano, an analogy to Israel suggesting defiant nationalism – then pivots to peace:

If they only understood they’re not alone / There are other villages around them / And these villages house human beings like them / And only if they learn to live together / The mountain will bloom.

Mashina is still around and have produced an incredible body of work. This high-propulsion tune,  from the late 1980s, is not even one of their countless hits. For something largely instrumental, try Rikud Hamechona (The Machine Dance).

The Friends of Natasha: “Im Kvar Levad…” (If I Must Be Alone…)

Natasha were a groundbreaking group fronted by the Soviet-born Arkady Duchin and Moroccan-descended Micha Shitrit, and in the late 1980s and 1990s were the downbeat answer to Mashina. This song is about loneliness, yet reflects a form of togetherness when the vocal shifts from Shitrit to Duchin at 3:18. For a gentler tune try “Sham” (There):

Ah, but when Natasha broke up and Shitrit struck out on his own it became clear that he is the MAN. This is the title song from “Nails and Feathers,” which contains excellent instrumental interludes at 3:00 and 4:25. And check out El Nino (about the uncontrollable event that will “come and shut down whatever is still open, sharp and clear, without any discussions.”)

Ashdot, a key member of the 1980s group Tislam, cannot seem to do anything that is not excellent, yet this is my choice, perhaps because it reminds me of the French classic from Noir Desir, “Aux sombres heros de l’amer.”

Knesiyat Hasekhel (The Church of the Mind): “Ani Maamin” (I believe)

Some Sephardi influence in this orchestral ode from these rockers from the south.

Poliker, who started off in the 1980s rock group Benzin, then explored his Greek roots, then turned geuine head-banger, then fused everything together into something distinctly his.

This haunting piece by the incomparable Sakharov came out at the height of the Second Intifida. His music is powerful, dark, melodic and modern. And almost everything he does is equally evocative of some otherworldly spark.

It was Tamir’s only hit, a sad love song, but she made it count.

The knight of my dreams who came from another fable / Maybe we innocently loved too many songs.

Jazzy and cool, this band led by Gilad Kahane is part of small vanguard that salvages the honor of the 21st century as it hangs by a thread.

The masters reunited in 1999, 30 years after the begtinning, for what turned out to be a last hurrah. This edgy song starts off cynical …

.. until Chanoch ends it by taking a stand:

Which is a high note on which to end. But every concert needs an encore, and if you made it this far, you certainly deserve a song in English. Here is “I Trusted You” by the manic contemporary hothouse called Balkan Beat Box. I recently saw them blow the roof off a club in Tel Aviv. Returns to normalcy allowing, I recommend that experience to anyone who agreed that Pachelbel’s Canon was objectively the answer.