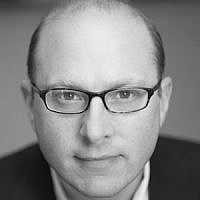 The Blogs
Mark Goodman
Apply for a Blog
Please note that the posts on The Blogs are contributed by third parties. The opinions, facts and any media content in them are presented solely by the authors, and neither The Times of Israel nor its partners assume any responsibility for them. Please contact us in case of abuse. In case of abuse,
Report this post.

The profane din of this political moment is seemingly inescapable.  But as this week’s Torah portion (Ex 27:20 – 30:10) suggests, the creation of sacred space is never simple, never without an intentional setting apart, never without concentrated effort.  The Torah, of course, describes a specifically Jewish sacred space, but its resonance need not be limited.

The Parasha describes the consecration ceremony for Aaron and his sons.  They are to become the Israelite’s priestly clan.  The narrative begins with a command: “You shall bring forward your brother Aaron with his sons, from among the Israelites, to serve me as priests.” The main characters have been summoned and the plot is initiated.  God has selected Aaron and his sons for a symbolic transformation; they are to be set apart from the rest of the Israelites who are then enlisted in the consecration; once consecrated the Priests will stand between God and the people as intermediaries.  But the consecration itself is a process; it is initiated not completed by their having been chosen.

The details of the ordination are clearly meant to dazzle: Aaron and his sons are bejeweled with exotic stones, laden with symbols, and enrobed in luxurious materials enlivened with vibrant colors.  Every vestimentary detail is specified and elaborated.  It’s meant to be a riveting display, enthralling the Israelites in a spectacular world of appearances.

And then things get messy.  Rams and a bull are brought on the scene and the blood flows: a narrative of dismemberment, of guts and fat, of smells and tastes, of dashing, smearing, burning and eating.  We transition from outward appearance to a literal extroversion of flesh.

Dazzled by appearances and enthralled by bloody rites, we are immersed in the plot, but the theme is drowned out by the sensuous cacophony.  Where are we and why?  Suddenly, quietly a previously submerged melodic line comes to the surface and reminds us.  We are…

We’re in the Tabernacle, the Tent of Meeting, of encounter, where “Adonai may dwell among them,” a sacred space for divine presence.   The Priests are set apart for a reason: to mediate flesh & spirit, to effect a transubstantiation of the holy from outward to inward, profane to sacred, distance to intimacy.

About the Author
Mark Goodman is active in American Jewish communal life, serving on the Boards of the U.S. Holocaust Museum in Washington, D.C. and Temple Israel of Boston. He was a member of the Obama National Finance Committee from 2007-2012, speaking on behalf of the campaign regarding Israel policy and other issues. He completed a PhD in Philosophy at Boston College. He is currently a venture capitalist living in Cambridge, MA.
Related Topics
Related Posts
Comments