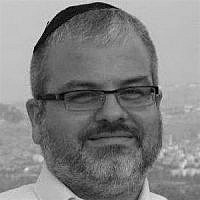 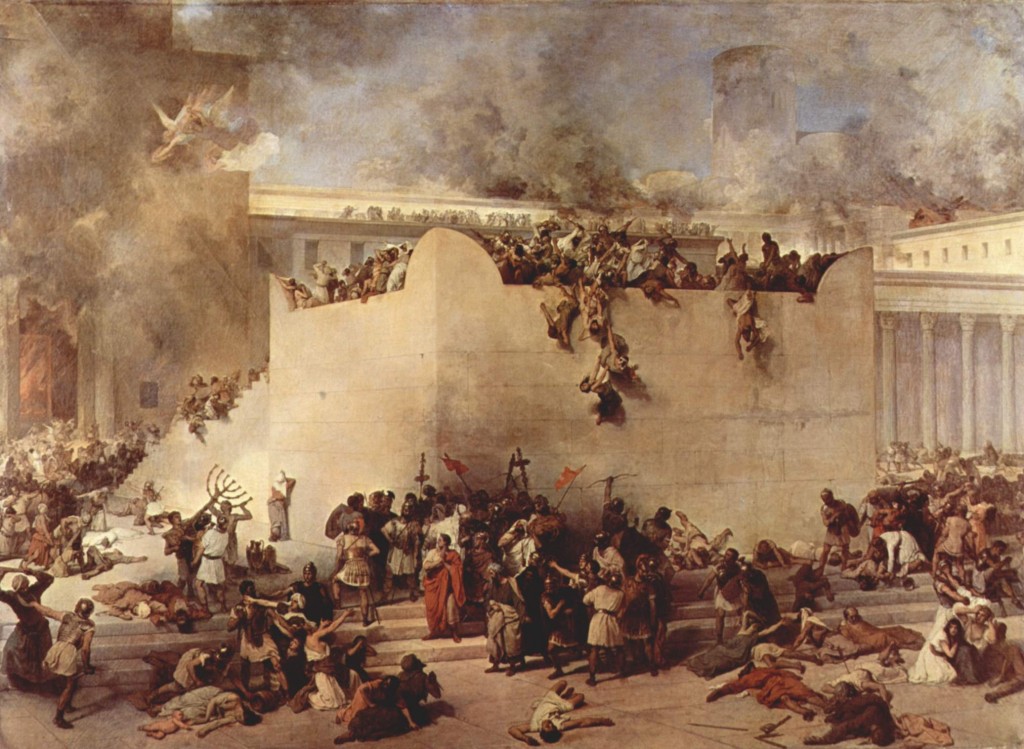 The destruction of the Temple of Jerusalem by Francesco Hayez [Public domain], via Wikimedia Commons

As we enter the week of Tisha B’Av, the most tragic date on the Jewish calendar, many have the practice of reviewing the stories from Hazal of the Hurban Habayit, the destruction of the Temple and its aftermath, the majority of which appear in the Talmud in Tractate Gittin pages 55-58.

Rav Zadok HaKohen in his work Peri Zadik on Bereishit explains that this is not coincidental. Everything in the Talmud is in its purposeful place. This applies not only to the legalistic sections of the Talmud but to the Aggadah, the homiletic sections, as well. The Talmudic texts about the Hurban are in Masechet Gittin which deals with the laws of the divorce because the destruction of the Temple and the resultant exile of the Shehina, God’s heavenly presence, is akin to a divorce between God and the Jewish people.

Rav Zadok elaborates that not only is the tractate in which an Aggadah appears carefully chosen but the chapter as well. The stories of the Hurban appear in Gittin Chapter 5 also known by its first word, HaNizakin, the Damages. Unlike much of Masechet Gittin, HaNizakin discusses damages not divorce. With the Hurban God’s presence appears to leave the Jewish people. However, God never truly severs his relationship with his people since the covenant between God and the Children of Israel is everlasting. Rather, the Hurban is more like a Nezek, with the relationship becoming damaged, but never truly broken.

God was actually doing a favor to his people through the damage wrought with the Hurban as illustrated by the following Talmudic story which appears at the end of the Tractate Makkot 24b.

On another occasion they [Rabban Gamliel, Rabbi Elazar ben Azarya, Rabbi Yehoshua, and Rabbi Akiva] were ascending to Jerusalem after the destruction of the Temple. When they arrived at Mount Scopus and saw the site of the Temple, they rent their garments in mourning, in keeping with halakhic practice. When they arrived at the Temple Mount, they saw a fox that emerged from the site of the Holy of Holies. They began weeping, and Rabbi Akiva was laughing. They said to him: For what reason are you laughing? Rabbi Akiva said to them: For what reason are you weeping? They said to him: This is the place concerning which it is written: “And the non-priest who approaches shall die” (Numbers 1:51), and now foxes walk in it; and shall we not weep?

Rabbi Akiva said to them: That is why I am laughing, as it is written, when God revealed the future to the prophet Isaiah: “And I will take to Me faithful witnesses to attest: Uriah the priest, and Zechariah the son of Jeberechiah” (Isaiah 8:2). Now what is the connection between Uriah and Zechariah? He clarifies the difficulty: Uriah prophesied during the First Temple period, and Zechariah prophesied during the Second Temple period, as he was among those who returned to Zion from Babylonia. Rather, the verse established that fulfillment of the prophecy of Zechariah is dependent on fulfillment of the prophecy of Uriah.

Based on Rav Zadok, the presence of this story in Makkot which details the laws of punishment through lashes is perplexing. Would not this story about the aftermath of the Hurban be more appropriately placed in Masechet Gittin? A closer analysis of the greater context in which this story is placed is necessary to unravel its overarching message.

The last Mishna in Makkot (23a), one page prior to the Rabbi Akiva story, describes one who receives lashes for a sin whose punishment is Karet, a much more severe heavenly punishment where one is forever cut off from the Jewish people. Rabbi Hananya Ben Gamliel explains that once such a person is flogged, they no longer are subject to the punishment of Karet.

MISHNA: All those liable to receive karet who were flogged are exempted from their punishment of karet, as it is stated: “And your brother shall be debased before your eyes” (Deuteronomy 25:3), indicating: Once he is flogged he is as your brother, as his sin has been atoned and he is no longer excised from the Jewish people; this is the statement of Rabbi Ḥananya ben Gamliel.

This shocking Mishna asserts that even one who ate on Yom Kippur and is therefore subject to Karet and effectively removed from the Jewish people, by getting lashes and repenting can receive atonement and once again rejoin the Jewish people to be considered as a brother in every respect. The idea expressed is that sometimes punishment can be a necessary component of the process of repentance. Sometimes one must first hit rock bottom in their downward spiral of sin in order to be able to pick themselves up and return to God.

Towards the end of both the first and second Jewish commonwealth, the Jews had sinned so heinously that God wished to sever his relationship with them. He wished so to speak to file for a divorce. However, he had already made an unbreakable covenant with the Jewish people. God, in his mercy, chose to point his wrath towards damaging a building, the Temple, rather than his people. This is the message of the placement of the stories of the Hurban in HaNizakin, the chapter of damages, in Masechet Gittin.

Only after this process of damages is complete, once the Jews have finished receiving their flogging so to speak, can the process of reconciliation and redemption begin. This is the message of the last Mishna in Makkot and the placement of the Rabbi Akiva story shortly thereafter. In order for the punishment to be complete, the Temple needed to become so desolate that it was no longer a home for God or any human being for that matter. Rather it was a haven for foxes. It was for this reason, that Rabbi Akiva laughed when he saw the fox running through the Holy of Holies. Rabbi Akiva knew that since the punishment was now complete, the Jews had received their 40 lashes, the Jewish people could once again return to their original close relationship with God. The time for the prophecies of joyful redemption could begin. And hopefully soon Jerusalem can become so rebuilt that not only will children play outside but elderly men and elderly women will be sitting in the streets of Jerusalem as well. May we merit to see the completion of this redemption speedily in our days.

One can read a source sheet for this article here.