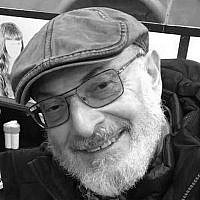 The Blogs
Ephraim Yeshosha Bob Dale
Why aren’t there any rich economists?
Apply for a Blog
Advertisement
Please note that the posts on The Blogs are contributed by third parties. The opinions, facts and any media content in them are presented solely by the authors, and neither The Times of Israel nor its partners assume any responsibility for them. Please contact us in case of abuse. In case of abuse,
Report this post.

As an oleh chodosh who recently marked his third anniversary in Israel, I’d like to sound off about one of my biggest complaints. I’m talking about the absence of what was called, in my native country Canada, customer service. Many anglos say that’s only an oxymoron in Medinat Yisroel.

I’ll demonstrate with my most recent example. My wife just celebrated her birthday. She is a voracious reader, so I decided to surprise her with a tablet computer, where she could use apps like Kindle and Kobo to download books. Since first learning to use a computer 45 years ago, Elaine has been a PC person, while I prefer Apple products. So somehow nonsensically, I went to an authorized Apple dealer to buy her an iPad.

The salesperson went over the options, and I decided on a particular model. Before completing the purchase, I confirmed that English-language instructions on setting it up were included in the shrink-wrapped package. She assured me that they were. It turned out there were no instructions at all, in any language. Elaine and I proceeded anyhow, and after a while, found ourselves locked out, needing a password we had neglected to write down. I can usually figure out how to fix computer problems, but not this time.

I returned to the store, where they seemed as confounded as I was. I made several suggestions, none of which seemed to merit any serious consideration. The lady told me to leave the iPad for a few days, and they would work on it. Two days later a man called, saying the problem had been solved, but that my wife needed to come to their store with me since we had inputted her thumbprint as a way of opening the machine. We hurried there, but no luck. The problem was worse than before. I suggested a possible solution the technician might want to try, but after looking at me – an anglo in his 70s and who therefore, for both reasons, obviously knew nothing about computers – told me it wouldn’t work. I had found that solution on the Apple website, but that didn’t seem to impress him. As we had never actually used the iPad, I then asked for an exchange or refund. That’s when the real fun began.

The technician started to yell at me, saying that it was Elaine’s fault that the problem had occurred, and that they had no obligation to return the machine to Apple for an exchange; or refund my money. Sadly, this wasn’t the first time since making aliya that I had approached someone in a store because of a problem with an item, only to be told that I must have done something to it and that it was therefore my fault. I couldn’t help but think back about five or six years, when I had had a problem with another product in Canada, and the store clerk had immediately exchanged it for another. In that case, it turned out that my original purchase had had a built-in fault.

Back to my iPad story. The technician retreated to the backroom, behind an electronic door, and let us sit in the waiting area for over an hour while he tried to figure out a solution. Finally, another employee appeared, and told us they had decided to send the machine back to Apple to restore it. I didn’t dare mention that this had been one of my first suggestions, and that it had been rejected out of hand.

As of this writing, we’re still waiting for our iPad.

So much for this story. But as per my experiences, it shows a lot about how staff people at Israeli businesses too often deal with customers. I wonder whether they might consider a more customer-friendly approach, and not only to people who have problems with items purchased. That approach would have the following components, at a minimum.

1. When a potential buyer comes into your store, ask if you can help him or her. Do not continue to browse your cellphone for the latest SMS, Snapchat, or Tok-tok posting and ignore that person entirely until you have finished what you are doing. And do not (as often happens) stand around socializing your colleagues while the customer waits to be acknowledged.

2. Be knowledgeable about the products you sell, instead of telling the potential customer you don’t know; or making up an answer that may or may not be accurate.

3. Don’t assume that someone whose Hebrew isn’t up to speed, or is an older person, is totally ignorant about technical issues. I’m not just talking about computers. In response to a question I asked, the woman at my bank branch felt she had to first simplify banking basics to me. She apparently couldn’t even begin to imagine that this septuagenarian is a retired economics professor with a degree from one of the best universities in the world. I could probably teach her and the people she works with, including her manager, a lot more about banking basics than they currently know.

4. When dealing with a customer about an important issue, ask your workmates not to come over to show you their latest family pictures; or discuss after-work plans. This shows the customer that he or she isn’t your priority.

5. Once you have rung up a purchase, put it in a bag with the receipt and hand it over with a thank-you and a smile. Do not toss both at the customer and hurry back to your cellphone to see if anything important has happened in your absence.

6. If a customer has a problem with a product they have bought from you, don’t immediately tell them that it’s because they’ve done something to it, and that it’s all their fault. Yes, sometimes that may be true. But the vast majority of time when I have had a problem with a product, it was caused by the product itself. Or because the instructions were unclear. Or as in the above case, because they weren’t included in the package at all.

All this leads to my final recommendation, the need to implement an overall shopper-friendly philosophy. The customer may not always be right, but always act as if he or she is. It will gain you repeat business and client loyalty. Especially from olim who have learned in their past lives that customer service isn’t an oxymoron at all.

About the Author
Ephraim Yehoshua Bob Dale is a retired economics professor who made aliya from Ottawa, Canada. He served on the communications committee of the Jewish Federation of Ottawa for some 10 years. He was also a journalist, and wrote a regular column in the Ottawa Jewish Bulletin and Review. Bob frequently published op-eds in local and national media.
Related Topics
Related Posts
Comments