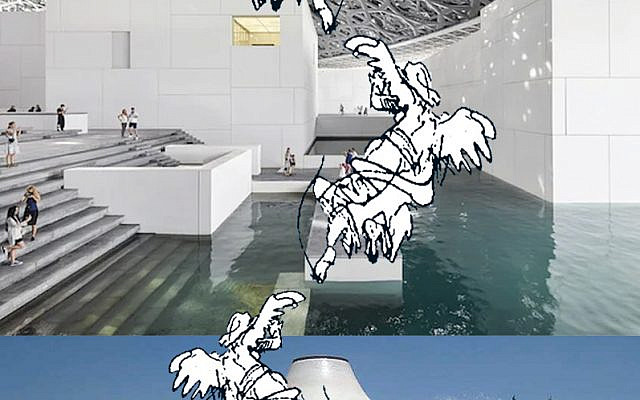 I am launching cyberangels of peace on flights from Israel Museum to Louvre Abu Dhabi. These digital flights of Rembrandt-inspired cyberangels honor the signing of the Abraham Accord between Israel and United Arab Emirates and Bahrain in Washington.

This historic event forging ties between Israel and its Arab neighbors occurs during the year that Rembrandt is being honored on the 350th anniversary of his death by museums from Leiden where he was born, to Amsterdam where he established his art studio, to Oxford, Madrid, Ontario, New York, and Abu Dhabi.

Louvre Abu Dhabi presented the exhibition Rembrandt, Vermeer & the Dutch Golden Age, masterpieces from The Leiden Collection founded by the American Thomas S. Kaplan whose wife Dafna is the daughter of Israeli artist Mira Recanati. Dr. Kaplan writes “More than any other painter’s legacy, we believe Rembrandt’s ability to touch the soul represents a uniquely fitting expression of this visionary Franco-Emirati project seeking to promote tolerance and the common civilization of mankind.”

I document the digital flights from Israel to the Emirates on my blog Global Tribute to Rembrandt. I created an artwork that shows a cyberangel of peace ascending from the Israel Museum’s Shrine of the Book, where the oldest Bible texts are exhibited, and entering into the Louvre Abu Dhabi.

My blog also documents cyberangel flights from Israel to thirty museums on five continents that have my Rembrandt-inspired artworks in their collections. These images are augmented by texts on the impact of digital culture on contemporary art based on my research as art professor at Columbia University, research fellow at MIT Center for Advanced Visual Studies, and professor at universities in Israel. 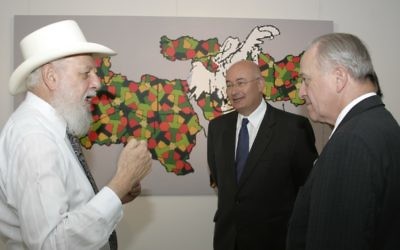 Cyberangels: Aesthetic Peace Plan for the Middle East, my 2004 exhibition at the Jewish Museum in Prague anticipated this historic event on the White House lawn. The exhibition highlights aesthetic values derived from Islamic art that invited a perceptual shift through which Muslims see Israel as a blessing expressing Allah’s will rather than as an alien presence in the midst of the Islamic world.

Weavers of beautiful Islamic carpets include a small counter pattern in their designs that can symbolize a small Jewish state living in peace surrounded by many friendly Muslim states. My blog Aesthetic Peace includes testimony from Islamic leaders on the religious validity of my concept of aesthetic peace. The photo above shows me explaining my aesthetic peace plan to the ambassadors of the United States and Israel.

One of my Digital Homage to Rembrandt cyberangel artworks has been in Washington in the collection of The National Museum of American History since 1987 as a historic exemplar of computer-generated fine art printmaking. These cyberangels that have been dormant in the museum’s flat files have awakened in 2020 both as a tribute to Rembrandt and to the historic Abraham Accords uniting the decedents of Abraham’s two sons Israel and Ishmael.

My cyberangel flight from Israel to the Gulf coast was preceded by a cyberangel faxart flight around the globe via AT&T satellites on the 320th anniversary of Rembrandt’s death. On the morning of October 4, 1989, it ascended from New York, flew to Rembrandt House Museum in Amsterdam to Jerusalem to Tokyo to Los Angeles, returning to New York on the same afternoon. When it passed through Tokyo, it was already the morning of October 5th. Cyberangels cannot only fly around the globe, they can fly into tomorrow and back into yesterday. 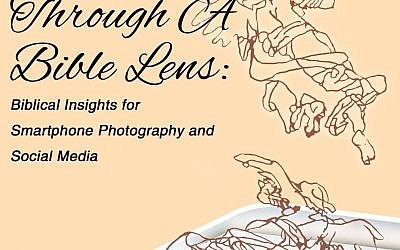 I was invited to create one of my early Rembrandt-inspired cyberangel artworks by the Israel Museum affiliated graphics center in Jerusalem at the time I was head of the art department at Pratt Institute in New York where I taught “Fine Art with Computers.” It shows cyberangels ascending from a NASA satellite image of the Land of Israel as an expression of the biblical commentary that the angels in Jacob’s dream go up a ladder from the Land of Israel and come down to earth throughout the world. This serigraph is in the collection of the Israel Museum.

These cyberangels emerge from a smartphone screen on the cover of my most recent book Through a Bible Lens: Biblical Insights for Smartphone Photography and Social Media. A smartphone has the power to make this biblical vision a reality.

Before partaking of the Sabbath eve meal, Jewish families sing, “May your coming be for peace, Angels of Peace, angels of the Exalted One.” The song begins with the words shalom aleikhem (may peace be with you).  Shalom aleikhem is the traditional Hebrew greeting when people meet. It is akin to the Arabic greeting salam aleikum. Indeed, the word Islam itself is derived from the same root as salam (peace). May the Hebrew Malakh Shalom and the Arabic Malak Salam be recognized as one and the same Angel of Peace.